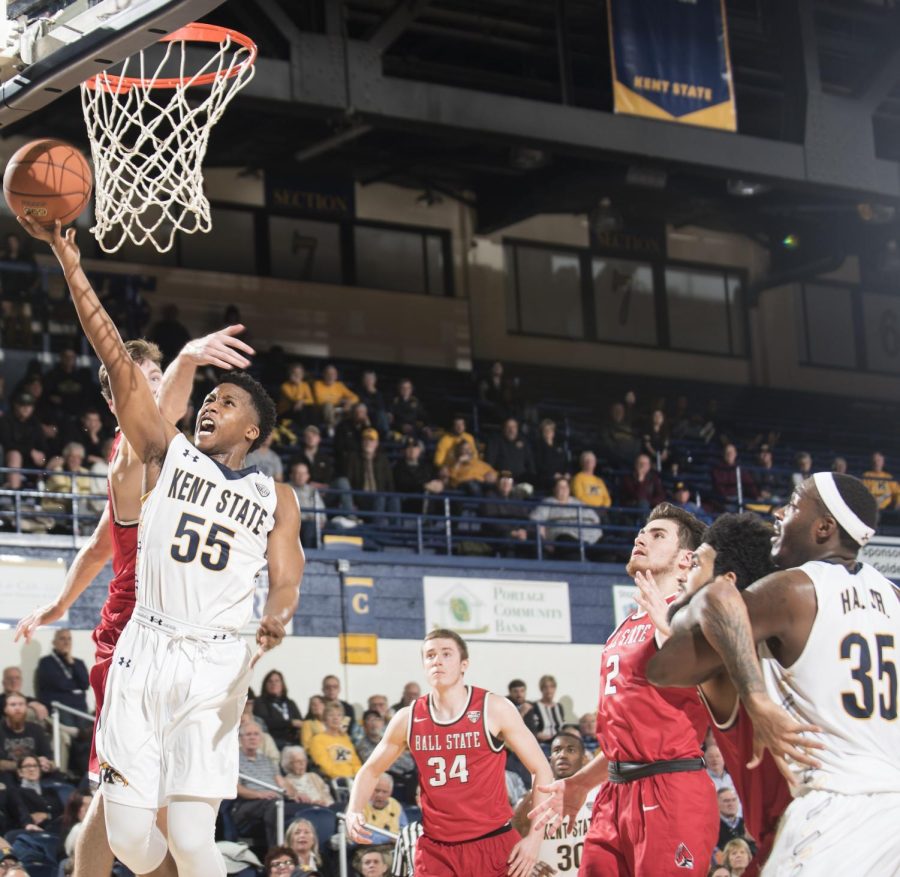 Junior guard Kevin Zabo of the Kent State men's basketball team scores a layup in the second half against Ball State University at the M.A.C. Center on Tuesday, Jan. 3, 2017. The Flashes opened MAC Conference play with a victory, 100-90.

But Tuesday at the M.A.C. Center, the Flashes’ winning streak over their MAC West foe wasn’t in jeopardy thanks to Hall and Walker.

Walker —who was tabbed as the MAC’s East Division Player of the Week for his performance in a win over the University of Texas on Dec. 27 — led all scorers with 21 points, 17 of which came in the first half. Hall chipped in 20 points and nine rebounds in 36 minutes of play.

The Flashes were perfect from the free-throw line, finishing 31-31 from the charity stripe and setting a new MAC record. The team fell only three makes short of an NCAA mark that has only been accomplished only three times prior.

It was also the first time in program history that a Kent State team shot 100 percent from the stripe.

“We’ve been a good free throw shooting team all year,” Senderoff told Kent State Athletics. “Tonight was very exceptional, and was a once in a lifetime sort of thing … 31-for-31 is the MAC record, so that’s not going to happen every night.”

After junior Sean Sellers hit a three-pointer early in the game to give Ball State a 3-0 advantage, Kent State went on a 7-0 run, capped off by a senior Deon Edwin three-point play.

The Ball State offense was able to keep pace with the Flashes for most of the first half, and senior Ryan Weber knotted the score at 46 with 38 seconds left on a shot from beyond the arc that rattled in.

Walker, though, answered with a three of his own on Kent State’s next possession to put the Flashes up heading into the locker room.

Both teams proceeded to match each other shot-for-shot during the first three minutes of the second half until a junior Kevin Zabo three broke a 53-53 tie.

Redshirt freshman Tahjai Teague’s layup with 13:27 remaining gave the Cardinals a one-point lead, but Hall responded by converting both of his free throws to put Kent State ahead for good.

Ball State continue to hit shots, though, and climbed within seven with 1:20 remaining. However, junior Desmond Ridenour made six consecutive shots from the charity stripe to seal the victory.

Kent State continues MAC play Friday against Ohio University in Athens before returning for a home game on Tuesday.