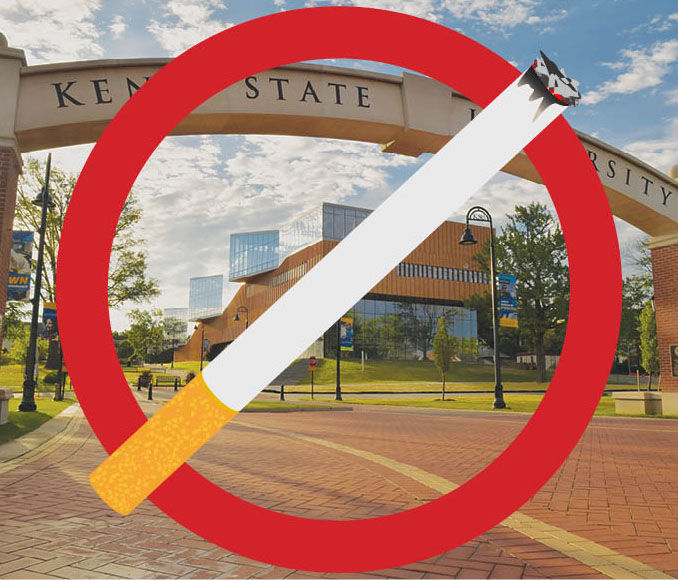 Colleges and universities have implemented smoking bans on campuses across the country. According to the Ohio Department of Higher Education, 25 Ohio schools have recently declared their campuses as either smoke-free or tobacco-free, and eight schools are considering or transitioning to a smoke-free campus.

In 2012, the Ohio Board of Regents unanimously passed a resolution recommending that Ohio’s colleges and university trustees ban the use of tobacco products campus-wide. Tobacco-free policies would include banning the use of e-cigarettes, chewing tobacco and vaporizers.

“I think the overall message was we want everybody to live longer, healthier lives, and [we want to] do whatever we can to help that,” said Jeff Robinson, director of communications for the Ohio Department of Higher Education.

Though the tobacco-free policy was not mandatory for Ohio schools and universities, many chose to pass these initiatives including Cuyahoga Community College, Kent State and Cleveland State University.

Tri-C enacted a “breathe free” policy last August, which bans the use of any tobacco products while on campus grounds. The policy also affected regional campuses.

“Colleges are either going smoke-free or tobacco-free, and we know from a health perspective that it’s not just cigarettes that can pose a danger,” said Meghan Estes, Tri-C director of Health and Wellness. “We went tobacco-free because, first and foremost, it’s the right thing to do. We would be joining close to 1,500 other colleges and universities across the U.S. who are doing this.”

The Tri-C Board of Trustees unanimously approved the policy in May “to support a healthy environment for students, staff and visitors at the college,” according to the Breathe Free Tri-C webpage.

The new policy also prohibits students and faculty to smoke in their personal vehicles, which Estes said has been a challenge for the university.

Estes said the campus made the decision to go tobacco-free after receiving a $5,000 grant from Truth Initiative, a nonprofit public health organization. Tri-C used the grant to spread awareness of the new policy, purchase signs and to participate in the American Cancer Society’s annual Great American Smokeout held in November, which encourages people to stop smoking.

Each school implementing these policies have worked on their own timetable, Robinson said. Some adopted the policy to be effective immediately while others took between six months to a year to start.

Tri-C board members discussed the policy for a year before putting it into effect. During this time, Estes said the university conducted student and staff surveys. Overall, Estes said the students and faculty supported the initiative.

“We had very good response from both employees and students,” Estes said. “For the students who responded and the employees, people were strongly in favor of the college going tobacco-free.”

The University of Akron has considered a ban on smoking but has not passed the policy. The current smoking policy complies with Chapter 3794 of the Ohio Revised Code, which states smoking is prohibited in public places, places of employment and enclosed areas. Akron’s policy also prohibits smoking within 25 feet of a building entrance.

Kristine Kraft, director of Medical Assisting Technology and Healthcare Simulation Technology, said more than half of Akron’s student population went against the smoke-free policy and wanted smoking to be permitted outdoors.

Kraft said 82 percent of respondents believed tobacco use on campus did not negatively affect their attitude toward Akron. Although 59 percent of students said tobacco use should be regulated, 50 percent believed some nicotine products such as smokeless tobacco, vaporizers and e-cigarettes should be allowed outdoors in specified locations.

While the university was unable to implement the new policy in September 2014, Kraft said the University Council recommended a new policy to the President Scott Scarborough in April 2016.

“With the progress of the current policy recommendation, we are hopeful to have this policy passed soon and work with campus partners to support healthy and active lifestyles around this policy,” Kraft said. “I feel this cause is being supported on campus with our health professionals, as well as those in the surrounding community.”

Vice President of Student Affairs Shay Little said the university purposely built a year gap between the adoption of the policy and its implementation as part of a Centers for Disease Control and Prevention recommendation.

Little said the year will allow the university to spread awareness of the new policy and to begin the policy at the beginning of a new academic year.

Kent State discussed becoming a smoke- and tobacco-free campus as early as three years ago. The university established a task force to discuss issues surrounding adopting a new policy such as the use of e-cigarettes and smokeless tobacco on campus. A variety of surveys were also given to students and staff.

“All those things really propelled the discussion forward, and we felt that recommending this policy to the Board of Trustees … actually would be a key stepping point in changing our campus culture to one of health,” Little said.

Burkett said while there is an overall decrease in tobacco use among adult populations in the U.S., there has been an increase in college-age students between 18 years and 24 years of age.

“During my tenure here we are really increasing emphasis in promoting tobacco-free policies in college campuses because there’s a lot of evidence base that tells us that the adoption of these types of policies have a three-fold effect on tobacco use in the college-age students,” Burkett said.

She also said the Department of Health is in the midst of developing a toolkit for schools to use as guidelines on how to enact a new smoking policy. Burkett said the bottom-up approach is the most successful because it allows students to voice their opinions on the policies.

“Personally, I think the biggest benefit is the decrease in initiation of smoking of young people because this is one of the strongest preventive things we can do,” Burkett said. “Smoking and the exposure to the chemicals and the toxins from smoking are related to damage of every single organ in the body and many, if not all, of chronic health conditions.”

According to the CDC, 99 percent of smokers tried tobacco before age 26. Burkett said if smoking in college-age students can be prevented through a smoking ban policy, it would be unlikely these students would become smokers after graduation.

“That’s really going to be the health impact of smoking and tobacco-related diseases are currently the single most preventable cause of death in the United States,” Burkett said. “This is an important issue for us to take on and to focus on.”

Samantha Ickes and Jacob Derwin are contributors, Jimmy Miller is the editor. Contact him at [email protected]