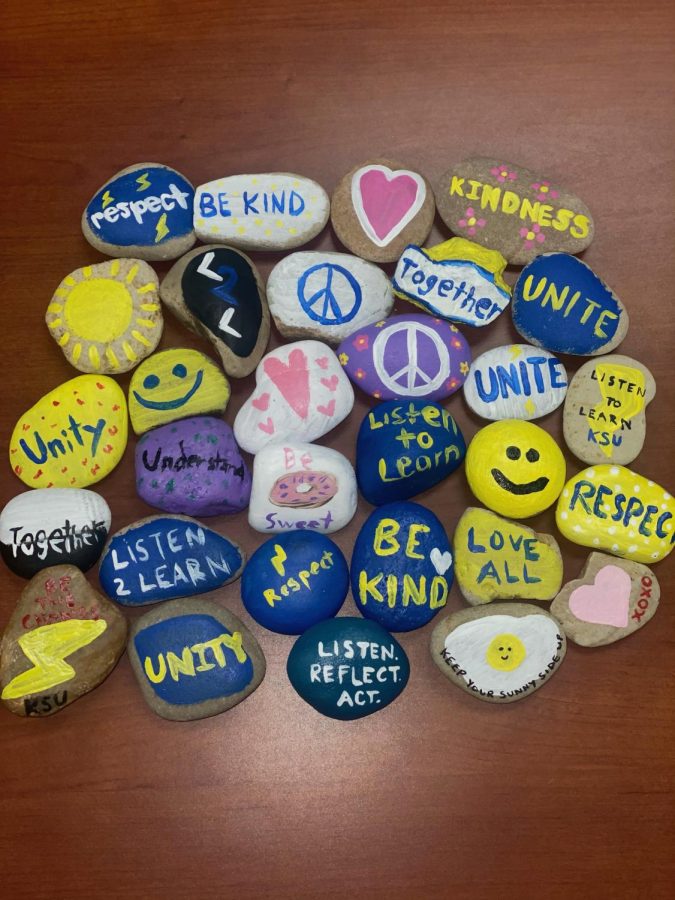 Photo of rocks from the “Civility Rocks” campaign.

The annual competition for PR students is reaching its final stretch after COVID-19 presented the participating teams with challenges not unlike last year when an abrupt transition moved the competition online in March 2020.

The Public Relations Student Society of America puts on the annual Bateman Competition, which is the prime case study competition for public relations students.

This year’s teams are now in the process of compiling their research to send in a 58-page case book PDF to the panel of judges by 2 p.m. March 29, 2021.

After submitting their work, the teams will wait until April 14 for the judges to choose three finalist teams out of all the entries nationwide. Last year there were 57 entries and out of them there were 14 honorable mentions and three finalists.

Kent State has placed in this competition in the past, and last year’s Bateman Gold team was on that list of honorable mentions in spring 2020.

The winner of the top three teams will be recognized in October at the Awards Ceremony and Dinner at the PRSSA 2021 International Conference.

Because the transition back from online still hasn’t happened, the teams have yet to face an abrupt change like last year. However, they still have to adjust to reaching the audiences of their campaigns in an online setting.

“It’s obviously more challenging running a campaign during a pandemic, and they can’t actually go into the classrooms and talk to their audiences,” said Stefanie Moore, a media and journalism professor supervising the Bateman teams for a third year in a row. “Now they just have to rely on the technology, and there can be a lack of response sometimes.”

The goal of this year’s competition is to create a civility campaign with this year’s client, the Public Relations Society of America. Kent State has two teams: Blue and Gold.

Gold ran a campaign titled “Listen to Learn KSU” to spread awareness toward creating civil discourse, while Blue ran a campaign focusing on civility within the media. Both teams used tactics to reach their audiences.

Students were encouraged to post pictures online and tag @listentolearnksu when they found one of the rocks for a chance to win a prize and be posted on the team’s Instagram page, Brady Warmbein, a junior PR member of Gold, said.

The team also ran a campaign on its Instagram page called “To Unity and Beyond Week,” where it shared quotes and videos from faculty and students about civility.

“With PRSA, the goal is to bring awareness to incivility as an issue and show that it’s not impossible to foster civil discourse and get to a place of unity,” said Izzy Stewart, a junior public relations major on Gold’s team.

The teams had to find audiences that they thought would be the best recipients for the messaging of civility.

“A big part of why we chose the audiences of PR students and political science students is because we found in our research that those individuals are going to be the ones to model civility and really be those opinion leaders that are going to make a change and start a conversation about incivility,” said Zoe Blank, a senior on Gold’s team studying PR and psychology.

Blue ran a campaign about civility in the media, and it focused on audiences including student media members at Kent State and within that the freshmen in the College of Communication and Information as well as PR students, Zachary Zdanowicz, a senior PR major and member of Blue, said.

The Blue campaign used different tactics and events from Gold and offered a socially distanced in-person event with its freshman audience in CCI.

“We had a table in Olson Hall, and we created brochures for the students that had all the information about what civility in the media looks like as well as our pledge, quotes from our research and a link to our MDJ Mingle event,” Zdanowicz said.

Blue was also online, where podcasts with leaders of student media led up to its “MDJ Mingle” event holding a panel discussion for students.

“We did three sets of podcasts and invited the guests back from the podcasts to be in our event while also collaborating with Akron PRSA,” said Kayla Polansky, a sophomore PR major on Bateman Blue.

“The research the teams did up-front, even over break, diving into their secondary research,” Moore said, “all of that really informed what they were going to do, so their tactics were very smart — fun, but smart.”