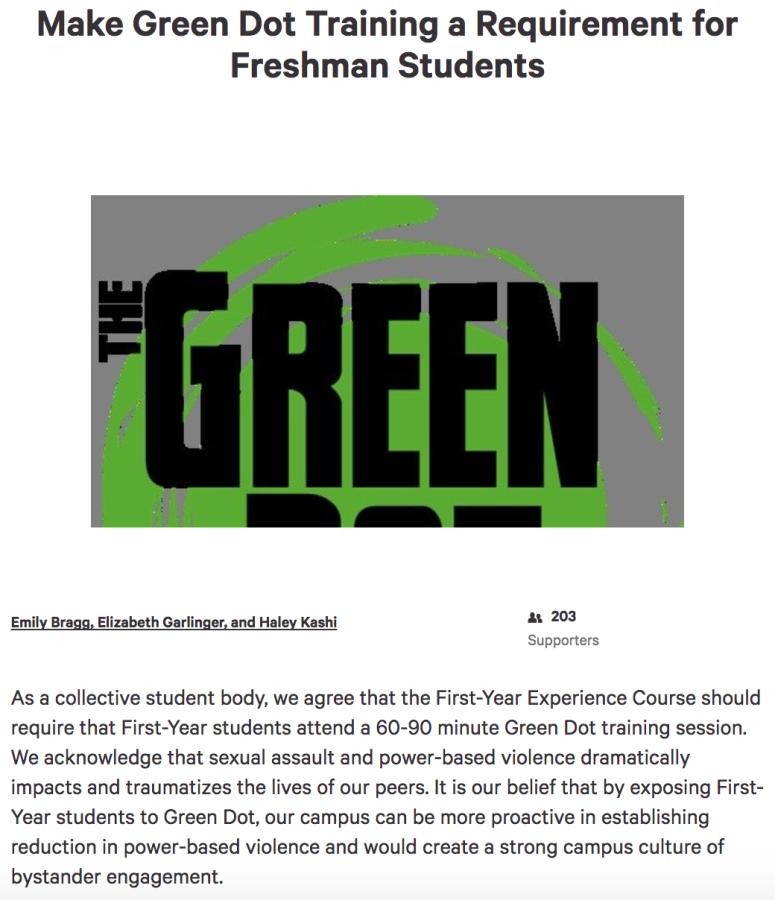 During the Fall 2016 semester, Elizabeth Garlinger, Haley Kashi and Emily Bragg were presented with a project in associate professor James Ponder’s communication influence course: create a meaningful campaign that could change the world in a profound way.

“When we looked at it, we were like ‘well this is a really really vague ending topic,’” said Garlinger, a senior communication studies major. “But what can we do? So Haley and I proposed — and Emily later joined — that we would address sexual assault on our campus.”

The women decided the best way to educate the community was by implementing mandatory Green Dot training in Kent State’s curriculum. Introduced to campus in the Fall 2014 semester, the Green Dot Strategy aims to “approach for the prevention of power-based personal violence that relies on the power of cultural and peer influence,” according to the program’s website.

Currently, the program is open to any campus group or class that voluntarily asks to receive the training.

“We love that we go to Kent and it’s a very progressive school and it’s very concerned about the safety of its students and that’s very evident in even just the A.L.I.C.E. training,” Garlinger said. “So we thought … ‘OK, we do A.L.I.C.E. training and protect ourselves from on campus shooters, why aren’t we addressing sexual assault and power based violence in a real way?'”

The group created a petition at change.org urging members of the community to sign in support of mandatory 60 to 90 minute Green Dot training sessions in all freshman First-Year Experience classes. As of the time of print, the petition has garnered 203 signatures out of their aim of 500.

Despite not yet reaching 500, Kashi said that she’s not worried about missing the opportunity of making their goal a reality. They have the support of Jennifer O’Connell, director of the Office of Sexual & Relationship Violence Support Services and Green Dot trainer, and Undergraduate Student Government has reached out in support of furthering their objective.

“This is what Green Dot is about,” O’Connell said. “It’s about students; It’s about members of the community taking an active role. Taking the active role to make our community safer.”

According to O’Connell, there are two versions of the training. One is a 90-minute overview of general information and the goals of Green Dot, and the other is an all day workshop that seeks to not only educate participants, but put their skills to the test.

The girls all experienced the brief overview when a Green Dot trainer was invited to Ponder’s class. While they wish that all Kent students were able to have this experience, they believe that educating freshman is the best place to start when spreading awareness.

“I personally find it essential that they know about (sexual assault) ‘cause they will come across it, whether hopefully it’s not first-hand, but they’ll know someone that’s experienced it,” Garlinger said. “I think it’s essential that freshmen come in with (training) because they’re at such a moldable state where they’re leaving their homes, and they’re finding their new friends and connections, and they’re finding things that drive them. And that’s so so great, but it’s also essential that we make it a safe environment for them to do so in.”

As a former residential assistant, Kashi has had first-hand experience with the benefits of Green Dot. While participating in training to be a resident assistant, she participated in the all-day Green Dot workshop. Because of this, when students would come to her and share their experiences, she was able to find the right resources to help them.

“I want everyone to have that support and know that help is out there, and have knowledge and education, and know how to be a better bystander,” Kashi said.

Mckenzie Jean-Philippe is the diversity editor, contact her at [email protected]