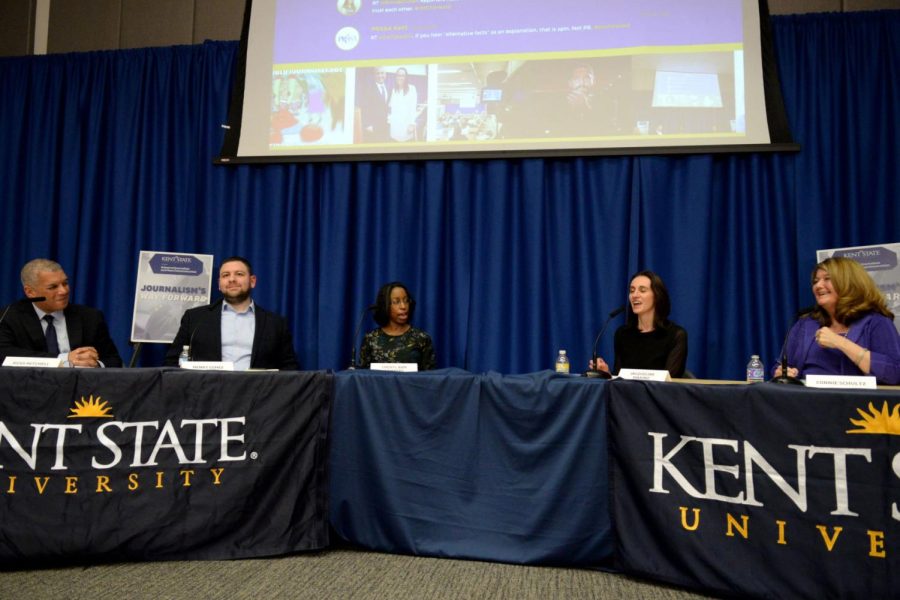 Russ Mitchell, of WKYC, moderates a panel discussion of media professionals at JMC’s Way Forward to discuss the current state of journalism in post 2016 election America on Thursday, Jan. 26, 2017. The panel included Henry Gomez, Cheryl Ann Lambert, Jacqueline Marino, Connie Schultz and Chance York. Participants live tweeted and asked questions about what is to come for the media profession.

It was a full house Thursday night at the Journalism’s Way Forward event, hosted by Kent State’s School of Journalism and Mass Communication, which encouraged an open dialogue about the future of media for students and professionals.

Moderated by Russ Mitchell, an award winning journalist at Cleveland’s WKYC Channel 3, the event touched on topics relating to media literacy, truth and credibility in journalism and how the public perceives the media after the 2016 election of President Donald Trump.

The diverse group of panelists used their knowledge in journalism, politics, research and public relations to give multiple perspectives on these issues.

A point brought up repeatedly was the idea of transparency and upholding truth in the media.

“We (journalists) need to stand out more,” Marino said. “Look at what your values are as a journalist and stay true to those values.”

Ethics was another topic of concern, an issue students find pressing to the media today. Trump and his administration’s ethics were discussed among the panel.

“Honesty and ethics are important, yet Trump thinks his word is God,” sophomore public relations major Lauren Garczynski said. “He thinks it’s his way or the highway.”

Senior paralegal studies major Anthony Erhardt said the most important issue to him is Trump’s disregard for facts.

“If we (the media) continue to let Trump spew falsehoods, it will feed into the misinformed public,” Erhardt said.

Many questions from the audience expressed worry about the integrity of the media during the coming years in the Trump administration, something all panelists discussed passionately throughout the night.

Schultz touched on “wrestling with lies and truths” in this era of journalism. “We (journalists) owe it to the public,” she said, in regards to reporting on the lies being told to the American people.

“We haven’t declared war,” Schultz said. “We are doing our job.”

Trending in the media is the idea of alternative facts and fake news, allegations unprecedented of any presidential administration. These have made professionals wonder how the media can reach citizens that subscribe to that notion.

“A threat is that so many people are in bubbles and are going to sources that appeal to their worldview,” Marino said. “We need to invite people into our journalistic process.”

The panelists mentioned that focusing on the negative won’t work to fix the broken relationship between media and the public.

“It (distrust in media) is perpetuating negative opinions about the industry (public relations),” Lambert said. “It requires us to speak out and do work that is deemed as trustworthy.”

Gomez offered his solution: focus on the communities whose voices weren’t heard this past election cycle, and form substantial relationships to rebuild trust.

“We (journalists) underestimated how people in these communities would turn out and vote,” Gomez said.

Gomez suggested we notice the white working class and examine the massive voter turnout in Appalachia, which he said will help the media and politicians understand the viewpoints of the voiceless.

York said he believes education is at the forefront of fixing the acceptance of lies that has become common this election cycle. “(Media) literacy should be taught young,” he said, along with the idea of parents cultivating political discussion with their children at home.

“It’s important young children are taught media literacy at an early age in school,” Parker said. “When students are taught to develop good habits, they then grow up to become more informed citizens on the issues that affect them.”

York reminded the audience that “Trump will shape an entire generation,” just like former President George H. W. Bush did for him.

Panelists further discussed the future of media and extended advice to young students on better journalism for the future. Words of wisdom from finding a journalistic hero to going outside of your comfort zone served as their closing remarks.

“Act brave and the courage will come,” Schultz said.

Molly Spillman is the CCI reporter, contact her at [email protected]