Opinion: The glass ceiling has been cracked 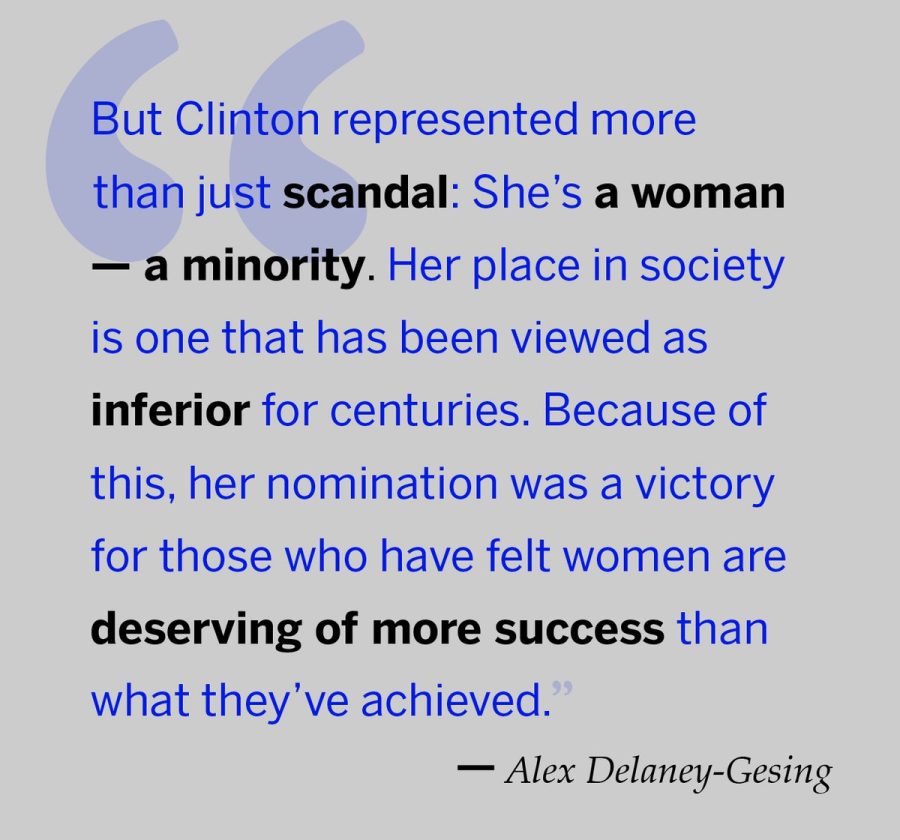 Today marks the beginning of a new month. November, a period that saw the rise and fall of two vastly different political and social movements throughout the United States, has finally come to end.

And so, it would seem, has the chance for the glass ceiling to break.

Former Secretary of State Hillary Clinton achieved what no other woman has; securing a nomination as a major political party’s presidential candidate. She was the epitome of what the 21st century should be about: shattering the glass ceiling.

Clinton, however, had her faults.

The now-famous email scandal involving the use of her private work server for personal matters while secretary of state dubbed her “Crooked Hillary.” It plagued her campaign and was one of the leading reasons voters referenced as to why they felt they couldn’t support her.

But Clinton represented more than just scandal: She’s a woman — a minority, as the world we live in views her gender. And the irony of that notion is, in fact, that women account for just under half the world population and slightly more than half the U.S. population. How, I have to ask, does that equate to the female sex being considered a minority?

Clinton’s place in society is one that has been viewed as inferior for centuries. And it’s because of this that her nomination was a victory for those who have felt women are deserving of more success than what they’ve achieved.

Her nomination was a history-making event that none of the 14 women since 1872 who ran before her accomplished — earning enough delegates to secure a major party nomination.

In the general election, more than half of this country voted for Clinton, who won the popular vote by a considerable margin of millions. Granted, that didn’t earn her the presidency. But out-gaining now-President-elect Donald Trump should mean something.

Personally, I’ve always been a strong believer in advocating for women’s rights. Gender equality is a topic at the forefront of the majority of issues in today’s society that’s in need of advancement. I don’t think it should be up for debate as to whether or not men and women should be on the same playing field, so to speak.

It should simply be a given. Something accepted and understood.

For a country that’s supposed to be a leader in the world, it seems as though we’re late to the bandwagon of gender equality. Out of 142 nations in the last 50 years leading up to 2014, 63 countries have had women as either the head of government or state, the World Economics Forum reported. Shouldn’t that be a sign to the citizens of this country that perhaps we should follow suit?

Our president is often referred to as the “leader of the free world.” Shouldn’t that freedom extend to gender as well? It seems too obvious of a concept. Or maybe that’s because — as a young woman and self-proclaimed feminist — I’m biased.

Clinton’s success in securing the Democratic presidential nomination cracked the glass ceiling. It didn’t break it. That, unfortunately, has yet to happen.

Until women are given equal opportunity to govern at the level of men, the progressive future of the United States will hang in the balance.

Alex Delaney-Gesing is the copy desk chief for The Kent Stater, contact her at [email protected]