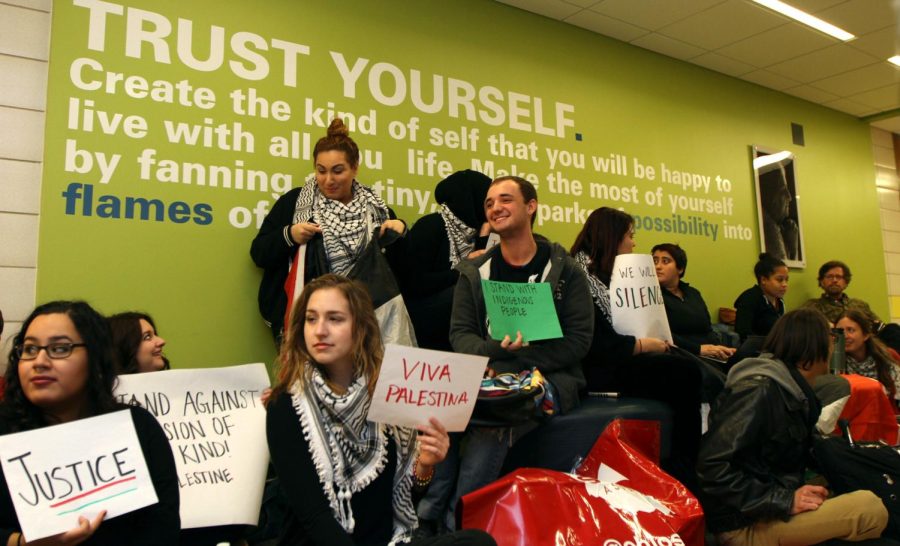 Students from Kent State's Students for Justice in Palestine participate in a sit in protesting the presence of a quote from former Israeli President Golda Meir in Bowman Hall on Thursday, Dec. 8, 2016.

A quote and portrait pertaining to Israel’s former Prime Minister Golda Meir, located in Kent State’s Bowman Hall, was surrounded by students in protest of the matter on Thursday.

Norah Meidan, vice president of Students for Justice in Palestine and a member of Kent State’s Muslim Students Association, said she was there to protest the quote as she, among others, believe the quote is not a positive representation of the school.
Meir’s background, beliefs and history as a prime minister have been moreso the points of contention than the quote itself.
“A lot of Palestinians take offense to this quote the same way a lot of Jews take offense to a quote by Hitler” said Raj Manan, a senior political science major.
The demonstrators cited Meir’s alleged ethnic cleansing of Palestinians from Israel and also her policies that barred African Americans and Jewish individuals from entering Israel — contrary to a long standing policy allowing anyone who is Jewish into Israel regardless of race.

They proclaimed their dissatisfaction with the quote and the university’s response to previous requests to remove it — and removing all of the hall-mounted quotes in Bowman.
Amanda Michalak, a senior political science major and member of SALSA, said she strongly believes in the rights of Palestinian people. When the quote and the individual who said it was brought to Michalak’s attention, she said something needed to be done.
“The university hasn’t said anything about it. They’ve kind of given us a cop-out by saying, ‘Well all the quotes are coming down,’ but that’s not good enough,” Michalak said. “That’s not acknowledging our request.”
Zach Mandel, a senior communication studies major, arrived toward the end of the sit in with a Jerusalem flag and participated in a small counter protest. Mandel and a group of four other men stood roughly 30 feet away and held the flag.
Mandel believes the media exaggerates the conflict and issue, and that Meir was not racist, but she did what was best for her country.
“They believe in a lie,” Mandel said.
The quote has been the center of a maelstrom of recent controversy, with outcry directed toward the university’s failure to involve the student organizations in support of the removal in the subsequent decision making process.
Provost and Senior Vice President of Academic Affairs Todd Diacon said in a statement when the issue was first brought to his attention in November, that when Bowman Hall is renovated in summer 2017, the quote will be painted over.
Manan said he wants to see something happen sooner.
“There are a lot of students here who are not going to graduate in 2017,” he said.  “And they are going to have to walk past this quote every day.”
Michalak did not like the idea either.
“They (the university) made the decision to take all of the quotes down, and I feel like by taking all of them down, you’re sanitizing diversity and that’s not what Kent State’s about,” Michalak said.
Yousof Mousa, president of SJP, said he wishes for the removal of the quote and for it to be replaced by a quote from Rabbi Abraham Joshua Heschel, an anti-war Rabbi.
Mousa believes a quote from Heschel would represent the university in a more positive light and “uphold the university’s core principles of diversity, equity and inclusion.”
Cameron Gorman is a diversity reporter for the Kent Stater, contact her at [email protected]
Austin Mariasy is a photographer for the Kent Stater, contact him at [email protected]
Delete Image
Align Left
Align Center
Align Right
Align Left
Align Center
Delete Heading