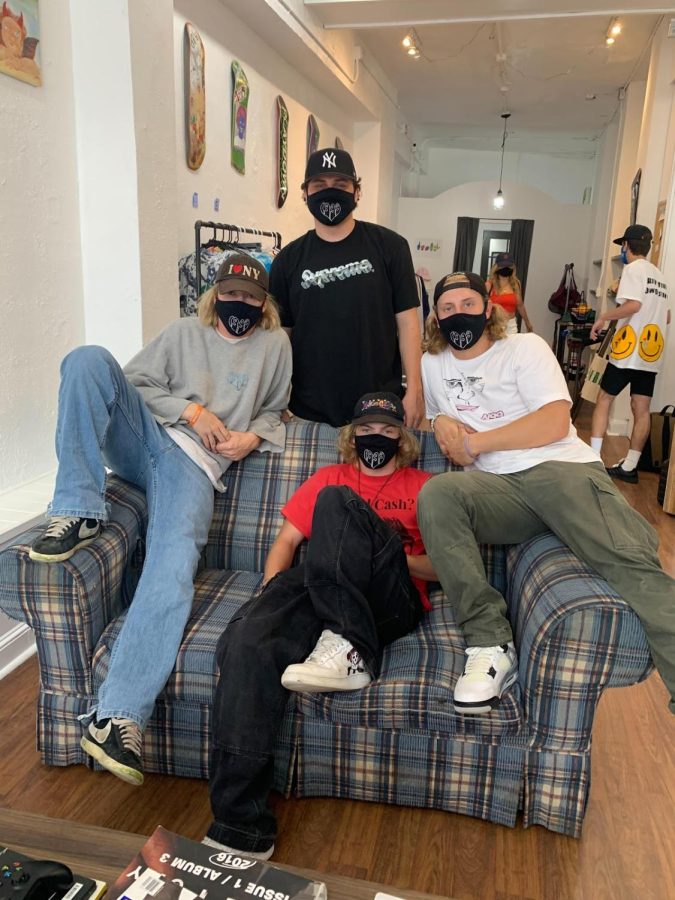 As best friends with a shared passion for clothing, Seamus O’Malley, Ty Kelley and John Baker used to design garments with spray paint and stencils in Baker’s mother’s garage. After experimenting with different designs, they created their own clothing brand called nineteen99 in May 2019. Over almost two years, nineteen99 has sold over 400 items online and 200 items in person, O’Malley said.

O’Malley, nineteen99’s owner, is currently a sophomore fashion merchandising major at Kent State, and named the brand after the year he and Kelley were born. O’Malley said he has always been interested in fashion and loves creating his own clothing.

“Making our own type of stuff and being able to have that creative freedom just to do what we want, that’s the best part about it,” O’Malley said. “We do this for fun, so if we make stuff and have a good time making it and nobody buys it, it doesn’t matter because we had a good time doing it.”

The three owners grew up skateboarding together and O’Malley said his style takes a lot of inspiration from skate culture. This style typically includes graphic T-shirts, hoodies, beanies and Vans, a classic staple in the skateboarding community, according to The Trend Spotter.

Nineteen99’s aesthetic mirrors styles from skate culture because the brand offers graphic T-shirts, beanies and sweatshirts all donning its logo.

Kelley, a senior marketing major at Ohio University and co-owner of nineteen99, said the brand is a “collaborative effort” among the three owners. Specifically, Kelley handles finances, inventory and social media posts.

“We all just know what’s cool,” Kelley said. “We all understand our own sense of style, so we went into clothing because we all … weren’t dressing like how our friends were dressing. We all kind of had that niche for clothing.”

For Valentine’s Day, nineteen99 released matching sweatshirts and sweatpants with its logo and Cupids embroidered on them. These are currently out of stock, but a restock and additional colors will be coming soon, according to nineteen99’s Instagram page.

Kelley said Mickey O’Malley, O’Malley’s younger brother, designs a lot of artwork for nineteen99. Kelley came up with the idea for the Cupid design and sent it to Mickey, who “really made it come to life,” Kelley said.

Mickey, a senior at Padua Franciscan High School, said he has always been interested in art. His favorite design is his tribute to Kobe Bryant, seen in this nineteen99 Instagram post.

“It makes me happy to see my stuff is going to be out there, worn, for even more people to see,” Mickey said.

Baker, an alumni of the University of Cincinnati and co-owner of nineteen99, maintains the brand’s website, takes product shots and oversees online inventory. Baker said he previously worked at PacSun and customized clothes he bought there because he could not find clothes he wanted.

“I would have something in my head that I would want to be able to buy, like an outfit, but then not be able to actually find that thing to buy in a store or even looking through all the thrift clothes,” Baker said.

With nineteen99, Baker’s creativity can run wild which allows him to produce clothing he actually wants to wear.

Kelley repurposed a pair of Barragan’s old American Eagle jeans by sewing black lace on the back pocket and painting white flames and the nineteen99 logo on them. Barragan said she wears these revamped jeans all the time and always gets compliments on them.

“In terms of shopping and choosing where to spend your money, supporting businesses that literally are just doing it out of their love for fashion, why would I not want to give my money to someone who loves fashion just as much as I do?” Barragan said. “That just makes perfect sense to me.”

Social media functions as one of nineteen99’s main strengths, said Lily DeGraw, a junior retail and fashion merchandising major at Ohio University. DeGraw modeled for nineteen99 and edited some of the brand’s social media posts.

After a product photoshoot, DeGraw said she edited some of the pictures based on inspiration from a Pinterest board with “trippy” edits.

At Ohio University, DeGraw said nineteen99 is popular among some students. She said the brand received recognition for its clothing on campus because the clothes have consistently sold out and students often wear the clothes around campus.

“It’s kind of just the dopest thing you can buy from anyone on campus if you want to support a small business,” DeGraw said.

“I see a lot of people wearing his brand because there’s a few of my friends who also have clothing brands on campus, but I feel like Ty [Kelley]’s is one of the most popular that people know about,” Spears said.

O’Malley recently transferred to Kent State and said he hopes nineteen99 will gain popularity on campus. With an established nineteen99 community in Athens, the three owners said they hope to grow in Kent as well.

Incorporating activism into nineteen99 is important to the three owners, Kelley said. The clothing brand released a “Girls Run the World” logo as one of their first products, and it is their bestseller. For Women’s History Month, nineteen99 is donating 20% of the profits from its Girls Run the World clothing and accessories to the Cleveland Rape Crisis Center, according to their Instagram.

Kelley said nineteen99 allows all three owners to raise awareness for issues they stand behind, such as women’s rights, racial equality and LGBTQ rights.

For the future, nineteen99 hopes to do more pop-up shops and in-person sales, as well as restock merchandise and create more clothing, O’Malley said. The owners also want to get the brand’s clothing in stores or skate shops and continue improving the clothing’s quality.

“We grew up knowing a lot of people and just to see all these people from where we’re from show support is really cool,” O’Malley said. “Personally, that means more than anyone with internet fame or whatever because we really want to build a community.”

Catie Pusateri is a reporter. Contact her at [email protected]