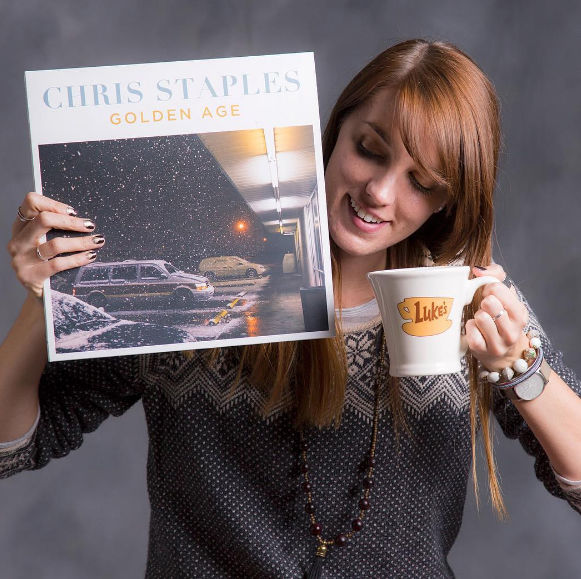 Any “Gilmore Girls” fan can recognize that quote from the hit TV series. Lorelai and Rory sit on the couch, pizza in hand, and explain to Rory’s boyfriend Dean the importance of “The Donna Reed Show.” For many fans, that quote sums up their feelings about “Gilmore Girls” as well.

For Melissa Olson, a senior graphic designer and adjunct professor at Kent State, the show and reboot have taken a prominent role in her life.

“I’ve watched it from the beginning,” Olson said. “I was 14 when the show first premiered, and my mom and I always watched it together.”

Olson’s love for the show continued into her college years, and her mom would visit her on campus to watch.

“We watched more of the show together than we did apart,” she said.

Once news of a reboot started to circulate, Olson began to realize she had a knack for all things “Gilmore Girls,” especially the soundtrack of the show. Olson said she has always loved music, and paid particular attention to the songs featured on the show, so the hype of the reboot created the perfect timing for her podcast, “Gilmore Girls Soundtrack,” to take off.

“I started publishing the podcast in May 2016, but I began research for it a few months prior to that,” she said. “I wasn’t sure it would be a podcast at first. I was going to just do a blog, but podcasting seemed to be a better fit.”

Her research includes having watched the whole show — all seven seasons — countless times through, but particularly seasons three through five. She has binders of the scripts to make her notes on, paying attention to what songs play at what plot points, and how those relate to the character featured in that moment.

“When I research an episode, I almost always find that Amy Sherman-Palladino (the show’s creator) is much more clever with her musical choices and cross-references than I ever thought,” Olson said. “She, and the team she assembled for the original run of the show, are a bunch of geniuses.”

Olson’s favorite character should come as no surprise.

Lane’s character is a rebellious teen who hides her CDs under floorboards in her bedroom so that her strict mother doesn’t find them. She also ends up as a drummer in a band.

“She is such a huge part of Rory’s character development and does her best to be there for her friend without dictating her decisions,” Olson said. “Plus, she’s got 99 percent amazing music taste.”

Olson said the other 1 percent is missing because of an Eminem reference in the show’s pilot episode.

Olson incorporates show notes on the podcast website, which still acts as a sort of blog. The blog ranges from music to “Gilmore Girls” reboot news.

The podcast and blog has followers from around the world — Finland, Italy, Japan and Thailand to name a few — and is available on iTunes and Google Play.

Now that the new episodes have been released, Olson has more work cut out for her. For the first few podcast episodes, she spent about seven hours researching, writing, recording and editing. Now, the process takes about four hours if it’s an episode she really loves.

Olson hosted a trivia night in October for fans of her podcast and the television show, and even got prizes donated and sponsored by Red Vines, a “Gilmore Girls” staple.

For something that started as a way to bond with her mom, Olson has truly turned “Gilmore Girls” into a lifestyle.

Lauren Rathmell is a features correspondent, contact her at [email protected]