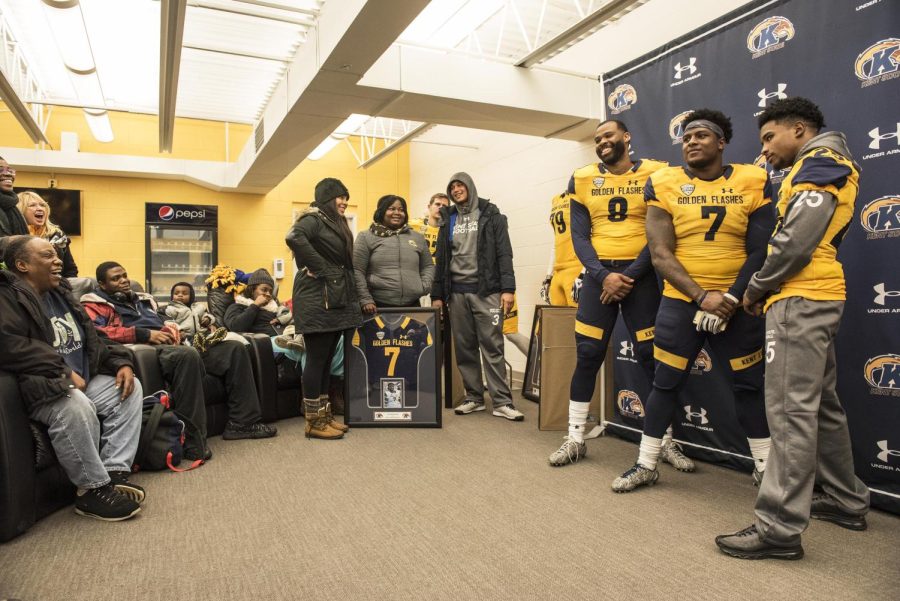 Nick Cuthbert has a lot to be proud of when he looks back at his career as a Kent State football player. In 2014 — his first season with the program after transferring from Georgia Institute of Technology — he earned the Mid-American Conference’s Distinguished Scholar Athlete award.

The following year he earned a spot on the CoSIDA Academic All-America Second Team. And in his senior season he transitioned from safety to linebacker and became the first Kent State player since 2007 to make 19 tackles in a game.

Even though the football team didn’t have much on-field success during his tenure at Kent State — winning eight of 27 games — he wouldn’t trade his experience as a Flash for anything.

“I got nothing to look back on. I had a good run, did everything I could. I’m happy with what happened and wouldn’t change a thing,” Cuthbert said. “No matter the record, we were still a family, brothers. And we have bonds that are going to last a lot longer than the season.”

Cuthbert was one of 16 Kent State seniors honored prior to the final home game of the 2016 season Friday afternoon at Dix Stadium.

“(We) didn’t finish it the way that we wanted to with them, but love (the seniors’) fight, love their grit,” head coach Paul Haynes said following the game. “Love the things that they meant to this program and also this university. We’ll get back to work and we’ll get better. But again, (I’m) proud of these guys for what they did for this program and this university.”

Haynes has only won 12 games in his four seasons as head coach, but said he’s not worried about what the public thinks of him as a head coach. Rather, he said his main concern is where the program is headed.

“All I can do is go grind it out, day-to-day, and make these kids better young men. That’s what the program is about. And if you don’t think that I’m doing that, then I shouldn’t be the head coach,” he said. “Anybody who thinks that Kent State football is not a long process is crazy. It’s been 94 years and 26 winning seasons. It’s not going to happen overnight. It’s a process.”

Fifth-year senior Charles Chandler has seen the football program at its highest and lowest point when he was a part of the Kent State team that went 11-2 and had a chance to play in GoDaddy.com Bowl during the 2012-2013 season.

Chandler feels that through all the up and downs in the past five seasons, he’s proud to have played at Kent State.

“We may not have it all together but together we have it all,  Chandler said. “By that I mean we may not have went undefeated or went to multiple bowl games or won the MAC championship, but we had each other. I wouldn’t want to have played with anyone else. I am a part of a brotherhood and no one can take that away from me.”

“Kent state gave me an opportunity that no other Division I program would so, for that I am forever grateful and will always be a Golden Flash.”