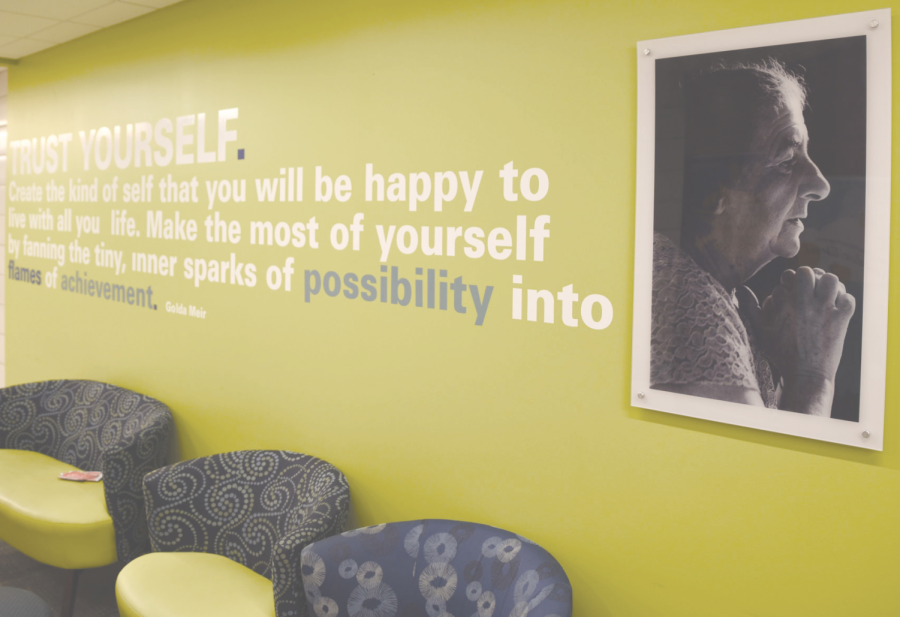 Kent State’s administration has responded to the unease expressed from student organizations about a wall display featuring a quote by Golda Meir, the former prime minister of Israel, in Bowman Hall.

The concerned organizations include the Spanish and Latino Student Association, Students for Justice in Palestine and the Muslim Students Association. This matter was first brought to attention through a Nov. 1 opinion article submitted to KentWired.

The quote reads: “Trust yourself. Create the kind of self that you will be happy to live with all your life. Make the most of yourself by fanning the tiny, inner sparks of possibility into flames of achievement.”

However, students say it’s not the quote in itself that has them concerned.

Yousof Mousa, president of SJP, said it’s more because of who Meir is.

“It’s from a person connected to the death of many Palestinians,” Mousa said, “That’s where the problem is.”

Rachel Mason, the president of SALSA, said they stand in solidarity with SJP, as SJP had shown support for SALSA in the past.

“The attitude of not being complacent with oppression in any capacity is something that SALSA as an organization stands for,” Mason said.

Boman Hall Quote Upsets Some Students from KentWired.com on Vimeo.

Mousa, after contacting administration, has heard back in a letter from Warren.

“Thank you for expressing your concerns about the negativity in the national environment and your support for Kent State to continue to be a diverse community that is committed to inclusive excellence,” the letter read. “I share those sentiments and am dedicated to our campus being one that is welcoming to all while also honoring the rights of free speech and freedom of expression that are central to a democratic society.”

Warren notified him in the note that she and Provost and Senior Vice President of Academic Affairs Todd Diacon had visited Bowman Hall to view the quotes and decide about the course of action.

“I feel that is absolutely pertinent that the university takes action,” Mason said.

Mousa himself was raised in Palestine.

“When I first saw it (in Bowman Hall), I was like ‘wow, I might change the school,’ Mousa said.

The various student groups mentioned in the opinion article stated that they would like to request for the picture of Meir and the quote to be removed, and that the university replace it with something more inclusive.

Meir can be seen as a controversial figure, despite the fact that she was the first and only woman prime minister of Israel.

“The basic point that the students … are evoking is the idea that when you walk past that quote, for them, this is a person who, in 1969 said on the record to a British journalist that there are no such thing as the Palestinian people,” said Joshua Stacher, an associate professor of political science and faculty advisor of SJP. “‘We could say that we came here and threw them off their land. But they never existed in the first place, so we couldn’t.”

Meir was in office from 1969 to 1974, although her political career stretched through nearly her entire adult life, including through the 1948 Palestinian exodus. Although there are no solid ties to anchor her to these acts, those opposed to her veneration argue that she allowed them.

Mousa said he first noticed the quote last year, but Lama Abu-Amara, president of MSA, said that action was not taken — at first.

“We kind of just talked about it amongst ourselves, and some professors actually pointed out to us that the quote was up there and something had to be done about it,” Abu-Amara said. “Nobody actually took that step to talk to the university about it until now.”

Those who wrote the opinion piece understood that their point of view on the matter may be controversial.

“A lot of people like to say that she was a great leader, and … in history it was kind of documented that during her time, there were a lot of injustices that were committed like demolition of homes, segregation of schools for Jewish and non-Jewish students … and she supported that. That’s a thing. She did support that, and as Muslims … we don’t support this kind of injustice. We don’t tolerate it,” Abu-Amara said. “So to have her picture up there with a quote next to it … it’s kind of offensive.”

The groups suggested that the quote could be replaced with a different quote by another Jewish or Israeli leader.

Stacher said he can’t imagine that students who are ideologically or emotionally attached to the state of Israel would agree and accept this idea.

He added that he hopes Kent State President Beverly Warren would understand that “(Kent State) is a home, (and they) would no longer want Golda Meir up on that wall because of her participation in those policies.”

Mason recognized that the university’s mission is said to focus on diversity and inclusiveness.

“If that is the stance that the university is taking, then they must respond in line with those values,” Mason said. “They must listen to the issues brought up by students who constitute this diverse population and take the necessary steps to improve the university as a whole.”

Cameron Gorman is a diversity reporter, contact her at [email protected]