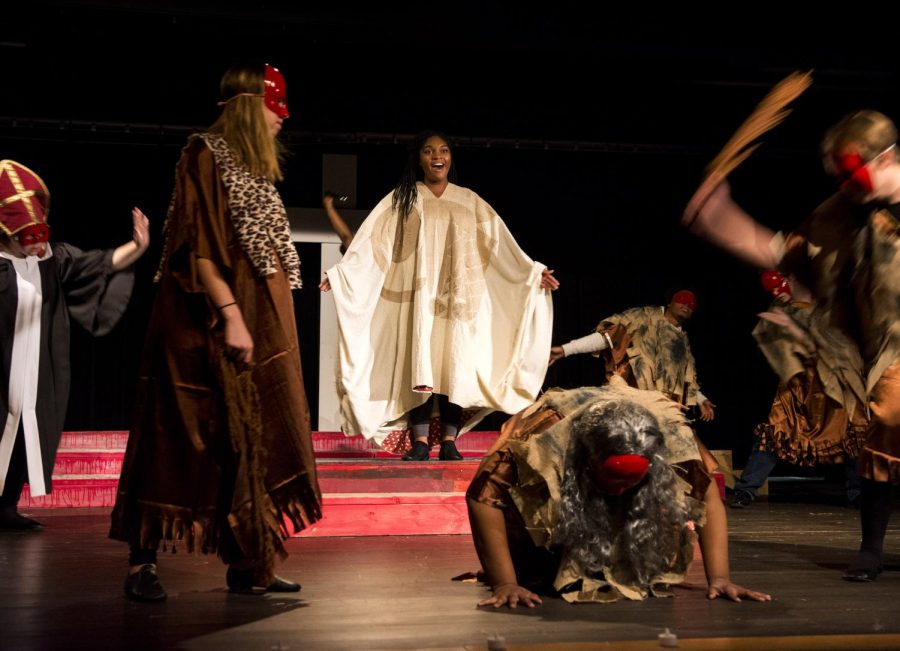 Kent State students practice their performance on stage for “The Bacchae of Euripides” final dress rehearsal on Wednesday, Nov. 16, 2016.

By mixing Greek and African tales, the Pan-African Theatre Ensemble will make its premiere at Kent State through “The Bacchae of Euripides: A Communion Rite” by Nigerian playwright Wole Soyinka.

Aistrope plays Agave — a slave —Baccante and a priest in the show.

“A Communion Rite” tells the tale of Dionysus, the Greek god of wine, theatre and chaos, imagined as a part of the Yoruba pantheon. Dionysus is imagined as Ogun’s — the Yoruba God of iron and war — younger sibling. Channy Lewis, a sophomore theatre studies major, plays the role of Dionysus.

“It’s a very different character for me,” Lewis said. “It’s given me a good opportunity to grow a lot and learn about who I can become. It’s really fun — it’s really different from what you would normally see in the theatre. It’s just really extreme. And so I really like that and I think that it will tell a really good story.”

“We knew we wanted a body of work from the Pan-African world — and by Pan-African world we mean people who have been affected by trans-atlantic slavery,” said Amy-Rose Forbes-Erickson, assistant professor of Pan-African studies and director of “A Communion Rite.” “We’re talking about people of African descent … do it’s an important piece particularly right across the border with theatre history, but also for this particular playwright, using the play to create particular statements about trans-atlantic slavery and about just people who are dispossessed.”

The story handles different themes as a means to make a statement about those who have been cast aside or those who had to endure trans-atlantic slavery.

“The most challenging part for me, in this, is to grab the text by the horns,” said musical director Darryl Lewis. “Because this is not–it’s not Disney World. It’s got a story in it like some of the Disney World stories would have but this is difficult language…it’s more like Shakespeare. So it’s meaty, it’s hearty, it’s passionate. So I think the most difficult part for me is to deliver it in a way that is understandable to the audience–the message, the intent, the action.”

While it is a theatrical production with dance, music and poetry, it is meant to appeal to any and all audiences.

“It crosses so many departments,” Forbes-Erickson said. “Not just theatre, but the classics, philosophy, history, English and so many students in those areas and really in the humanities would appreciate this production.”

“The Bacchae of Euripides: A Communion Rite” makes it debut on Thursday and will run through until Sunday, where it will close with a matinee performance. Tickets can be purchased in room 127 of Oscar Ritchie Hal or at the door.

Kellie Nock is an arts reporter, contact her at [email protected]