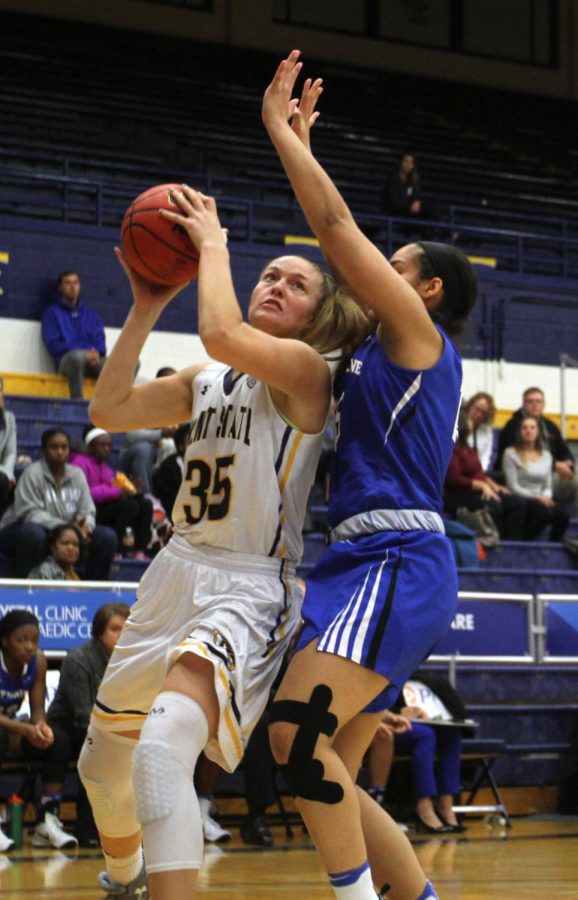 Junior forward Jordan Korinek drives to the basket during a game on Wednesday, Nov. 30, 2016, in the M.A.C. Center.

Kent State senior Larissa Lurken of the women’s basketball team continued her hot start to the season, as the senior guard scored 25 points to help lead the Flashes (4-4) over Indiana University – Purdue University Fort Wayne (1-6) by a score of 66-55.

“I was really pleased with the way we started,” Kent State head coach Todd Starkey said after the game. “Then we … took our foot off the gas a little bit. We kind of got away from our game plan, and … (Fort Wayne) started to get a little bit of success.

Starkey said that once the team got a taste of success, the players got a little hope.

“I think (us playing) five games in nine days kind of caught up with us in the second half,” he said. “Mentally we weren’t as sharp and we … struggled through the second half, especially offensively.”

Lurken — who broke numerous records in the Florida Gulf Coast Showcase showcase last weekend — finished the game eight of 15 from the field and seven of 11 from the free-throw line.

“That wasn’t in the game place,” Lurken said of her offensive output. “I try to be aggressive from the start, so getting off to a hot start will help me throughout the game. And not just (for) me, but my teammates as well.”

It wasn’t all roses offensively for the Flashes, though, as they only managed to shoot 50 percent from the line and lost the turnover battle 17-12. The Flashes were also outscored 49-32 in the last three quarters.

“It’s good that we got out to a big enough lead,” Starkey said. “What that tells me is that we need to continue to progress and make sure that we’re not practicing bad habits, no matter what the score is on the court.”

Despite this, Lurken emphasized that this season feels different from seasons past.

“It just shows us that our system is really working this year with everyone returning plus one addition,” Lurken said of the early season success. “It’s crazy how different of a team we are … We still have a a lot of work to do obviously but it’s really important for our team to start out .500 at the beginning of the year, especially before conference play starts.”

Henry Palattella is a sports reporter, contact him at [email protected]