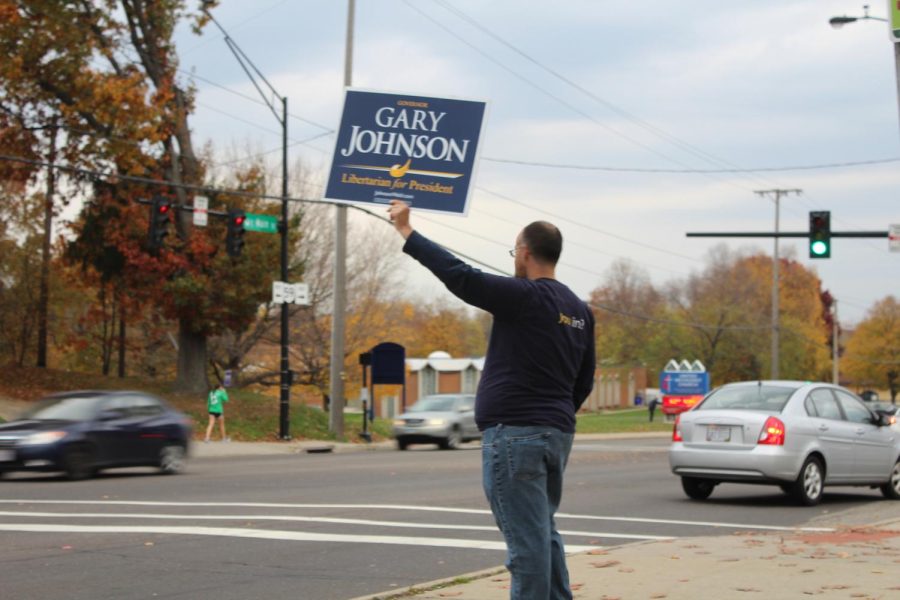 John Jancsurak holds up a Gary Johnson sign outside of the United Church of Christ on Tuesday, Nov. 8, 2016.

Kent State students voted to make their voices heard in an election between some of the most controversial candidates in United States history.

Outside of Kent State’s Student Recreation and Wellness Center, Ohio Together volunteers called out to students with megaphones and reached out to students with pamphlets, rallying democratic support and directing voters to proper locations.
Hana Barkowitz, president of Kent State’s chapter of the College Democrats, said she voted early, “I cried, it felt incredible!”
Another volunteer Sam Doerle, a junior integrated life sciences major, said he voted early as well.
“I voted for Hillary,” he said. “I would prefer to have a more liberal Supreme Court, and I’m planning to join the army. I prefer my boss to be someone who didn’t work for a reality T.V. show where he just fired people for a living.”
Senior fashion merchandising major Quierston Byers said she also voted early.
“How do I feel about voting for the first female president of all time? I feel amazing!” she said.
Byers shared some of her fears about the election.
“My biggest fear is that Donald Trump becomes president because he represents all the things in America that scare me, like intolerance and hate and bigotry,” she said. “We came a long way since then, so I feel like even if Hillary Clinton wasn’t to change everything that I need changed — (Trump) is going to take us backwards.”
Some voters, like sophomore psychology major Hunter DiBell, decided to take this election more seriously.
“Right now, I’m leaning towards Hillary Clinton, but I was thinking about writing in Harambe as a joke, but I decided I probably shouldn’t, especially considering how close these two are right now,” he said.
Other students expressed their support for the Republican candidate.
Sisters Janna and Jara Chadwell, sophomore American Sign Language and nursing majors, respectively, said they were voting for Trump.
“I’ve actually read his education plan and I support his ideas,” Janna said. “I took an education and democratic society class last year and everything that I learned their supported his plan so that’s why I voted for him, not because I agree with him morally, but because I think he will be a good president.”
One student said she voted for Trump because she didn’t morally agree with Clinton, like freshman early childhood education major Teresa Maki, who called the election a joke.

“Hillary is really corrupt,” she said. “She’s not really for gay rights. She lies about everything that comes up. There’s always something contradicting her.”

Other Trump supporters cited his campaign slogan for their reason.

“I feel like we really got screwed over in this election,” she said. “ I voted for Hillary because I do not believe Trump is for for presidency and third-party would be a, quote, wasted vote.”

“Frankly, the two parties have failed us. We need to step out of the rhetoric,” he said.

“I used to think that voting was not important, I wasn’t planning on voting but the more the I thought about it, the more important it seemed to me,” said Digital Media production major Mark Fleming.

Others criticized the voting process in general, like  freshman exploratory major Matthew Rokicki.

“I feel like it should be the popular vote, the people’s vote,” he said.