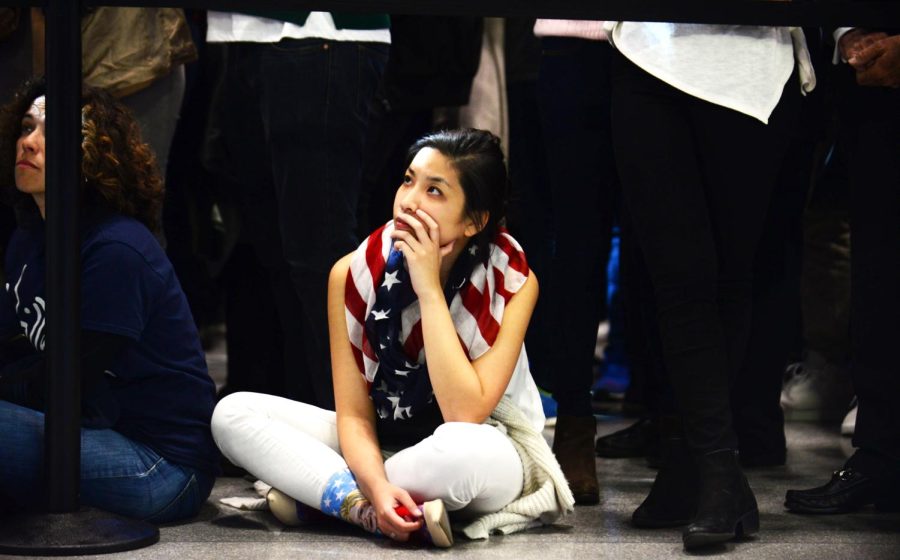 As CNN announced Trump in favor of winning the presidency, Clinton supporters inside the Jacob K. Javits Center in Manhattan — where the Clinton campaign was holding their candidate’s venue that night — couldn’t help but let the tears trail down their cheeks and put their heads in their hands in disbelief.

Clinton supporters stood in line outside the Javits as early as 11 a.m. Tuesday, bearing Clinton’s face on their shirts and phrases like “Shattering the Glass Ceiling” and “Madam President” on their backs.

While people talked amongst themselves and neighbors in line, others decided to take a nap to pass the time with “I Heart NY” hats covering their faces from the warm November sun beaming down on them.

New York was bustling with traffic as the New York City Police Department shut down all streets within two blocks of the Javits, while Clinton supporters lined the sidewalks.

Mark G., an artist based in Philadelphia, displayed 5-foot canvases of hand-drawn portraits of Clinton, President Barack Obama and first lady Michelle Obama. Signatures from hundreds of bystanders layered on top of the drawings, showing support for Clinton.

“I don’t come here just to show support,” Mark said. “I want to influence people. This is my job … no. This is my life.”Gretchen Baer, an artist from Arizona who travels state-to-state to show support for Clinton, went up and down the line of people, keeping the crowd excited as they waited to get inside, while dressed in a white pant suit — but not just any white pant suit.Baer decorated the suit in sequins and glitter, spray painted “Hillary” on the sleeves of the blazer and Clinton’s face on her pants, and completed the ensemble with a bright green hat and sunglasses with Clinton’s campaign logo on the lenses.

“It’s not about ‘the first woman president,’” Baer said. “It’s about making a difference. I truly believe we can all make a better America with her as president, which is why I’m here; I want to spread that message.”

When 3 p.m. rolled around, the crowd piled into a neighboring auditorium connected to the Javits. After three hours of a grueling wait, a crowd of over 30,000 was allowed through a long corridor into the center.

Upon entering the first floor, the crowd was greeted with American flags draped over the second floor overlook and television sets broadcasting polling coverage on CNN. People had their eyes glued to the television sets as each state’s polling closed.

On the second floor, Clinton’s stage was prepared with a large backdrop of her campaign logo and an outline of the nation planted in the center of the floor by the podium.

At the beginning of the night, the map of the U.S. displayed on the screens were relatively even with red and blue states in favor of the presidential nominees. But as more results came in, the map started to light up with more red and smaller traces of blue.

An atmosphere that was once cheerful and exuberant had become silent and tearful.

Mothers and fathers hugged their children close. Friends embraced to find comfort once they realized that the presidential candidate they have been supporting wouldn’t reach the White House.

As Trump started to gain a larger lead over Clinton, crowds of people started to slowly make their way toward the exits of the Javits. Conversations ceased. The only sound to be heard in the building were echoes from the televisions bouncing off the walls. The lights began to dim as janitors started to pick up the trash off of floors. Security told individuals,“It’s time to go home. It’s over.”
“I am so disappointed. I expected better of this nation,” said 23-year-old Jamie Welch, a student at Columbia University, before leaving the center. “I just can’t believe this happened … I’m speechless.”
Lydia Taylor is a senior reporter, contact her at [email protected]
Delete Image
Align Left
Align Center
Align Right
Align Left
Align Center
Delete Heading