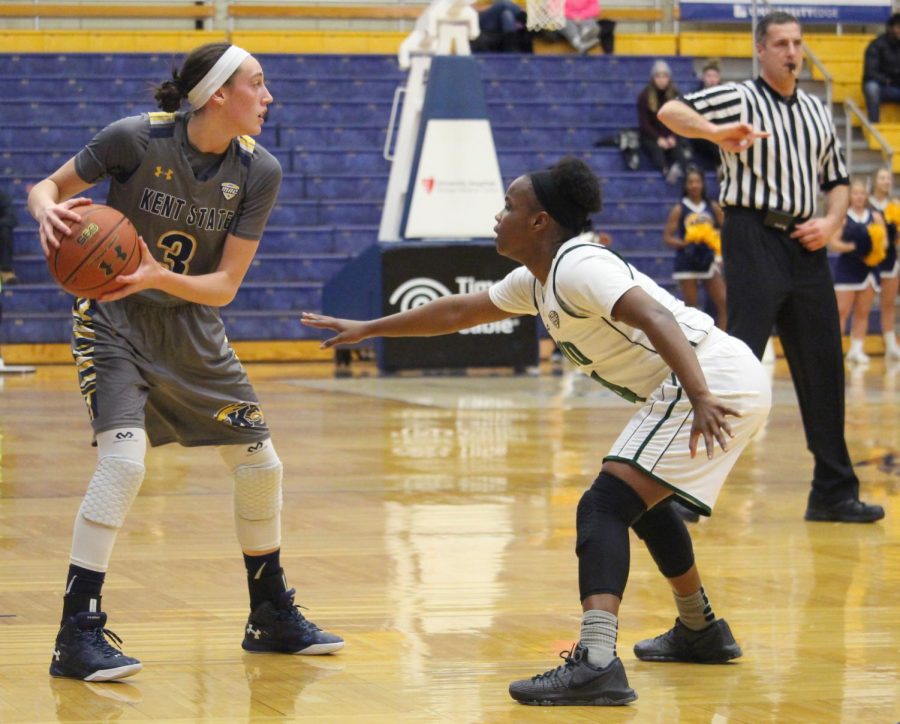 Kent State guard Larissa Lurken looks for an open pass to a teammate in Wednesday's game against Ohio University at the MAC Center. The Flashes lost 54-93. Jan. 20, 2016.

Larissa Lurken put together a dominate performance over the extended Thanksgiving break—26 points per game over three games in the Florida Gulf Coast Showcase—earning her Mid-American Conference East player of the week honors.

Lurken—who was named to the all-tournament team—not only stuffed the stat sheet, but the record books as well. The senior guard recorded her 1,000th career point in the Flashes first game of the tournament, which was a 42-84 loss to No. 5 Baylor University.

Lurken followed that up with 39 points in the Flashes 79-73 loss to Eastern Kentucky University the very next day, which was the highest point total of not only her career, but the highest total for any player in a Gulf Coast showcase game. She went 22-25 from the free-throw line in the Flashes loss to the Lady Toppers, which are both new Kent State records.

Lurken finished the tournament off by recording her third double-double of the season scoring 24 points and grabbing 13 rebounds in the Flashes 77-64 win over Florida Gulf Coast University in their final game of the tournament.

The Flashes return to the court Wednesday night when they take on Fort Wayne at the M.A.C. Center Tip-off is scheduled for 7 p.m.

Henry Palattela is a sports reporter, contact him at [email protected]