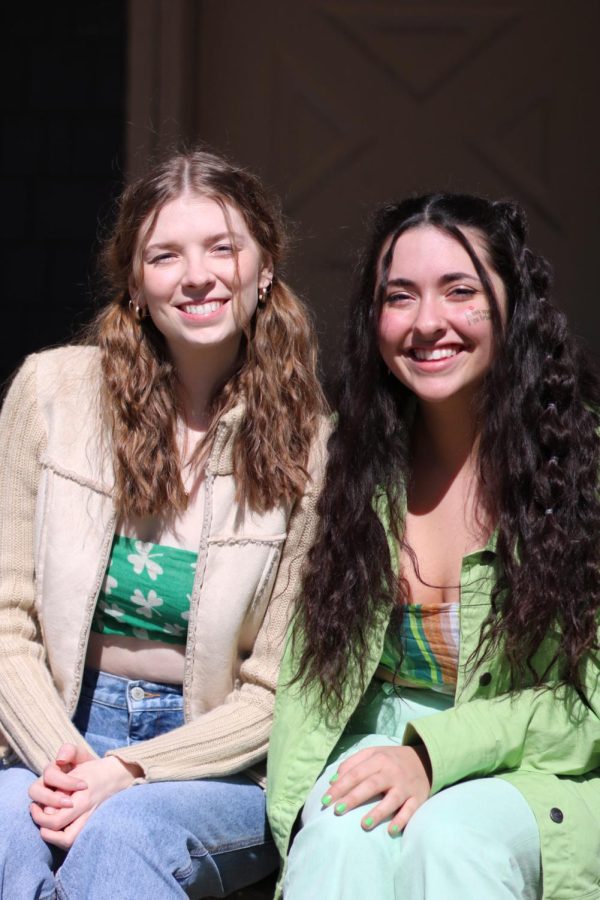 Sophia Fricioni poses with her roommate on their front porch.

A gray house on the street corner of East College Avenue was vibrant with people in St. Patrick’s-themed garb filling the yard, the porch and the neighboring house’s balcony, but the festivities were soon thwarted by police officers flanking the home on both sides.

“I saw about 20 to 30 people in the backyard [while] we were in our backyard having a fire,” Kent State student Sophia Fricioni and a resident at a nearby house said. “We were worried because that was a lot of people!”

Fricioni and her roommate positioned themselves on their own front porch, making sure none of the party-goers wandered into their yard.

Two individuals were removed from the home in handcuffs by police officers, and those who’d managed to avoid arrest shouted “RIP cuzzo!” from their balcony. Officers continued to disperse large groups of people in neighboring households, enforcing the 10 person gathering limit.

Many other house parties died early in the day due to police shutdowns and fines, leading to quieter gatherings on front porches, casual games of beer pong in front yards and more people making their way downtown to check out the bar scene.

“It’s a little different, because normally there are a lot of house parties that you can walk around to, so those are a lot more toned down,” junior Maria Joseph said, “but the bars are still going at a good rate.”

People gathered early in the morning on the front lawns wearing different shades of green as they played games and danced to the music coming from the houses. Laughter and the sound of bottles being thrown and shattered could be heard above the music as people partied, many wearing no masks and disregarding social distancing guidelines.

Some people, like Nicholas Koscinski, a sophomore aeronautics major, said they started partying as early as 8 a.m. at houses they lived at. Many people stated throughout the day that there were “only 10 people” at their individual parties, while others closed their front doors and asked that photos not be taken.

One senior marketing major said she and her friends had been out “pre-gaming” since 10 a.m. and planned to head over to the bars once they opened around noon.

No one could be seen gathering on the front lawns of houses on E. Main Street but muffled music and voices from inside or around the back could be heard at some houses.

In downtown Kent, now peppered with various shades of green on sidewalks, in the street and flowing in from nearby parking lots, bars like Water Street Tavern and Zephyr had new lines forming by the early afternoon hours while others like 157 Lounge, Barflyy and The Loft seemed to never see a slow moment.

Kent State senior and Ireland native Ciara Kearns added she was happy to be out celebrating at all.

“My friends [back home] think it’s funny because none of them can go out, but over here everything’s open, so I’m able to celebrate Fake Paddy’s and they’re not!” she said laughing.

“It’s been a long [wait], I’m not gonna lie,” a Kent State nursing student who declined to be named said while waiting in line at 157 Lounge. “We’ve been at the front the whole time, but [the bar] was already filled before it even opened.”

An elderly couple held hands as they walked down South Water Street, maneuvering through crowds of college students. A bouncer at Dominick’s encouraged soon-to-be patrons waiting in line to social distance and stand behind the red markers on the sidewalk.

On the corner of North Water Street and Main Street, Jaleah Read was stationed with other members of Girl Scout troop 91122. Her troop had been selling cookies since that morning, which aligned perfectly with the Kent’s annual celebration. Read and her friends could be heard shouting “Come get your Girl Scout Cookies!” attracting the attention and purchases from nearby bar patrons.

While some waited patiently to get their celebration started, others gathered on street corners to plan their next move — maybe drinks at Ray’s, a quick bite at Panini’s or a short nap back at home. One thing was for certain: the party was far from over.

Rachel Karas is an assigning editor. Contact her at [email protected]

Zaria Johnson is a general assignment editor. Contact her at [email protected]