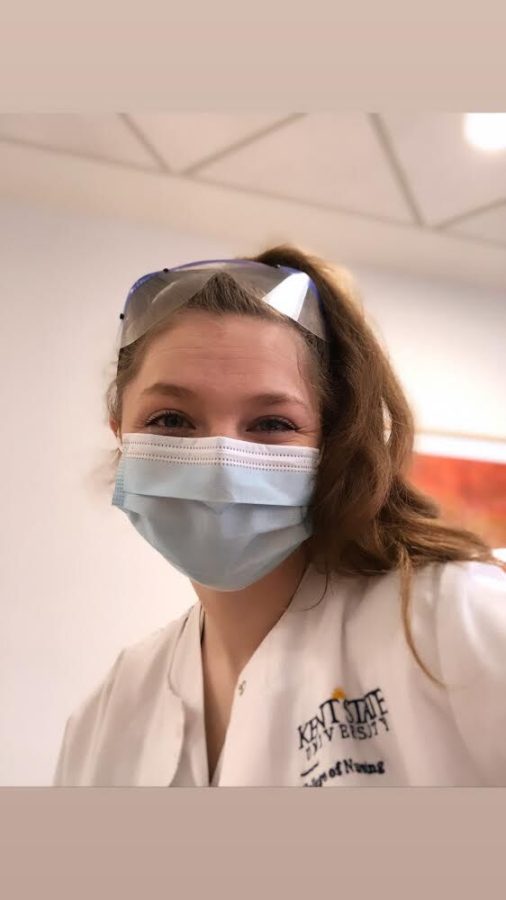 Last semester, as a part of her honors course work in the nursing program, senior Caitlin Woodward had to collaborate with a faculty member to conduct research. Originally hoping to find a study based in pediatrics or mental health, Woodward stumbled upon the Careol project.

“With my luck, no one in pediatrics was available. So I referred to Dr. Hansen and her study on end of life conversations,” Woodward said. “I entered the project with an open mind and in the end I found a true interest in it.”

The Careol project, which stands for catalyzing relationships at the end of life, is a research study conducted by Dana Hansen, an associate professor in the College of Nursing, in hopes of teaching nursing students how to facilitate end of life discussions.

The study involves a collaboration between Kent State College of Nursing and the Northeast Ohio Medical College. Hansen believes the project, with the combined Blackboard course and simulation exercise, allows nursing students and NEOMED students to understand how to facilitate those conversations and help guide families on what to do or say to their dying loved one.

“The most amazing aspect is that the nursing students get real life experience working with doctors and other medical professionals,” Woodward said. “With working alongside the NEOMED students, we’re able to focus on building interdisciplinary team skills.”

The Blackboard course involves activities for students to complete before they go to the simulation. After attending the simulation, the students fill out reflection prompts that help them establish an understanding of facilitating end of life conversations.

Woodward’s role in the study was to come up with the literature review, which is a table that can be used to design all of the curriculum. She also was tasked with researching information on using simulation for undergraduate students.

“By researching information on simulations, I found that students who have used simulations have found it to be successful, as well as the fact that there is a need for more of it,” Woodward said.

The simulation, which will happen on April 6, will be a live broadcast that will consist of live actors acting out different end of life scenarios for students enrolled in the class. As the actors are playing out different situations, students will break out into teams and discuss how they want to handle the rest of the simulations through the use of final conversation tools and creating a care plan.

“The idea behind the simulation is to allow the students to be driving the care. They come up with a plan and figure out what they want to do going forward,” Hansen said.

Due to the study, Woodward said she is no longer interested in pediatrics but instead is now focusing on end of life care and hospice nursing.

“The project, which was focused on the end of life, focused mostly on adult death because you hope that people are older when they die. In that case, it’s not as unexpected as a child’s death would be,” Woodward said. “I’ve enjoyed the process of learning these conversations and the process of growing into an adult.”

Woodward said the study and Hansen have not only impacted Woodward’s field of study, but she said they have also helped her develop a keen interest in the research aspect of nursing.

“Dr. Hansen and this study have definitely made me more interested in the research aspect of nursing,” Woodward said. “Typically when we think of nursing, we think of bedside nursing. Research tends to make students groan and whine, but Hansen made me fall in love with research.”