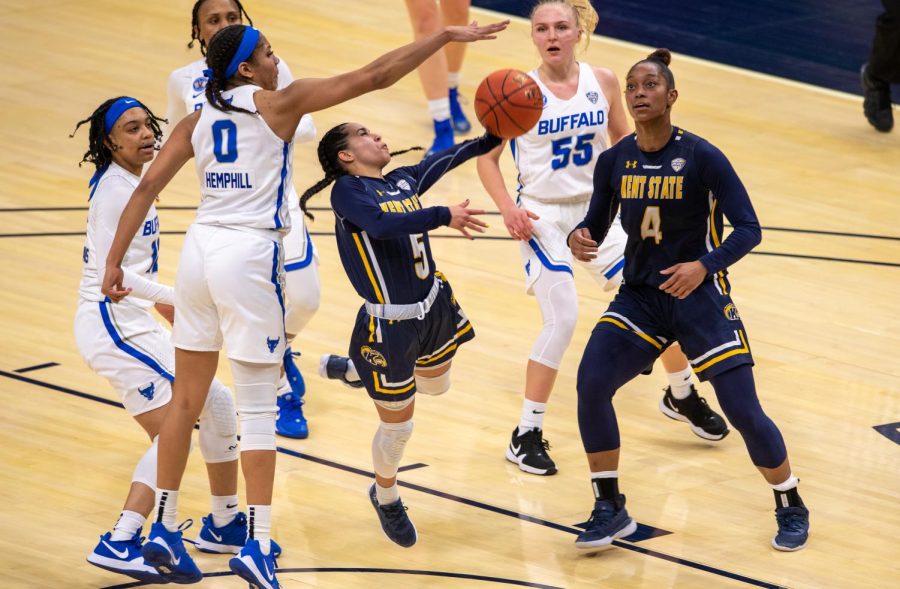 For the third time in four years, Kent State women’s basketball lost in the quarterfinals of the Mid-American Conference tournament to the University at Buffalo.

“At the end of the day, I’m really proud of our players for what they were able to overcome this year and get to Cleveland,” coach Todd Starkey said. “It was a tough game and we’ve gotten Buffalo for four years in a row and it’s a tough physical matchup in the tournament for anybody because they’re a very physical team.”

The Flashes played from behind for nearly the entire game, but a fourth quarter rally cut the Bulls lead to three with 27 seconds left.

But, that’s as close as the Flashes would get, as Buffalo hit a few key free throws down the stretch to seal the victory.

“I was really proud of the way we continued to fight, but we couldn’t quite get over the hump there [at the end],” Starkey said.

Kent only scored 10 points in the first quarter and shot 30.8 percent from the field compared to Buffalo’s 21 points on 62.5 percent shooting.

“We got off to a little bit of a slow start and I think we were just trying to feel our way through the game,” Starkey said. “Against a team like Buffalo, you can’t do that. You have to come out of the gate at 100 miles an hour just like them.”

The Flashes took a nine point deficit to the locker room and in the third quarter held the Bulls to shooting 35.7 percent from the field.

“We started playing a little bit harder and a little bit more focused,” Starkey said. “I thought we were trying to play solid position defense in the first half, but we were late. Our rotations weren’t great, we weren’t talking on defense and we didn’t have active hands.”

The Flashes out rebounded the Bulls 39-33. This led to 16 second-chance points for Kent State.

Kent was led by junior guard Hannah Young with 15 points.

“Hannah is a talented basketball player and she’s kind of changed her mindset and is making a ton of effort plays,” Starkey said. “The scoring piece we’ve always talked about as a by-product of her playing hard. She’s been a big boost for us especially when Clare [Kelly] has been out recently.”

Blackford had her twelfth double-double of the season, grabbing a game-high 18 rebounds to go along with her 12 points.

“I treat every shot like it’s going to be a missed shot and I go and pursue the basketball,” Blackford said. “For me, rebounding is all about wanting to get the rebound and wanting to position yourself in the correct position so that the other team doesn’t get it and you end up with it.”

“To me Dyaisha Fair is the best player in the conference,” Buffalo head coach Felisha Legette-Jack said. “She plays so humble and so much like a teammate that you almost forget that she dropped 30 on a team and that’s on a consistent basis.

“Buffalo’s a tough team to try to get your shooting woes solved against because they are such a physical defensive team,” Starkey said. “They really make things difficult in the paint for you with their size and physicality.”

Kent State finished the season with an 11-9 record overall and a 10-6 record in MAC play. All five of its starters will return next season and look to make another run at the MAC title in 2022.

“I think this team realizes that this group can be special and I think they’re excited about their future together,” Starkey said. “I’m really proud of the way they stuck together and were able to continue to play and be a very dangerous team at tournament time.”

Kathryn is a a sports reporter. Contact her at [email protected]