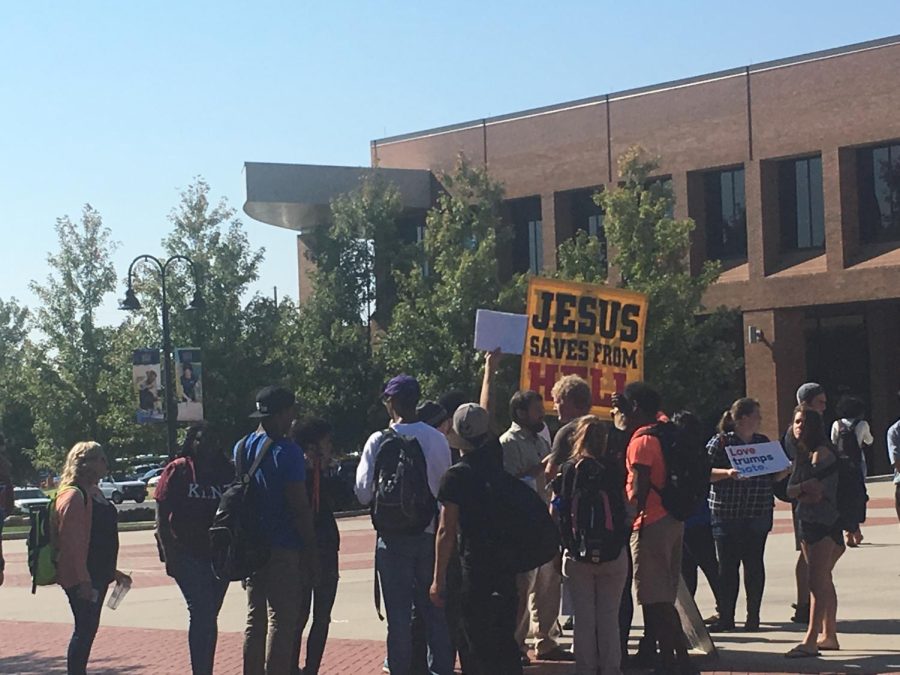 Religious protestors gathered on Risman Plaza Tuesday afternoon to advocate following a faith based on the Christian faith.

The protestors — not affiliated with the university — possessed numerous signs, with one reading “You need Jesus.”

Students who passed near the protestors expressed their disagreement with the religious message the group conveyed.

Mandy Hoskins, a sophomore history major and member of the Kent State College Democrats who observed the group nearby, said they were  reluctant to reveal what church they belonged to.

“They say that they’re spreading the word and the love of the Christian God,” Hoskins said.

Hoskins said one sign in particular portrayed the idea that God demonstrates his own love, but on the other side of the sign, the protestors had written their own ideals of how women should be.

Another sign from the protest also indicated that several groups of people, including adulterers and homosexuals, will not inherit the kingdom of God.

Zoey Smith, a sophomore teaching English as a second language major, said she approached the protest while she was helping a friend with voter registration, and took it as an opportunity to get more students to register.

A man who identified himself as “John,” but chose to not disclose his last name nor the name of the organization he was with, said he came to campus to preach the gospel and the word of Jesus.

“We have a campus ministry where we travel the state of Ohio and visit campuses,” he said. “We are non-denominational, (and) we are not affiliated with any organization.”

He said the purpose of the organization’s demonstration was to prepare others for the life that is to come after death.

Still, some students who observed the protests believed this was the wrong message to convey.

“I feel like the people with the signs, they’re coming at it from a completely wrong angle,” said sophomore aeronautics major Jacob Smith, who is also a member of CRU, “People aren’t going to be receptive to people coming out here and saying ‘you’re going to Hell.’

“I just find it entertaining that someone would be such a bigot and come to such a liberal school,” Bachna said in regards to the protest.

Bachna said she wanted to deter the hateful messages and ease the tension (brought on by the protests) with free hugs.

“I believe it’s okay to believe in whatever you want to,” Davis said. “But when you come out and start doing this, this is an infringement on basic human rights … it turns into bigotry, as opposed to acceptance.”

Davis said hatred and bigotry is not what their religion supports, and came to give hugs because he felt that (hugs symbolized) real love.

Tuesday’s protest was one of a few that have taken place on campus over the course of the fall semester.

Emily Fulmer is a religion reporter. Contact her at [email protected]