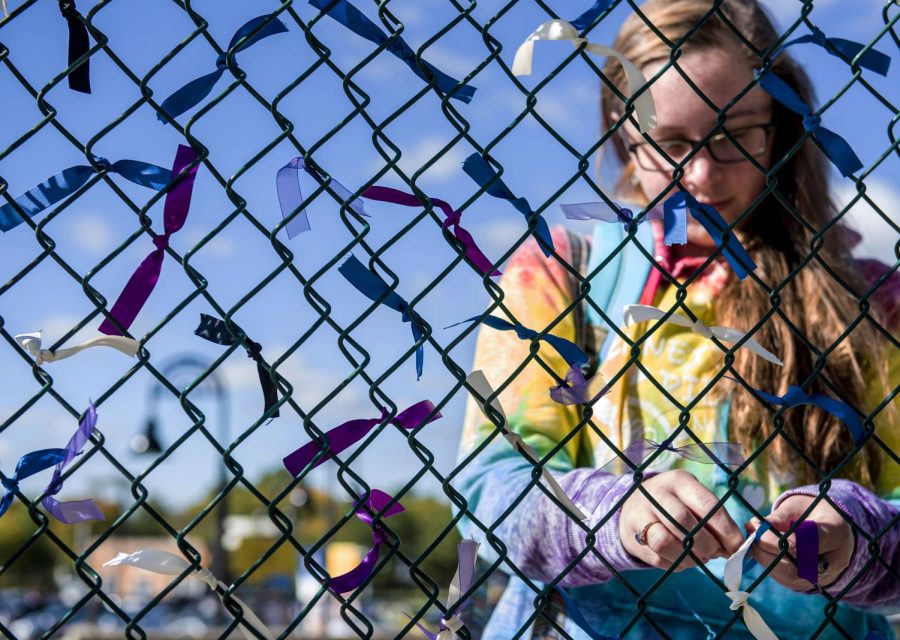 Freshman nursing major Rebekah Wareham ties a ribbon to a piece of fence in front of Kent State's M.A.C. Center on Monday, Oct 10, 2016 to signify that she is an ally of sexual assault victims. The student organization Students Against Sexual Assault allowed passersbys to tie a ribbon if they had been or knew of someone who had been a victim of sexual assault, domestic abuse, or stalking.

Sexual Harrasment Awareness at Kent State from KentWired.com on Vimeo.

With October as Relationship Abuse Awareness Month, Kent State is taking measures to honor the subject matter. This week, Kent State’s Students Against Sexual Assault is having a display set up outside the M.A.C. Center asking students to tie ribbons to a fence if they know someone who has been the victim of sexual assault, or if they themselves have been sexually assaulted.

SASA is a student organization focused on bringing awareness to issues of sexual assault through prevention and education while also providing support for survivors in a nonprofessional context, said Liz Schmidt, a junior international relations major and SASA vice president.

“This is kind of where we get into consent too,” Schmidt said. “Part of sexual assault prevention usually is about teaching people how not to get assaulted, instead of teaching people how … we as a community (can) stop this, or even how … you make sure you’re not violating somebody.”

In addition to educating students on what consent is and what constitutes consent, the organization is also focusing on other issues that relate to sexual assault education.

“Part of the issue with assault — sexual assault and things related to that — is that people don’t really like to talk about them,” said Madeline Anich, a junior political science major and president of SASA. “We’re trying to overcome that silence and overcome these barriers to help facilitate change.”

The fence display is meant to be a symbol for students to interact with on their own terms, and to allow them to see the effects of assault on campus.

Schmidt has been amazed by how powerful the display has been for both students and the organization.

“One of the things about having been sexually assaulted is that it’s very easy to be alone,” Schmidt said. “For the people who are able to tie on ribbons, it’s giving them a way of saying ‘Your story matters, who you are matters.’ When you see how many ribbons there are, you see that you’re not alone.”

There are an estimated 240 ribbons on the fence with four different colors, three of which represent different types of power-based personal violence. The ribbons represent sexual assault, domestic abuse, stalking and ally or advocate.

Ben Holbrook, a freshman zoology major, tied a white ribbon, which represents ally or advocate, to the fence.

“I think it’s really important to start talking about these issues in order to destigmatize them,” Holbrook said.

SASA holds meetings every Tuesday at 7:30 p.m. in the Williamson House.

Adriona Murphy is the education, health and human services reporter, contact her at [email protected]