Kent putt-putts its way to blending businesses with the community 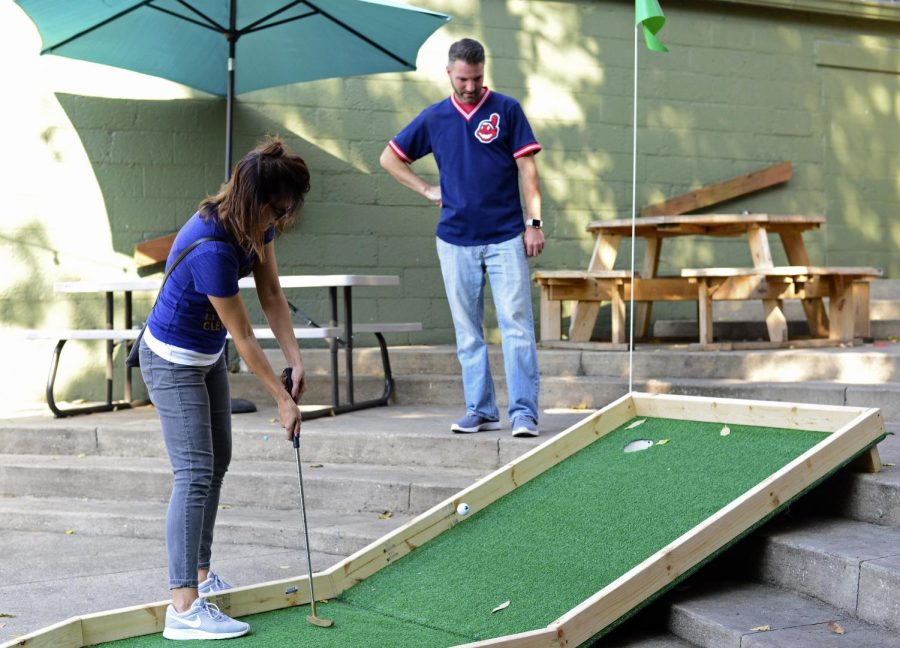 Local residents Teresa and Scott Simone putt-putt at Zephyr Pub in Kent, at the annual Putt Around Downtown event on Saturday, Oct. 15, 2016.

Green golf flags were posted outside of 18 different businesses in downtown Kent on a warm fall afternoon. Multiple groups of people of all ages rushed to each flag, their putters and scorecards in hand.

The second annual Putt Around Downtown event was underway.

The sold out event, hosted by Main Street Kent, turned downtown Kent into a miniature golf course, with holed located at different establishments.

“This gets people into businesses that they normally wouldn’t have ever gone into,” said Heather Malarcik, executive director at Main Street Kent and head of Putt Around Downtown.

The 99 ticket holders visited all 18 holes between 1 p.m. and 4 p.m. on Saturday in a shotgun style. The groups were encouraged to stop to eat and shop downtown at their leisure as well.

Businesses who partook in the event included places like the Destination Kent Visitor Centre, the Kent Cheesemonger and the Rise & Shine Cafe, to name a few.

These businesses created their own personal mini golf courses, either inside or outside. Some gave out snacks, candy and refreshments, and many gave some of their own prizes.

The Kent Cheesemonger had a course set up outside its main entrance. It consisted of a swirled course ending with a big block of plastic cheese the putter had to strategically shoot through.

Not only did this event highlight many of the new places downtown, but it also introduced whole new crowds to some of the older businesses as well.

Matt Guska, manager at Lounge 157, recognized Main Street Kent’s ability to do this, especially with events such as Putt Around Downtown.

When Main Street Kent contacted Guska, he jumped at the opportunity to promote the business.

“We may be overlooked sometimes,” Guska said. “But this will hopefully expose us to different people.”

Zach Wickert is one of those people.

Wickert and his fiancée are from the Hudson area, but heard about the event from some friends in Kent and decided to try it out with them.

“A person from my work said that this event was happening and that it would be fun,” Wickert said. “I have a little putt-putting experience though.”

They spent the day putting and exploring the variety of shops and stores downtown.

“We want people to think of downtown as a place where there is always something to do,” Malarcik said.

The event concluded at the “19th” hole at the Venice Café, where prizes like a $200 putter and more were given to various groups that attended.

“We hope we can definitely continue to do this annually,” Guska said.