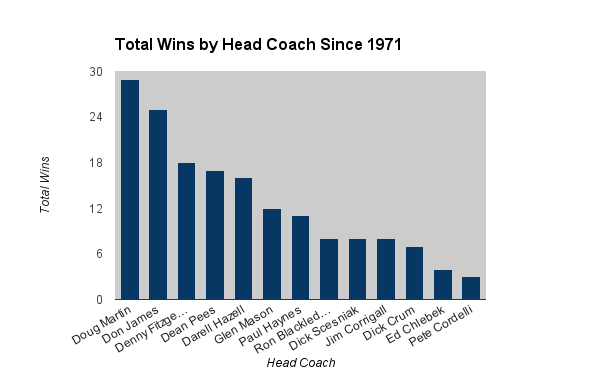 Despite only coaching four seasons at Kent State, James ranks fourth in program history in total wins (25) and has the second most victories since 1971.

On a muggy, late August evening in 2013, Mike Lude sat next to his friend and former colleague, Don James, during the University of Washington’s season opener against Boise State in the newly remodeled Husky Stadium, watching head coach Steve Sarkisian lead UW to a 32 point win over the No. 19 team in the nation.

Two decades earlier, James was the one roaming the sidelines of the historic field that borders Lake Washington and overlooks the scenic Cascade Mountains.

When he was first hired in 1975, most had wondered why Washington took a chance on a guy whose only other head coaching job had been at Kent State.

But in his 18 seasons in Seattle, James took the Huskies from a middle-of-the-road Pac-10 team to a national contender.

He was “The Dawgfather” of Washington football and remained connected to the program long after retiring in 1993.

He served on the committee that proposed the $280 million redesign of the 93-year-old venue and he gave his annual preseason pep talk to the team one week before the start of the season.

But on this day, James was simply supporting the school that had meant so much to him over the past 38 years with his family and longtime coworker.

Midway through the game, his wife, Carol, informed Lude that James hadn’t been feeling well on the hours prior to kickoff. When probed about it, though, the tenacious coach claimed he was fine.

However, James wasn’t one to complain about anything. He had an innate toughness about him that was born on the gridiron of Massillon High School in the late 1940s, bred while playing for the University of Miami and refined as a lieutenant in the U.S. Army.

“Now don’t BS me. Are you alright?” Lude asked his friend.

Inconsistency plagued Lude’s coaching career at Colorado State. There was the 0-10 mark the Rams posted in 1962 – his first season in Fort Collins after spending the previous 10 at the University of Delaware, where he is credited with co-developing the Wing-T offense.

There was the 1966 team that knocked off No. 10 Wyoming en route to a 7-3 record, his only winning season. And then there was the 0-4 league mark three years later that garnered a last place finish in the Western Athletic Conference and his ultimate release.

Shortly after getting fired from Colorado State, Lude was hired by the Denver Broncos to scout college players during spring practice and was subsequently sent to the College of William & Mary, a Southern Conference program led by college football hall of famer Lou Holtz.

“Mike, you ought to apply for the job at my alma mater, Kent State,” Holtz told him.

“Lou, I don’t even know where Kent State is,” he responded. “I know it’s in Ohio and I believe it’s near the turnpike.”

Holtz’s recommendation wasn’t even enough to make Lude entertain the offer. He had been a football coach for the past 22 years since graduating from Hillsdale College, a small liberal arts institution in lower-Michigan, so why would he want to begin a career in athletic administration?

But three days later, when he was at the University of Virginia to observe a practice, his attitude began to shift after Steve Sebo, UVA’s athletic director at the time, convinced him to apply anyway.

So, with nothing to lose, he mailed Kent State his resume, never fully expecting to receive a call from the school’s president.

A month later, in early May, after scouting the University of Iowa, Lude was having dinner with head coach Ray Nagel and his wife at their home in Iowa City.

He wasn’t fully aware of the events that had unfolded earlier in the day until he turned on the television at his hotel room and saw a news bulletin that said that the Ohio National Guard had discharged its weapons on Kent State’s campus, leaving four dead and nine wounded.

In that instant, Lude told himself that if anyone from Kent State ever called him about the job, he would decline without hesitating.

Once spring practices ended at the conclusion of the academic year, he returned to Colorado looking for work and eventually landed a position as an agent for Moore Real Estate Services, the state’s second largest firm at the time.

Dax Moore, the company’s founder, had sponsored a weekly CSU coaches T.V. program all eight years Lude was a head coach and told him that he had an opening if he was interested.

It wasn’t necessarily what Lude wanted to do, but it was steady work, nonetheless.

However, eventually, it grew boring, something so mundane that he couldn’t envision himself continually doing it for an extended period of time.

So, in early July, when Kent State’s faculty representative phoned Lude asking for an interview, he obliged, viewing it as a quick exit from the real estate industry.

If anything, he thought, this was an opportunity to get back into the realm of college athletics, even if it wasn’t as a coach.

In late October — when Lude returned home from his job at Moore Realty —his wife, Rena, told him that the president of Kent State, Dr. Robert L. White, had left a message wanting him to return his call. Almost immediately, Lude phoned White, who quickly informed him that the job was his is he wanted it.

“Mike, we have made so many mistakes in intercollegiate athletics for 25 years. All I want you to do is fix it,” he said. “There’s no office, there’s no staff. There’s nothing.”

After the seventh game of the 1970 season, Dave Puddington grabbed the tan, 8×11 inch manila envelope that he had previously sealed and made his way to the University Inn on South Water St. where Lude was temporarily staying.

Upon seeing Puddington at his door, Lude instantly knew the reason for his visit. When he first became Kent State’s athletic director, Puddington approached him about resigning from his post as the university’s head football coach, citing “the prevailing contagious negativism on campus and in the community” that resulted from May 4 as the main reason.

Though it was almost than seven months post-tragedy and even though Kent State was finally beginning to pull itself back together after the shooting, Puddington wanted an out. And, he thought, starting the campaign with a 2-5 record was the last straw.

But he wasn’t the only one who was having difficulty rebranding Kent State athletics. Despite the fact that he was able to relate to Puddington’s situation, Lude realized that change would have to eventually ensue if he wanted to establish himself as a worthy athletic director.

“David, I don’t want that envelope,” he said. “I got too many problems.”

Prior to Lude’s arrival, Dr. Carl Erickson — head of the division of health and physical education — oversaw the university’s athletic programs and juggled teaching responsibilities with the administrative duties that came with fielding eight varsity teams.

Lacking a work space inside the Memorial and Athletic Convocation Center, White suggested that Lude occupy the empty room across the hall from the president’s office in the administrative building. It wasn’t necessarily an ideal situation, he thought, since White could constantly monitor his progress, but as time wore on, he grew accustomed to it.

If anything, it helped inflate his nonexistent reputation as an athletic director since word spread throughout campus that he must have been overqualified if White wanted him in the office next to his.

He then appointed an assistant athletic director, sports information director and business and ticketing manager in an effort to bridge the gap between the local Northeast Ohio communities and the university in terms of fan support.

Once that was done, he had to figure out what to do with Puddington.

But after losing, 20-8, to Miami (OH) on Nov. 14, the head coach once again returned to Lude’s room at the University Inn, envelope in hand.

And this time, he accepted the letter of resignation — effective after the season’s final game against Xavier – simply because he had a handwritten note with the names of the top six coaches he wanted to interview on a folded sheet of paper stashed in his shirt pocket.

Besides, topping the list was Don James, the University of Colorado’s defensive coordinator.

James, who had grown up in nearby Massillon and played high school football for Chuck Mather, had connections in Ohio and therefore could easily recruit the state.

He had extensive experience playing and coaching in the south against Atlantic Coast and Southeastern Conference teams during his time as both a quarterback and defensive back for Miami. He was a graduate assistant on Mather’s staff at Kansas from 1956-57.

He had spent six years as the defensive backs coach and defensive coordinator at Florida State. And he had worked under legendary coach Bump Elliot at Michigan.

But what really stood out to Lude was the fact that, while James had always been a defensive-minded coach by trade.

Although Lude had originally planned to call James the next afternoon to see if he would be interested in his landing first head coaching position, James phoned him first, bluntly stating his intention.

“Mike, I’d be interested in that job,” he said.

“Get your briefcase together,” Lude replied. “Put a couple of clean shirts in it and there will be a ticket for you at Denver Airport to fly out to Cleveland and come and see me.”