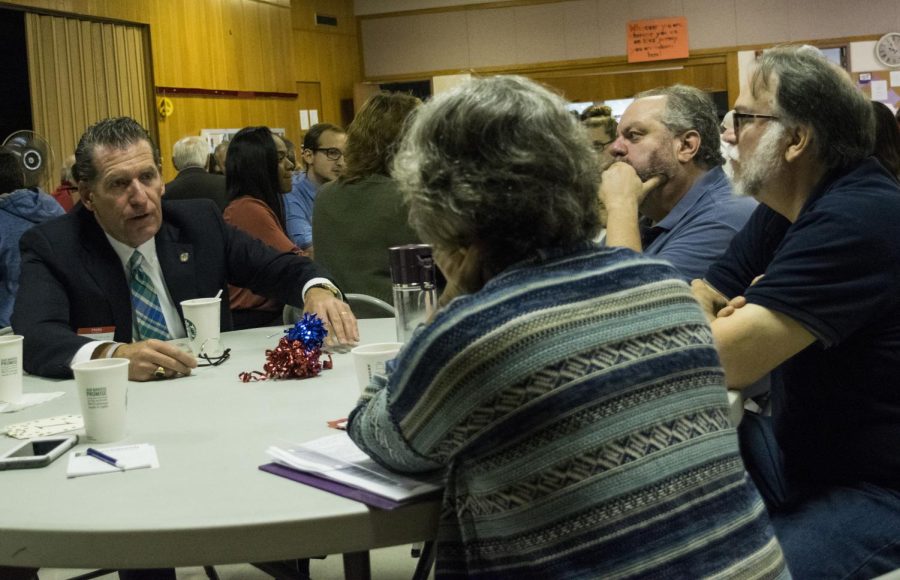 Ohio Sen. John Eklund speaks to potential voters during the Face2Face forum at the United Church of Christ in Kent on Saturday, Oct. 8, 2016.

The League of Women Voters of Kent held the Voters and Candidates Face2Face forum Saturday at the United Church of Christ in Kent.

During the forum, attendees sat at tables with event facilitators and a local candidate for 10-minute intervals. At the end of each segment, the candidates moved to a new table. During each session, candidates were allowed to make a brief timed introduction, then the small groups were able to ask whatever questions they wanted.

“It’s like speed dating with candidates,” said Iris Meltzer, president of the League of Women’s Voters of Kent.

Meltzer said she was inspired to create this unique face-to-face style event after attending many traditional forums, where only selected questions were asked and many candidates just gave prepared remarks.

Rootstown Township resident Theresa Summers said she attended the event for the first time, in part, because of her ties to public service, but also because of her interest in the current election.

“It’s a nice way to actually talk to someone one-on-one without having to just do a political speech,” Summers said. “You actually get to ask about hot button issues, which I did.”

Some of Summers’ questions related to the allocation of funds for local government and nepotism in politics.

The most talked about topics of the day were the heroin epidemic, education, the budget and jobs.

The League of Women Voters of Kent invited all 26 candidates involved in local elections; of those, 15 candidates attended. Meltzer said most candidates find this forum style refreshing.

“This is the best candidates forum in Kent,” said Portage County Commissioner candidate Mike Kerrigan. “Any opportunity to interact with people individually is the best way to campaign. You can throw a ton of money into (television), radio and mailers, but at the end of the day, where you get the votes and the connection is knocking on doors, going to candidate forums, and making phone calls.”

Kerrigan said he often uses these types of community outreach programs to shape his public policy to ensure he is meeting the needs of his community.

Many of the candidates shared his sentiment. Several of the candidates who took part in the forum are running unopposed, and chose to use the event strictly as a way to check-in with the community and allow attendees to ask any questions or voice concerns.

On top of the high candidate turnout, many Portage County voters were in attendance, including numerous Kent State students.

The forum was one of the options for community engagement events included in the university’s First-Year Experience course.

Mary Jane Carr, a senior advisor in the exploratory advising center, was at the event to help facilitate FYE’s involvement.

Carr was pleased with the student turnout and how they responded to the forum.

“Many of the students were impressed they actually got to spend time with candidates,” Carr said. “The students discovered the impact that local government has on their lives.”

“Since this is my first election, I don’t know what to expect — unlike some of the more experienced voters here,” Eaton said. “It is helpful getting to see the candidates and know what they are standing for, face-to-face.”

Eaton said he believed the event helped him get more informed about the upcoming election and will be helpful in deciding who to vote for.

“I’m glad they are doing this, and I’m glad I got the opportunity to come here,” Eaton said.

Meltzer said she thought the event went fabulously and was very happy about the number of candidates and participants in attention, especially the Kent State student turnout.

“I am beyond pleased that there were so many young people here,” Meltzer said. “That is our future. Learn about voting, learn about civic engagement and learn about how (to) decide for whom you are going to vote.”

Brooke Forrest is the student politics reporter, contact her at [email protected]