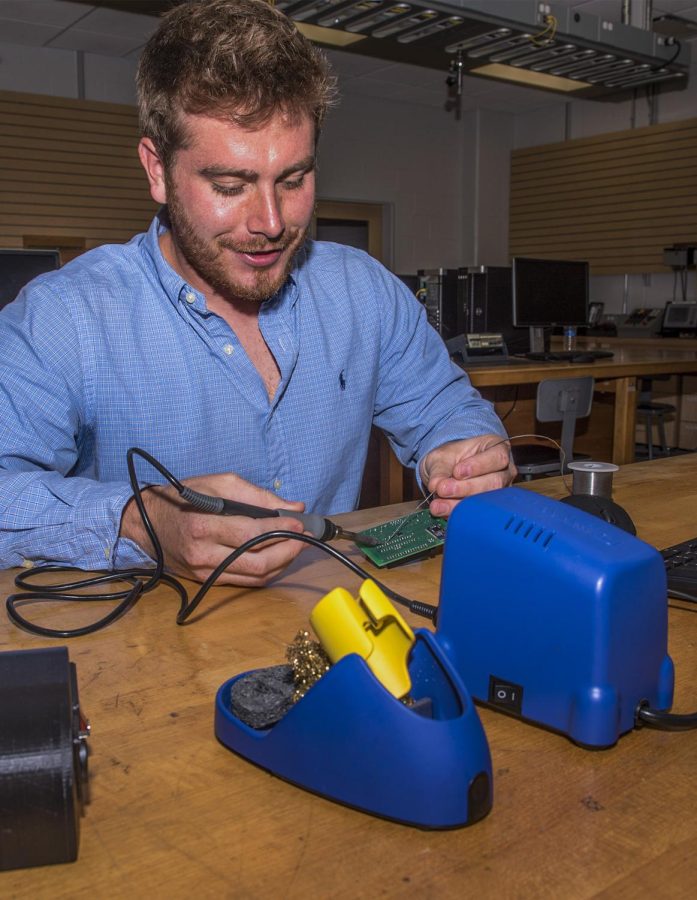 Senior applied engineering major A.J. Morganti displays the electronic components of his invention, which helps to heat and regulate materials used in water pipes and hookahs. He also developed a phone app that controls the device wirelessly. Wednesday, Oct. 12, 2016 in the Aeronautics and Technology Building.

When Albert Joseph (A.J.) Morganti’s friend’s electronic vaporizer broke, he thought he could fix it. He then began a business named DnMInnovations LLC, where he builds and sells his own vape machines.

“I tinker with electronics,” said Morganti, a senior applied engineering major. “I say that instead of ‘engineering’ because I do it as a hobby. Even when I’m at home, instead of playing video games, I create things.”

Morganti’s fascination for tinkering began when he was a little kid taking apart and rebuilding his toys.

“As I got older, to save my mother money, I would fix the broken appliances to save her from calling a repairman,” Morganti said. “The only way to fix things is to take them apart and see how they work.”

Morganti said it all started when his friend bought an electronic vaporizer — a machine used to vaporize either liquid or the active ingredient of plant material — at a local head shop.

Within a few days, it broke, so Morganti looked up the parts online and found that buying just the parts was cheaper.

“I make everything from the ground up,” Morganti said. “The circuit board is what I take pride in.”

There are no “off-the-shelf parts,” and he even has his own 3-D printer to make the casing for the machine.

There’s also a variety of features within the vaporizers, such as Bluetooth capability. The Bluetooth allows users to set the temperature of the machine and sync it with their alarm on their phone. When the alarm goes off, the machine turns on and heats up.

Since the vaporizer isn’t portable, it plugs in and can fit into the palm of your hand. There are also safety features like an automatic shut-off that can be set, so if the user has to run out the door, it’ll turn off within in an hour or two — depending on the settings.

Although the building of the machines started off as a hobby, it quickly turned into a business. Morganti said the sale of the first 17 was through referrals.

This is Morganti’s sixth year at Kent State. He admitted to failing some classes, but — knowing that this is the degree he needs to get the jobs he wants — he’s worked harder and made the dean’s list last semester.

Along with the Instagram page, he made a website which helped to make his company look more professional and boosted his business.

Now, Morganti is working with a company in the state of Washington called Toolless Plastic Solutions Inc. It does injection molding that’ll make the cases look smoother and glossier, as opposed to the 3-D printed cases that emphasize the graininess in the casing.

Morganti was also approached by an Instagram follower, Jeremy Altman, an entrepreneurship major at Temple University.

“As soon as I understood what A.J. had made, I knew it was something I wanted to be a part of,” Altman said. “I slid into his DMs, so to speak, and we ‘nerd flirted’ for a few weeks before I officially joined in with the business.”

At first, the two were apprehensive about working with someone that they couldn’t get to when physically needed. Most of the initial business was being handled via video chat, text and email. However, this past summer Altman took a bus to Kent to meet A.J,. and they spent the entire week building.

Altman described their relationship as a perfect pairing, calling Morganti a “serial inventor” and himself a “serial entrepreneur.”

“I’m just a nerdy engineer,” said Morganti on his partnership with Altman. “I’m not one to push sales. I can make it but I can’t sell it, and that’s what he specializes in.”

They are currently in the process of finalizing the design to have it ready for manufacturing, and are also in communication with several distributors that have expressed interest in their product.

The team plans to be in every vape shop in the country. Morganti is happy with this success so far, and is proud of his business. Altman is looking toward the future and said that together or apart, they both have bright futures to come.

Gabrielle Harrison is the technology reporter, contact her at [email protected]