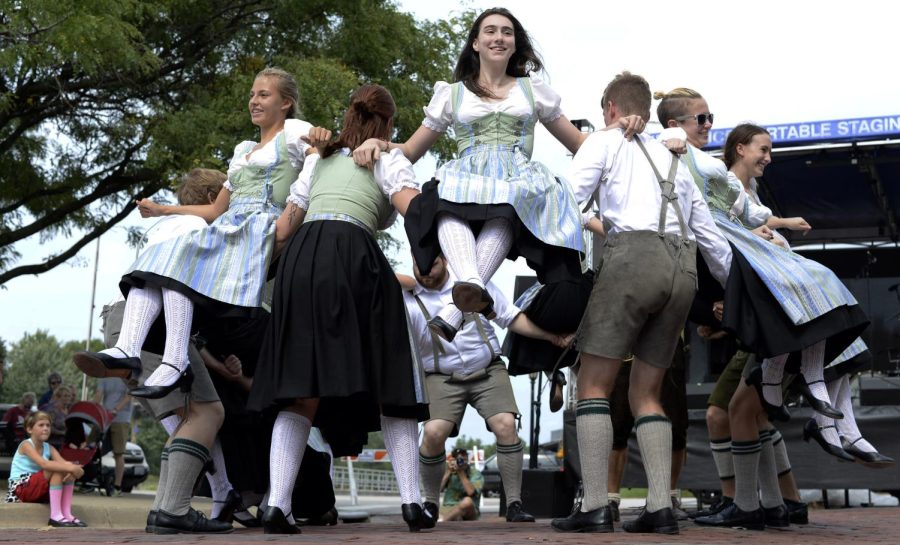 An overcast sky covered the crowd standing out on the red brick Franklin Avenue in downtown Kent on Saturday as five contestants made their way to the stage. The smell of fall seasonal beer and bratwurst sits over the crowd.

These five volunteered to try out their yodeling skills for the occasion.

“Very good, very good,” said Aaron Dussing of the band Polka Revolution, as called into the microphone with his German accent, his accordion playing tunes while encouraging the group of volunteers.

For the next 15 minutes the crowd, all clutching their matching Kent Oktoberfest mugs, watched closely as the five contestants tried to mimic Dussing’s expert yodeling.

After many attempts to yodel, and much praise and laughter from the crowd, two contestants were chosen as the winners.

“Now I have a yodeling pickle!” said Sarah Sloan, one of the contest’s winners, as her daughters played with her prize. The prize resembled a child’s doll, instead holding a pickle that yodeled at the touch of a button.

Sloan wasn’t the only one to immerse herself in the German culture over the weekend. This year’s Kent Oktoberfest was a festival in which all could celebrate German culture.

Although the weather delivered showers off and on throughout day, the rain did not stop the festivities. The street was filled to the brim with vendors from places like Ray’s Place and Grazers, serving their German style cuisine.

Foods including many classic German favorites, like bratwurst, potatoes and sauerkraut.

Festival goers, many found wearing grey and black Kent Oktoberfest long-sleeved shirts, enjoyed multiple other events at the festival besides the yodeling and food.

The festival also hosted much more music by bands such as Polka Revolution and John Patrick & the Outside Voices.

“I didn’t even like Polka,” said Tyler Ferguson, band member of Polka Revolution, when asked about the times before he started playing music for a German influenced band.

Ferguson, who is currently going to school to study music, found himself starting Polka Revolution with his friends more than six years ago when all its members were still in high school.

Now, after all the band’s progress and success, Ferguson said he understands and appreciates German music, and culture, much more than before.

Playing for people, and watching them dance to the music, Ferguson said, is what he truly enjoys and cherishes during Oktoberfest.