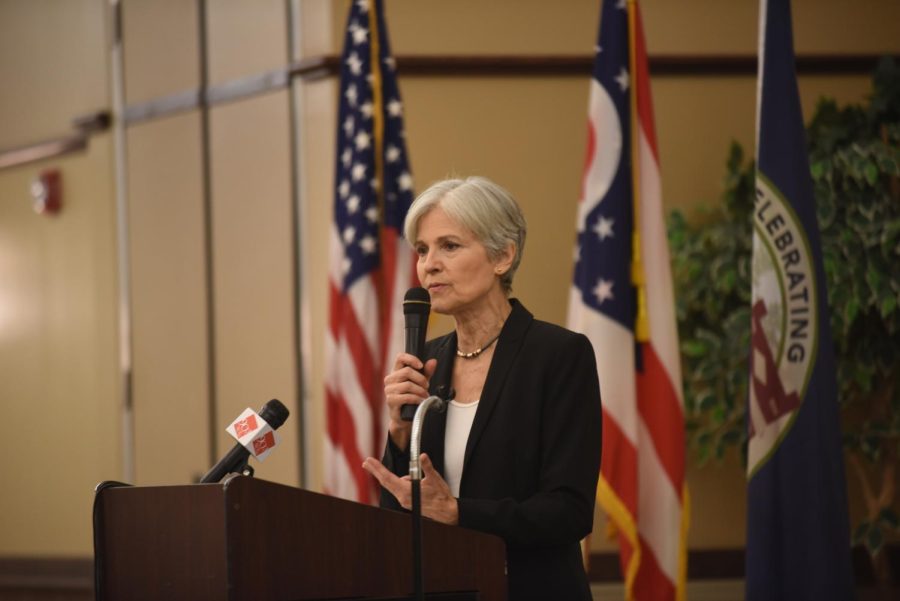 Jill Stein, Green Party presidential nominee, addresses the crowd of supporters during her speech at the Natatorium in Cuyahoga Falls, Ohio, on Friday, Sept. 2, 2016.

Upon accepting the 2016 Democratic presidential nomination July 27, Hillary Clinton spurred headlines proclaiming the making of history. She had become the first woman nominated to a major political party’s presidential ballot.

What the headlines did not mention was the Green Party’s earlier 2012 presidential nomination of Jill Stein. And, with little fanfare, Stein’s 2016 nomination was well hidden in the shadow of Clinton’s historic achievement.

Stein carried less than 1 percent of the vote four years ago, garnering approximately 460,000 votes, according to Ballotpedia. As of this report, Real Clear Politics has her polling at about 3 percent against Clinton, Republican nominee Donald Trump and Libertarian nominee Gary Johnson.

Even in the face of single-digit polling numbers, Stein has brought rubber to the concrete to take her campaign across the country. On Friday, she made a campaign stop in Cuyahoga Falls, decrying the current state of the two-party system.

Stein is running her 2016 bid on a platform her campaign has dubbed the “Power to the People Plan.”

The plan’s mission statement proposes “moving from the greed and exploitation of corporate capitalism to a human-centered economy that puts people, planet and peace over profit.”

With undertones of Sen. Bernie Sanders’s (D-VT) earlier 2016 run on the Democratic ticket, Stein has outlined her stances with a heavy emphasis on social rights.

She reflected on her campaign thus far before launching into a speech touching on nuclear weapons, the military budget, free trade agreements and the woes of the binary political system.

A major plank in Stein’s platform is her Green New Deal.

“It’s like the New Deal that got us out of the Great Depression,” Stein said.

Her platform wants to stymie the use of fossil fuels and become 100 percent reliant on renewable energy sources.

“We guarantee a just transition for energy workers,” she said. “This is not about green capitalism, this is about creating good jobs with living wages … in a healthy living environment.”

“(It) will prevent climate change because we call for 100 percent clean renewable energy by 2030,” she said. “We call for an immediate ban on all new fossil fuel infrastructure.”

“We have a generation that’s been basically thrown under the bus … they are locked into debt that they cannot repay,” she said. “There are 43 million people trapped in student debt, and it just so happens that it takes 43 million people to win a three-way election.”

Stein expanded on her education platform by calling for a reform on public education in all communities great and small. “The reality is, if you want to educate kids, the one thing you have to do is get rid of poverty.”

Luster wants to start a student organization on campus that would bring Green Party subscribers together.

“We need a third party to help organize progressive efforts … I like Jill Stein’s Green New Deal and her environmental plan,” he said.

Luster was there for Stein as much as Green Party U.S. Senate candidate Joe Demare (Ohio).

Prior to the event, Demare, who lives in Bowling Green, was mingling with the waiting crowd.

“This is a very exciting time to be a Green Party candidate,” Demare said as he made some last-minute notes for his upcoming speech. “It’s time for change and we’re here to help that change happen.”

“I look at the Green Party like any other party, except we have principles. Every Green Party candidate follows our 10 key principles,” he said. “With Democrats and Republicans, they can take any position that they want and often flip-flop.”

“I think higher education should be free for everyone and never stop. People should be able to go to school for the rest of their lives,” he said. “A lot of us are operating from our high school education from 20 or 30 years ago.”

“The Federal Reserve could buy the debt that the bank holds,” he said.

As Stein’s speech drew to an end, she called her audience to action by urging the crowd to reach out to their neighbors and spread the word of the Green Party.

“We are the ones we are waiting for,” she said.

Karl Schneider is the senior editor for KentWired, contact him at [email protected]