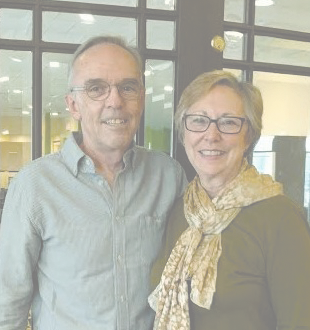 Rick and Francine “Cini” Anstey met 51 years ago on a double blind date in Verder Hall.

The couple hit it off immediately and a lot of their Kent State memories include each other. They would sit in The Hub between class, completing crossword puzzles in what was then called The Daily Kent Stater. They spent weekends downtown with friends and at parties thrown by Rick’s fraternity, Phi Gamma Delta.

The Ansteys will be making the drive to Kent for “Kiss on the K,” an annual Homecoming event that has alumni couples embrace each other in Risman Plaza, this weekend. The two will be one of the 2016 honorary couples.

Rick graduated in 1968 with a business degree, but with the Vietnam War in full swing and being draft eligible, he had a difficult time finding a job. Rick wasn’t drafted, and moved to Pittsburgh with Francine’s family to look for a job. In 1969 Rick began working at Westinghouse Electric Company.

Rick and Francine knew they wanted to build a life together.

“We went to Pittsburgh together to ask for permission for us to marry, and her dad said no,” Rick said. “A year later, after Cini graduated, we popped the question again, and he finally said yes … we got married in 1969, almost to the exact day we met four years prior.”

Francine graduated in 1969 with a speech pathology and audiology degree. She then went on to get her master’s degree at the University of Pittsburgh. Francine, who has a passion for teaching and working with deaf children, was offered a job at the Western Pennsylvania School for the Deaf in Pittsburgh, a mile from Westinghouse Electric Company.

In 2007, the Ansteys moved into a condo in downtown Denver. The couple said they enjoy the city life because it often reminds them of their years spent in Kent.

They have four children — two living in Denver, one in Atlanta, and one in New York City. Rick and Francine spend their retirement driving throughout North America, spending time with their children and grandchildren and enjoying the outdoors.

“We feel quite special and very honored,” Cini said. “We get a giggle over being selected because we don’t see ourselves as being that special.”

“You don’t have to be an Honorary Couple to participate,” said Marquita Rodgers, program coordinator of the university’s alumni relations. “Grab your partner and come for kisses.”

Mallory Cox is an alumni relations reporter, contact her at [email protected]