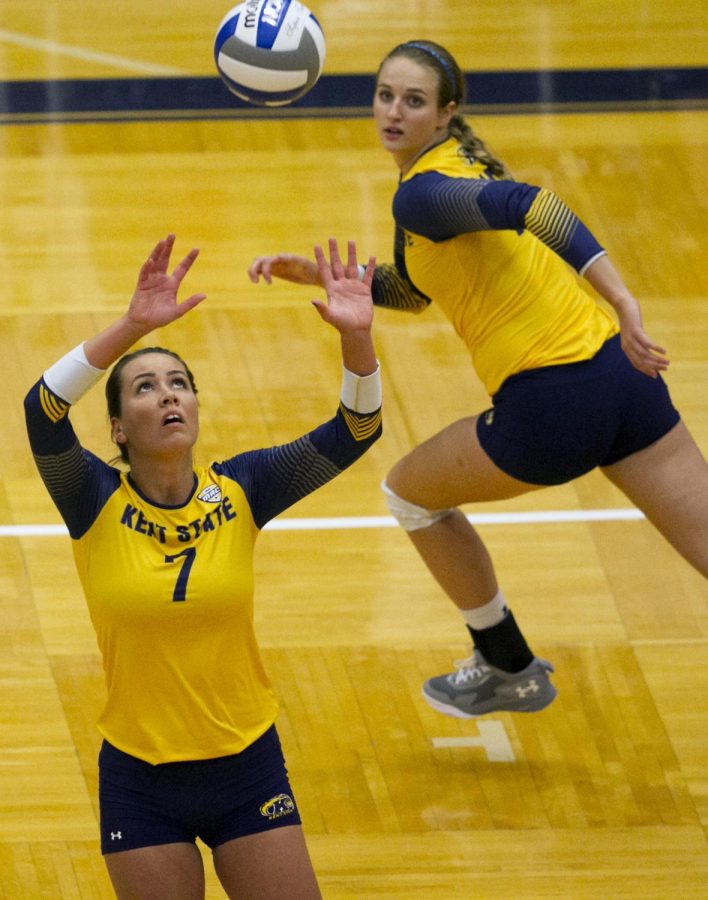 With the score knotted at 21, Kent State volleyball coach Don Gromala huddled around his players near the foul line of the M.A.C. Center to deliver a simple message.

Even though the volleyball team was ahead by two sets and was on the verge of sweeping visiting Robert Morris University, Gromala noticed his players’ offensive sets had become predictable and allowed the Colonials to climb back into the contest.

Gromala told his players to focus on their side of the net and penetrate the Colonials’ front three blockers. And after the timeout expired, the Flashes resumed the set and did exactly what their coach instructed: sophomore Lexi Mantas used a pair of kills and two attack errors from Robert Morris’ Deja Tamlin to snap a two match losing streak in front of a thunderous crowd at the M.A.C. Center.

“I think we almost had, like, a thousand people here. That’s so awesome to have the support from all the student-athletes and just people here at Kent,” said senior middle blocker Drew Norberg. “It’s awesome to get used to playing at home and feeling the energy. We kept saying we needed to have more energy on the court, but it was almost too loud in the M.A.C. that we couldn’t hear each other.”

The Flashes began the first set by scoring four-straight points and used a Robert Morris attack error to take a 6-1 advantage. The Colonials then got back-to-back kills by April Krivoniak and Allie Yurkovich to cut the deficit to three.

However, following a Robert Morris timeout, Kent State cushioned its lead to 10 courtesy of a Schaely Renfrew service error and used a junior Amber Gerdeman kill to take the first set, 25-14.

Despite the fact that the Colonials took their first lead of the match early in the second after a Kojic error, the Flashes responded with kills from Gerdeman and junior Heather Younkin and a Robert Morris ball handling error.

Both programs then matched each other point for point throughout the second until a 4-0 Kent State run gave the team its second consecutive set victory.

“It’s always important to come out strong after doing well the first game to keep that energy going into the second game,” said Norberg, who led the Flashes with 12 kills.

“During the second game we sometimes get a little too laxed. We need to stay hyped so it was really good that we kept our energy during the first and second game.”

The Colonials wouldn’t go down quietly in the third set, jumping out to an early 8-6 advantage. Kent State trailed midway through the set until a Norberg kill tied the set at 14. Even though the Flashes tallied the next three points, they couldn’t pull away, which prompted Gromala’s speech that rallied the Flashes to four unanswered points and the victory.

“Consistency and learning when to take risks and when not to (is the biggest takeaway),” Younkin said. “I feel like we did good attacking their block, mixing it up with hard-driven balls and tips.”

Despite a strong showing Tuesday night, Gromala only has one full day of practice to work out his team’s offensive kinks before playing the University of Dayton, Austin Peay State University and the University of Evansville in the Dunn Hospitality Tournament.

“We’ve been focusing on some different things offensively. We want to see that come into play against three strong opponents this upcoming weekend,” he said. “That’s going to be our biggest focus — our offense — moving into tomorrow’s practice. We need to make sure we get done the things we need to do tomorrow with our long, full practice before we compete again Friday morning.”