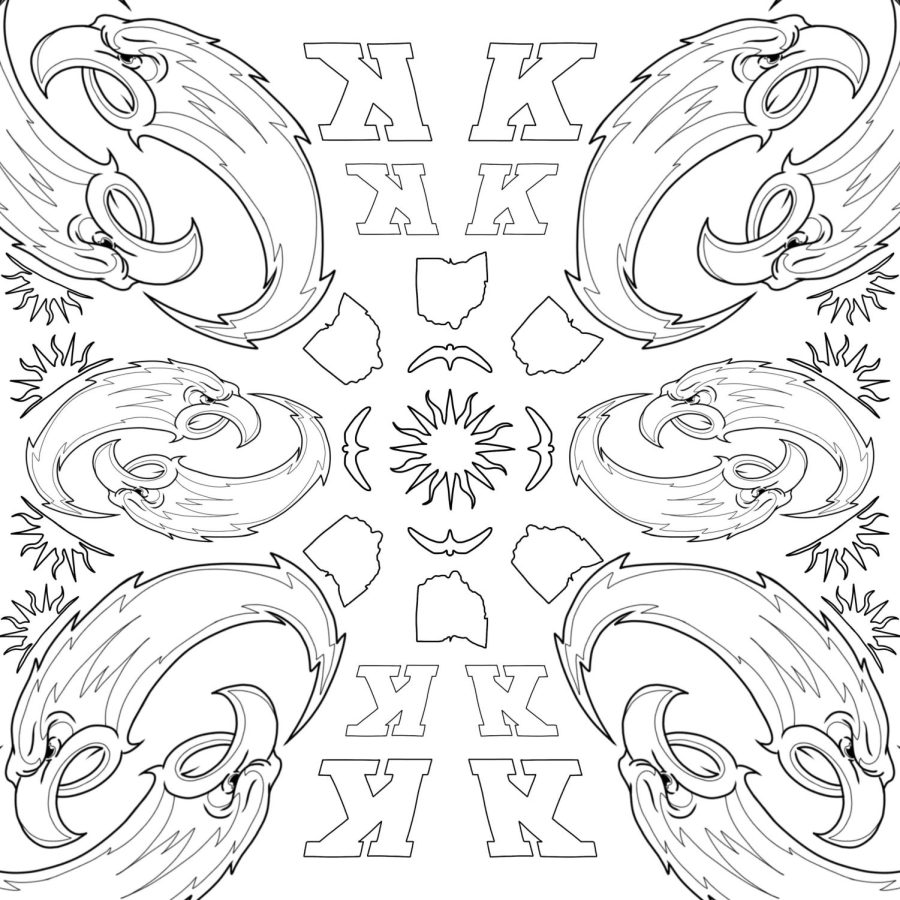 Relieve some stress with this exclusive Kent State-themed coloring page, designed by local artist Audrey Henry. Henry, who created an adult coloring book titled "Selfies," said she thinks the trend is so popular because "people like to feel artistic and indulge in their creative side."

It may be time to sharpen that old set of coloring pencils.

The coloring book — no longer banished solely to elementary school classrooms —has graduated to the mainstream, tapping into a consumer market of adults hungry for stress-reducing hobbies.

“I’ve done a variety of different coloring books,” said freshman psychology major Leanna Miller. “You’re concentrating on filling in the lines right and deciding on colors, so it kind of takes your mind off the things making you stressed.”

According to Nielsen’s book industry year-end review, adult coloring books really caught on in 2015 with an estimated 12 million copies sold, dwarfing the 1 million sold the year prior. The highest-selling adult coloring book on Amazon as of now — “Release Your Anger” by James Alexander — consists of intricately designed profanity for readers to color.

Although the grown-up coloring book only recently went mainstream in a big way, art therapy is not a new concept for psychology professionals.

“The idea that doing art is therapeutic and puts you in a calmer, more relaxed state has been around for a long time,” said Karin Coifman, assistant professor of psychology at Kent State.

Coloring, drawing and many other tasks, she said, can be considered a “mindful activity” designed to make one feel “present in the moment.”

“Coloring is just another form of meditation,” said Coifman, who has prescribed coloring to patients before. “It allows the individual to quiet their mind — basically to get yourself out of your own head.”

A cure for stress is of top priority to most college students. For others, it’s just a fun way to unwind.

“On some days it is helpful to relieve stress, but for the most part, I just do it when I’m bored,” said senior English major Rebecca Major.

The time of day one colors could be important too. In fact, the act of scribbling in a coloring book is most constructive just before nap time.

“You’re disconnecting from things that are charged and stress-inducing, like screens,” Coifman said. “It doesn’t necessarily have to be in a coloring book, but disconnecting from screens for even 20 minutes before bed can be beneficial.”

Not all of the prosperity is for consumers reaping mental peace through coloring. There’s no denying that the adult coloring book industry has evolved into a lucrative business for producers as well.

Nielsen also estimates that more than 2,000 adult coloring books were published in 2015, and that Americans spent $128.2 million on colored pencils between May 2015 and April 2016.

“(The adult coloring book trend) has lasted longer than I expected,” said Christine Brooks, publication production manager at the KSU Press. “It’ll definitely taper off eventually, but I think it will always be around.”

Based on Nielsen’s consumer data, females account for nearly three-quarters of sales, and Millennials are 29 percent more likely to purchase an adult coloring book than other consumers.

“I have young children, so I color all the time,” Coifman said. “I think people are always looking to relax and feel better.”

Melissa Ziminsky, adult services manager at the Kent Free Library, said turnout to library-hosted adult coloring events has been respectable and spans all ages, 18 and up.

“It’s a chance for adults to just relax,” Ziminsky said.

The city’s library runs informal coloring events throughout the year, with the next scheduled for Saturday, Nov. 5. Once registered, patrons can expect to utilize a selection of provided coloring utensils, listen to classical music and color any stress away.

“I love adult coloring books because no matter what you’re interested in, there’s one for you,” Ziminsky said. “Plus, you can’t really do it wrong.”

Benjamin VanHoose is an assigning editor for the Kent Stater. Contact him at [email protected]