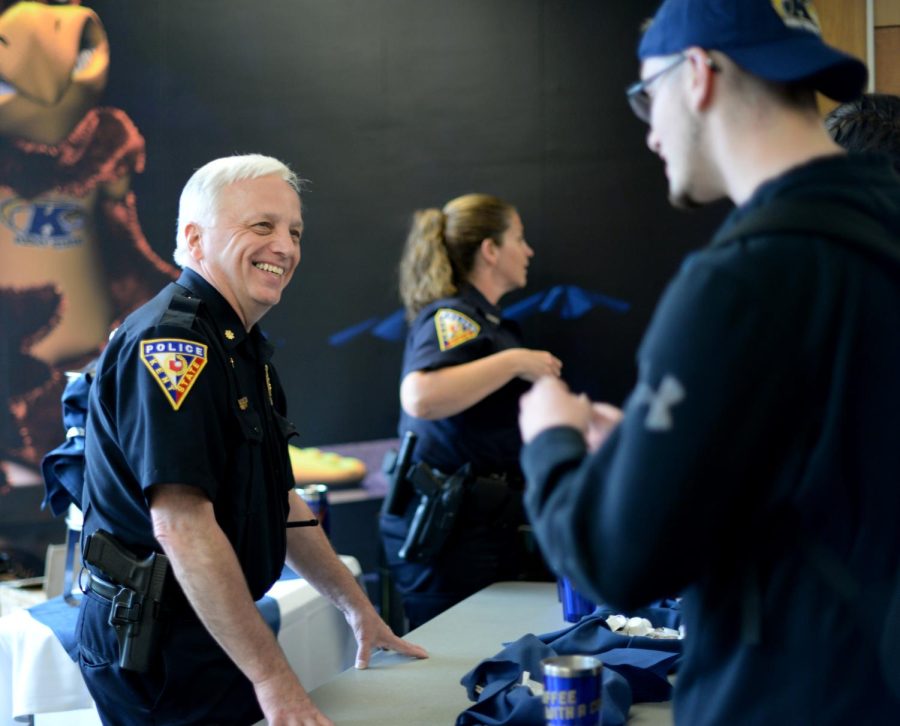 Assistant Chief of Police William Buckbee serves coffee to Chad Morrison in the Nest at Kent State on September 14, 2016. Wednesday afternoon, police hosted “Coffee with a Cop,” to pass out free coffee to students so they could answer any questions students had about their services.

Coffee with a Cop connects students with Kent State Police Department from KentWired.com on Vimeo.

Members of the Kent State Police Department spent Wednesday afternoon reaching out to students with one of their favorite drinks — coffee.

The department’s first ever “Coffee with a Cop” event gave students the opportunity to drink coffee with campus police officers and ask them questions in a more relaxed environment.

“There’s a lot of people who are kinda scared to call the police if they have a simple question or are curious about what we do, so we’re offering a relaxed atmosphere,” said Tricia Knoles, a Kent State police officer who organized the event.

Students and faculty gathered in the Student Center Nest from 2 to 4 p.m. to ask those questions; the first 200 participants even received a Kent State Police travel mug.

One student in attendance was freshman aeronautics major Erika Perko, who attended the event to ask about joining the department’s dispatch team.

“I saw a little flyer on the tables in the HUB and I thought it would definitely be a good idea for me to come over and get some information,” Perko said.

While Perko received information on the dispatch team, other students found out something even more interesting: the university police department is separate from the city’s.

Kent State Assistant Police Chief Bill Buckbee, who served coffee at the event, said the department gets that response constantly.

“We do a survey of everybody on campus, and based on the answers, it seems a lot (of) people don’t realize that there’s a difference between the campus and university police department,” he said.

This is a problem that Knoles aims to fix on campus, and Wednesday’s event served as the first step to her bigger plan: a better understanding of the Kent State community.

“Part of my job is relating to the community and providing education to our community,” Knoles said. “(‘Coffee with a Cop’) was something I wanted to do for that.”

Knoles also said that the event was an opportunity to establish a conversation with students and break stereotypes about police officers.

“We’re people too,” Knoles said. “I know sometimes people see the uniform and you’re just known as a cop.”

The plan might already be on its way, as Knoles and Buckbee both considered the event to be a success after their two-gallon pitcher of coffee ran out within a half-hour.

Knoles also said she has been planning events like this for nearly a year, and she is currently planning more.

The department’s next community event takes place at the end of the month with the Police Experience Academy, where students can sign up to experience the duties of a police officer.

Mitch Felan is the safety and transportation reporter. Contact him at [email protected]

The video was produced by Crystal Smith. Contact her at [email protected]