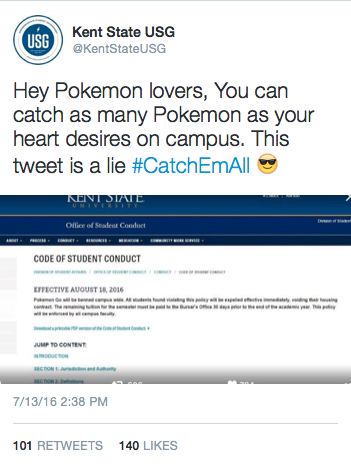 In case you missed it…

On July 11, Twitter exploded with news of Kent State allegedly banning “Pokemon Go” on its campus, with the threat of expulsion for any students who were caught playing on campus grounds. The rumors began circulating after a Photoshopped image of the Kent State student Code of Conduct was posted on Twitter, with a line stating: “‘Pokemon Go’ will be banned campus wide. All students found violating this policy will be expelled effective immediately, voiding their housing contract. The remaining tuition for the semester must be paid to the Bursar’s Office 30 days prior to the end of the academic year. This police will be enforced by all campus faculty.”

For 48 hours, students reacted on Twitter – with some finding the image to be funny and others upset by the alleged banning of the summer’s most popular game.

On July 13, both Kent State’s Undergraduate Student Government and the official Kent State Twitter posted messages in support of “Pokemon Go” being played on campus.