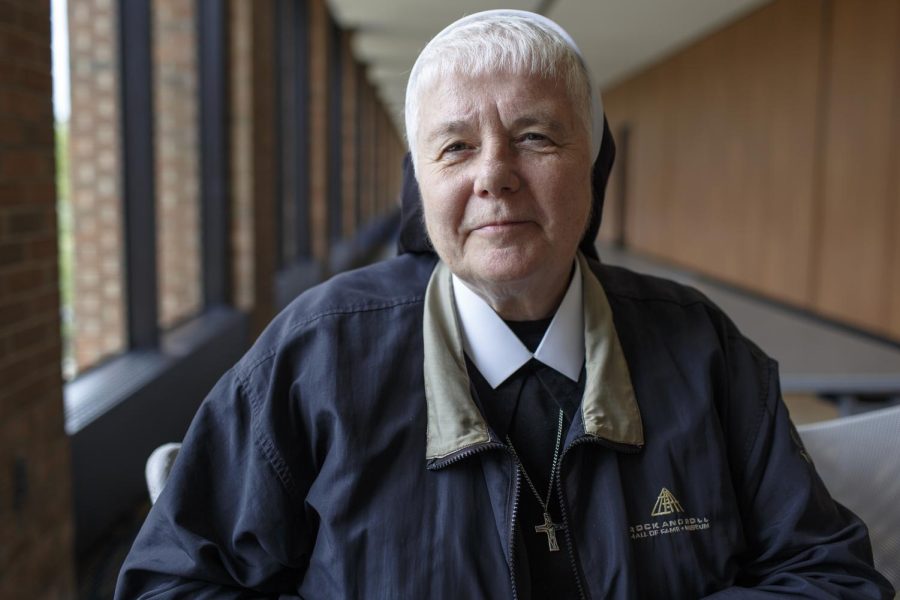 Sister Sharp, assistant professor of mathematics, poses for a portrait on the second floor of the Student Center on Wednesday, June 15, 2016.

Sister Mary Theresa Sharp is not your average nun. She travels, loves Elvis Presley and has four college degrees. She also currently teaches in the math department at Kent State.

A member of the Sisters of Notre Dame of Chardon, Sharp leads a life she describes as having a “theme of beauty.”

She said she sees beauty in everything from math to music.

“I think math’s beautiful,” Sharp said. “The organization of it, the things that can be discovered and the logic and application of it to things in the world.”

Sharp has taught at the Kent State main and Geauga campuses for 11 years. This fall she will teach Explorations in Modern Math and various basic algebra courses as an assistant professor.

While other instructors in the math department are interested in something called “pure mathematics,” Sharp is interested in what math has to do with the world.

“What I admire most is her ability to balance a sustained professional commitment to the university and its students with a commitment to her community of faith without compromising either in any way,” said Paul Gaston, a trustees professor in the English department at Kent State.

Gaston said he met Sharp while he was the university provost in 2005 and has always been impressed about her enthusiasm and dedication to her discipline.

High school was when she began to love math, as well as teaching.

Her favorite part was explaining problems and the solution path to help her peers understand more.

“I like making things that are not clear to people, clearer or more understandable. It gives me a good feeling,” Sharp said. “Plus, I think math is important in life—people need to know basic things in math for just living.”

Math isn’t the only thing she’s an expert in, though.

Over the years, Sharp has accumulated a bachelor’s in physics from Notre Dame College in Ohio, a master’s of science teaching degree in physics at John Carroll University, an associate of applied business computer technology degree at Kent State Geauga campus and a doctorate in mathematics education at Kent State.

She said she has a love for learning and that love is shared by her convent who she said firmly believes in educating as much as possible.

The Sisters of Notre Dame believe so strongly in education that for the last 55 years, Sharp said the sisters host an annual fundraiser in order to raise money for the continued education of the sisters.

Last year they raised more than $50,000 that went into a fund sisters can request money from for educational opportunities.

In the past, Sharp said she had requested funds to go to different math conferences across the nation as well as money to take an Italian class at Kent State over the summer.

“This is my first little dip into Italian,” Sharp said. “Language is hard for me—but it’s good that I have to be in this place and struggle and work hard to really get it because I feel some of my students go through that with math.”

When Sharp isn’t teaching or being taught herself, she enjoys reading, watching the History Channel, visiting with family and listening to music.

“To me math is very heady,” she said. “You’re just thinking with math, but … we’re not just a brain walking around—we have feelings, we have emotions—and music … gets me in touch with my feelings, and how to express them. I think that’s an important part of living as well.”

Sharp said her favorite musician is Presley because she feels no one has a voice like his. She’s even visited Graceland and The Heartbreak Hotel in Memphis, Tennessee—tourist hotspots for fans of the late singer.

Sharp also has a deep love for the Rock and Roll Hall of Fame that dates back to when it first opened in Cleveland in 1995 when she became a charter member.

“I joined because I felt that this place was going to do a lot for Cleveland,” Sharp said. “Some people donate tens of thousands of dollars to the Rock Hall but I give only what I can.”

Sharp shows off her love for the Rock Hall frequently by wearing a rock ‘n’ roll windbreaker jacket over her habit.

The jacket, she said, was given to her by Gladys Hulett, mother of Bill Hulett, CEO of the Rock Hall from 1995 until 1997.

Sharp said she met Gladys when she attended a 1996 luncheon in honor of Bill.

After she talked with Gladys at the event, the two began regularly visiting each other and going to mass together.

Sharp said she even attended the 1997 Rock and Roll Hall of Fame Induction—the first ever to be held in Cleveland—after Bill offered her a ticket one day when she was with Gladys.

The limited edition jacket, she said, was bought for her by Gladys on one of their many trips to the Rock Hall.

The Rock Hall, as well as many other buildings downtown, draws Sharp’s eye.

“Buildings just fascinate me, so the fact that we’ve had so many new buildings on this campus in the last few years has been interesting,” she said. “That new architecture building is such an amazing looking building.”

Sharp said that she loves architecture not only because of how nice it can look, but because it can connect back to math in everyday life.

“I’m attracted to beauty as I think many people are so I see beauty in buildings, beauty in the Rock Hall, in music and in math,” Sharp said. “I think beauty is a theme for my life.”