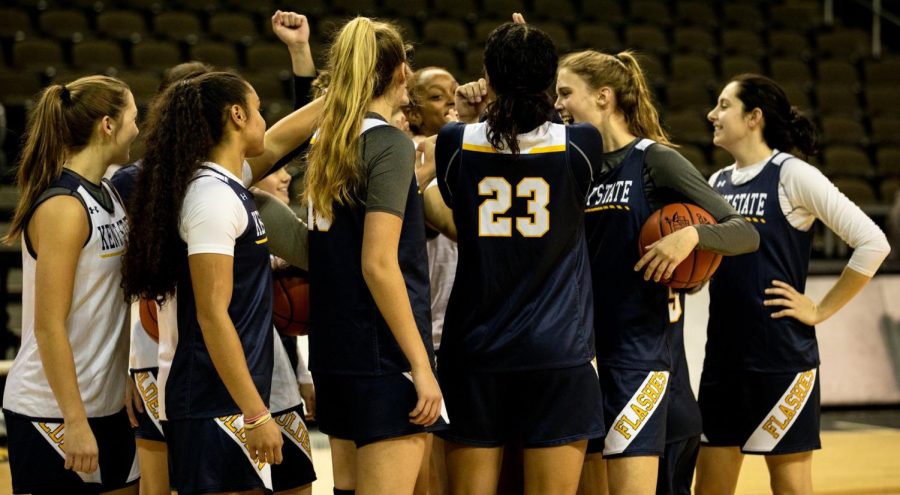 Members of the Kent State women's basketball team huddle up during a practice.

With just under a minute and half to play in the Kent State women’s basketball season opener, a Northern Kentucky player had stolen the ball and made a layup to make it a one-point game.

KSU went on to win 80-73, helped by Santoro’s dominant fourth quarter where she scored 12 points.

Santoro led the team with a career-high 19 points. She was a team-high 8-of-11 on free throws and went 5-of-9 from the field.

Coach Todd Starkey said that Santoro “played with a lot of composure.”

“We’ve seen a lot of growth from her,” Starkey said. “She had a phenomenal summer and fall. She did a really good job of attacking the basket and taking advantage of that. She took care of the basketball for a second-year freshman.”

And Santoro didn’t even start, she did all of that coming off of the bench in 24 minutes.

Senior point guard Mariah Modkins, who started all 20 games last season, struggled in her 17 minutes. She had 0 points and 0 rebounds with two turnovers.

The Flashes’ bench scored 34 points, including 16 in the fourth quarter. Northern Kentucky only had six points off the bench.

“The nice thing about this team is the balance,” Starkey said. “We’ve got a lot of different people that can step up and play well for us. You’re going to see the potential for more bench scoring this year because we have capable people that can really give us some great minutes and the ability to score.”

Senior Lindsey Thall finished with a team-high eight rebounds and was second on the team in points with 17. She had a .462 field goal percentage and led the team in blocks, with three, and in steals, with three.

KSU had four players reach double-digits in points, and each one of the seven players who scored had at least seven points.

“We have a lot of weapons,” Starkey said. “Today it was Casey and Lindsay. Next game it’s going to be someone else. It’s nice to have all these options.”

Kent State was down early in the first quarter after NKU got off to a 7-0 start. But two newcomers would help spark KSU’s offense.

Ogle hit two shots to pull the Flashes ahead 9-7.

Dunn finished with seven points and four rebounds in 17 minutes.

Ogle had eight points, and she tied team-highs in steals (3) and assists (3).

“I wouldn’t be surprised if she leads our team in steals,” Starkey said. “She just has a knack for that stuff. She’s a bit of a higher risk, higher reward type of player, it’s good to have that balance.”

Northern Kentucky edged out KSU in the first half, outscoring Kent State 24-19 in the second quarter and entering halftime with a 35-33 lead.

The Flashes committed 10 turnovers in the first half, and NKU scored 16 points off of those turnovers.

“Most of them were just kind of careless,” he said. “They were definitely preventable.”

Kent State would only commit four turnovers in the second half while forcing nine.

Starkey said that the team was much better defensively after halftime.

“We played great basketball in the first half for 15 minutes,” he said. “[For] five of it we looked brain dead. In the second half we had a couple lapses, but a lot more consistent play.

KSU came out of halftime hot, outscoring Northern Kentucky 23-16 in the third quarter.

“We were losing in points off of turnovers,” Starkey said. “[We were losing in] points in the pain and in second chance points in the first half. We turned that around and won all those categories in the second half, so much better. We played with more focus and energy, especially in the third quarter.”

The Flashes held a nine-point lead early in the fourth quarter before NKU went on the 11-3 run to pull within one.

Senior guard Hannah Young was third in points with 11. She had two blocks and six rebounds.

Starkey said that Young “had earned it.”

“She’s been playing with great effort and intensity,” Starkey said. “And she continued to do that today. It was nice to see her play well and benefit from all the hard work she’s put in over the last four years.

Young played 28 minutes, second on the team behind Thall, who was on the court for 37 minutes.

Kent State will next play its home opener against Saint Francis (PA.) Sunday at the M.A.C Center at 2 p.m.