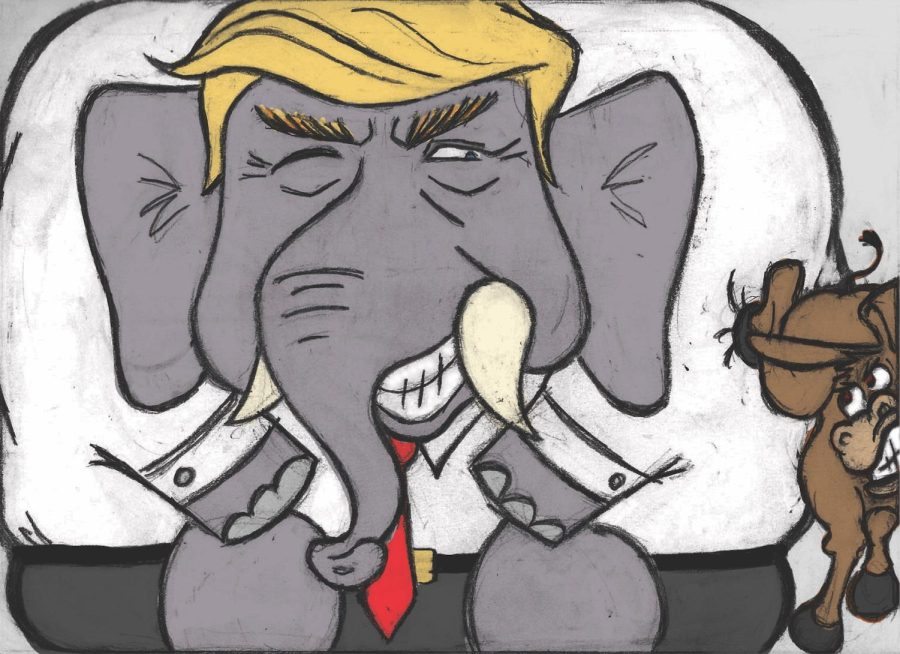 With this election year’s Republican National Convention in Cleveland, the political landscape is hitting closer to home than usual and has its host city bracing for an already unconventional, history-making four days.

From GOP leaders and lawmakers pushing to block the presumptive nominee, corporate sponsors and tech industry sponsors withdrawing or limiting support at the RNC—despite not directly providing reasoning for their decisions—to a growing list of prominent Republicans skipping the convention altogether, this GOP election season is already facing out-of-the-ordinary circumstances.

Businessman Donald Trump has made headlines by winning 1,542 of the 1,237 delegates needed to clinch the GOP nomination this past primary season.

But his success has come alongside unusual results and consequences in the world of politics.

Despite the fact that Trump received more votes than any other GOP candidate in history, his popularity has steadily decreased since the last primary at the beginning of June.

Support for Trump appears fractured. Some GOP lawmakers have pledged their support for the businessman, while others have managed to skirt around proper endorsement by vaguely claiming they will vote for the “eventual Republican nominee.”

Others—including Republican business executives and GOP leaders—have even gone so far as to say that, in lieu of supporting Trump and the Republican Party, they will choose in favor of former Secretary of State Hillary Clinton, the presumptive Democratic candidate.

Speaker of the House Paul Ryan publicly changed his opinion on the presumptive candidate after claiming that he was “not ready” to endorse him.

Less than a month after the statement, though, he wrote an opinion piece for his Wisconsin hometown newspaper that said  he will vote for Trump in the November election.

This announcement has been interpreted by the media to mean that Ryan has endorsed the businessman.

Interestingly, Ryan’s editorial includes no mention of an endorsement for Trump; he simply states that “I’ll be voting for him this fall.”

Of the more than 1,500 delegates awarded to Trump this past primary season, 1,447 are required to vote for him at the RNC. However, they may have the opportunity to deter from their original backings.

The “conscience clause” —typically used in the healthcare field—would allow for delegates at the convention to vote for an alternative candidate by claiming “reasons of conscious.”

This proposal would have to be supported by 25 percent of the 112-member RNC Rules Committee in order for it to be submitted as a minority report to the convention and receive a mandatory floor vote. Only then would it become an official rule.

Regardless of efforts to block Trump from the Republican Party nomination, the Cleveland convention will be witness to a historical event. But this isn’t the first time the Ohio town has played host to a political event.

Ohio has had a city hold the RNC three times in presidential history. The first, for the 1876 election, was in Cincinnati. Ohio Gov. Rutherford B. Hayes was the party’s nominee.

Cleveland itself has already hosted the RNC—in 1924 and 1936—both times in the city’s Public Auditorium.

The 1924 RNC was a history-making event: For the first time, women were given equal representation, thanks to the passing of the 19th Amendment in 1919.

Ninety-two years later, women have progressed from simply being afforded the opportunity to have a voice in the political world to holding office and—for the first time in U.S. history—becoming a major party’s presumptive presidential candidate.

Clinton’s political rise to power comes at a time when only 20 percent of both the nation’s House of Representatives and Senate are women.

Despite this obstacle, however, her past positions as secretary of state and senator of New York have provided her with the momentum to make a serious run for the presidency.

But at a time when Clinton should be holding the lone spotlight as the first woman to be running as the presumptive presidential candidate of a major political party, Trump has caused a “huge” enough stir to steal the majority of the limelight.

His unorthodox mannerisms and platform goals have sparked simultaneous support and controversy from political leaders of both major parties, as well as the nation’s citizens.

As more GOP leaders announce their decisions to opt out of the upcoming RNC, the list of potential speakers at the convention continues to grow smaller.

In response to these outcomes, Trump has been largely indifferent and self-assured.

“If there’s no endorsement, then I would not invite them to speak,” he stated in a June 26 New York Times article on the the possibility of former rivals Ohio Gov. John Kasich and Texas Sen. Ted Cruz addressing the convention.

Edited to add: On July 7, following a meeting with Trump, RNC Chairman Reince Priebus, Cruz announced he will be speaking at the RNC. However, Cruz has not endorsed Trump.

Though Trump has remained vocal in wanting the support of GOP leaders, he’s made it clear in what he believes will be the outcome of the RNC and—ultimately—the presidential election: “I can win one way or the other.”

Follow the Kent Stater staff on Twitter @kentwired and Snapchat (kentwired) for full coverage at the RNC July 18-21.

Alex Delaney-Gesing is the editor of The Kent Stater, contact her at [email protected]