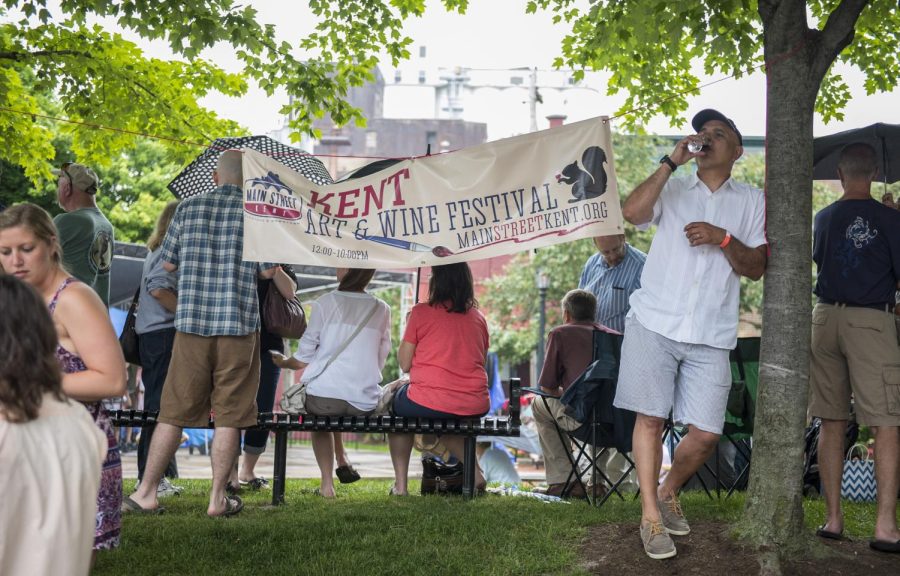 Downtown Kent has been transformed within the last few years. These improvements, coupled with the revitalization of Kent’s cultural scene, have sparked an interest from not just residents of the city, but from the neighboring areas as well.

The Main Street Art and Wine Festival has helped to showcase the unmistakeable energy of downtown Kent for the last 10 years. This year’s festival—which took place Saturday, from noon to 10 p.m.—served not only as a way for attendees to enjoy the city, but for local artists, vendors and wineries to showcase their crafts.

Though cloudy, the day of the festival drew large crowds of wine tasters, samplers and shoppers to the tent-lined streets. The  annual event was sponsored by a number of organizations, including Kent State Ashtabula regional campus’ wine degree program.

Beginning in fall 2011, the program has aimed to increase awareness of Ohio’s growing winery business and educate students on the basics of viticulture, growing the grapes, and enology, wine making.

“There are a lot of wineries in northeast Ohio, so it’s a program that we started to support the local economy,” said Lindsey Myers, manager of Communications and Marketing at Kent State Ashtabula.

Currently, the wine degree program is the only one of its kind in the state.

“(Wineries need)  a lot more trained, skilled, workers for those vineyards, so by creating this program, we’re helping to meet a local economic need as well,” Myers said.

One such local winery, Rootstown-based Barrel Run Crossing Winery and Vineyard, featured their products at the festival for the second consecutive year.

“We’re local to the area … and one of the few wineries in the region that do grow the majority of our own grapes right here in Ohio,” said Nicole Albano, Barrel Run Crossing’s event manager. “Everything is handmade, handpicked and hand-bottled, so it’s definitely a creation made from love.”

The winery initially began in 2006 on farmland owned by a four-generation family. Since then, 10 acres of vineyard reside on the farm, with eight varieties chosen specifically for the region and climate, according to the vineyard’s website.

“It’s really important for us to let people know that we’re out there,” Albano said. “It’s also important for people to know… there are hardworking farmers out there that are trying to produce really awesome wine.”

Along with their drink, festival attendees enjoyed food served by vendors such as the Brimfield Bread Oven, Popped! popcorn shop and Kent Cheesemonger, run and co-owned by Tim and Michelle Sahr.

“I think these types of events are definitely positives and … definitely make a difference for the community,” Sahr said.

“I had been working full time as a civil engineer for nineteen years and I just really wanted to do something different,” Sahr said. “We just kind of started knocking ideas around, and eventually… realized that the cheese thing would be a lot of fun.”

Wares from the Cheesemonger sold at the festival included $5 and $10 cheese boxes with an assortment of cheese.

“Everything that we carry in the shop is what we would consider artisan-level cheeses, and what that means is there’s just four ingredients in the cheese. So it’s milk, salt, rennet and an enzyme culture,” Sahr said. “I would like to think that everything that we have in our shop… is of exceptional quality.”

Support of local economics also extended to artists, such as musician Brent Kirby, who performed at the festival with his band, Brent Kirby and His Luck.

“I’m from Cleveland, the bay side of Cleveland … I’ve played in Kent many, many times, but there’s something about (the city), I think, that they really kind of embrace their arts … and embrace their music,” Kirby said. “And there’s a lot of really, really talented people down there,” Kirby said.

“You play in front of new people all the time when you play locally, too,” he said. “I think that’s the best thing about it—meeting new people and making new connections.”

His music has also been influenced by the area.

“There’s a certain mentality about Clevelanders, and northeast Ohio, for that fact,” Kirby said.” I think there’s a mentality of … ‘Hey, this is our home, we want to make it good.’ ”

Promoting the “home space” as Kirby referred to it, has become more common among the local talent, he said.

“This is where we’re growing our grass and we’re going to make it look good,” he said.

For musicians like Kirby, support for the arts is important.

“I think it’s important because there’s individuality in it,” he said. “Any time you have a culture that is encouraging of the creative space … that brings an individuality to an area, to a city, or a town.”

In an age of super-connectivity, sometimes simple face-to-face interaction can prove invaluable for members of the artistic community.

“I grew up going to the downtown area a lot,” Forman said. “I became a potter about three years ago, and that was actually one of the first shows I did. It’s always been just one of the most enjoyable shows to do—I just enjoy the community that’s there.”

“I focus on functional pottery… so I want to make things that are quality … functional and that will last for generations,” she said. “I like to bring a lot of modern, contemporary things to it—I do a lot of detailing … I’ve actually been firing the kiln all week to get ready.”

“I’ve been part of (the festival) for two years … this is actually the first festival that I was ever in,” he said.

Deighan’s art, which involves industrial, structured drawings in the medium of ink, was available for purchase in both print form and on shirts.

“It’s helped me get exposure for my work, mainly (because) I go to a lot of similar festivals,” Deighan said. “But … this festival pretty much made me decide to do what I do today …  It’s inspirational, it’s fun for the community, and you meet a lot of different people.”

After 10 years, the Art and Wine Festival has become a become a convergence of local culture for citizens of Kent and the surrounding areas.

“A lot of what is available right now is more commercial, or mass produced, but we still are drawn to the intimacy that there is in things that are created by hand, with love … with care and with great intention,” Forman said. “And that makes it fun …  exciting, and it makes it come alive.”