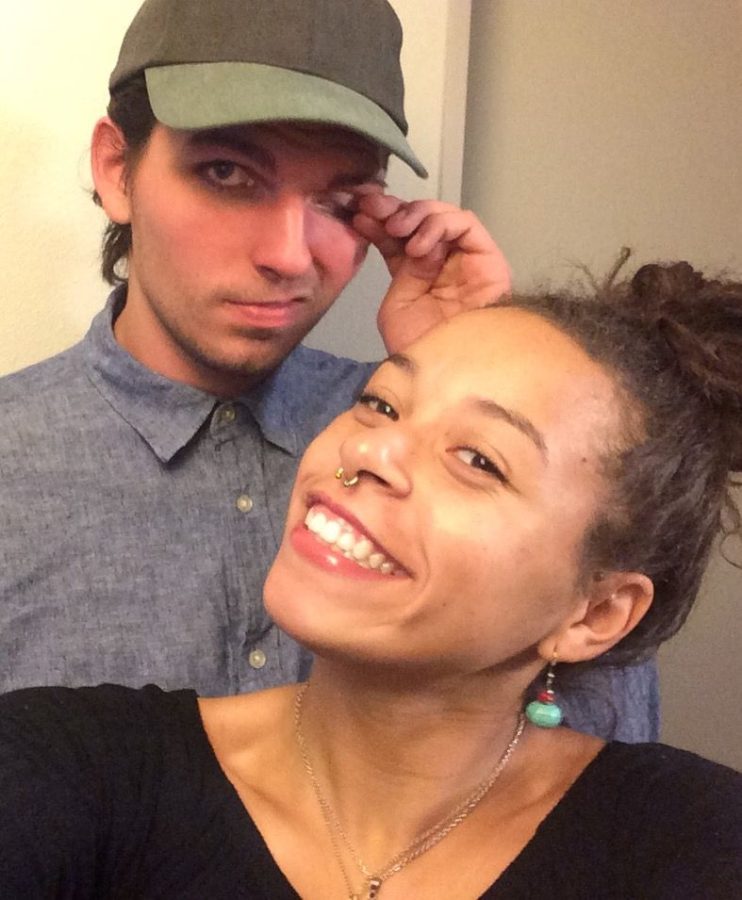 A recent Old Navy sales advertisement featuring an interracial family has sparked so many racist comments online, the company had to disable the comments feature.

In 2013, a record-high 12 percent of newlyweds married someone of a different race, according to a Pew Research Center analysis of census data.

Earlier this month, four interracial Kent State couples met with a Kent Stater reporter to talk about their relationships, the difficulties they face and racism in 21st Century America. Some get double takes, some receive comments, and all say that they don’t see race, just the other person.

Other people’s reactions can be more than a nuisance, said Shannon Christen-Syed and Idris Kabir Syed, both Kent State lecturers in the Department of Pan-African Studies. They’ve been together since 1999 and married since 2003.

Neither said they identify with a certain race, but Syed describes himself as “brown-skinned.”

“What I’ve noticed over the years is that people give him looks in restaurants,” Christen-Syed said. “To this day, we get, ‘Separate checks?’ because people assume we’re not a couple. It happens almost every time.”

On her race, Christen-Syed said, “I have issues because I don’t like to have to ‘check boxes’ and I think a lot of people don’t like that. Part of what we teach in our Black Experience courses is that we are all descendants of African people, so I have some trouble with that question.”

Christen-Syed said that you can’t control how other people view (your race).

“First and foremost, I am a human being,” Syed said. “I think that both Shannon and I look at race as a social construct, not as biological.”

The couple said that they are firm believers racism is not over in 2016, although they agree that it is a common and destructive misconception.

“We haven’t gotten over the social construct that is racism,” Syed said. “We are living in a time that has more interracial relationships than ever. Shannon and I can just walk down the street and hold hands and show some type of public display of affection. But it’s still taboo in many ways, and it’s still an issue.”

He said that all lives matter because all lives came from African lives.

“We teach this everyday,” Syed said.

Christen-Syed said that ignoring race is not a solution.

“(People say) ‘I don’t see race, I see people. First of all, if you’re going to say something like that, that’s antithetical, really,” Christen-Syed said. “If you have to say it, that’s BS—for lack of a scholarly term—because of course we see race. We see color, we see differences. It’s how we have been taught about these differences that becomes problematic.”

Sydney Green, a freshman communication studies major, is in an interracial relationship and also had a black and a white parent. Green has been seeing Tony Yandek, who is white, for about seven months.

“He says all of the time that he forgets that I’m black. We don’t look at each other and think, ‘Oh my god, look how white you are.’ Generally, it’s not something that we think about,” she said. “I think it’s funny when I do because I’ve been asked often if I like black guys or white guys. I usually go for white guys because I’m super suburban and grew up around a lot of white people. But I don’t think of him as a white person; he’s just a hot, sexy guy.”

Green had concerns about meeting Yandek’s family, but—according to both of them—his family welcomed her.

Some parents, Green said, wouldn’t be so understanding.

“I’ve had friends before who’ve blatantly told me ‘My parents aren’t racist, but if I ever brought home a black guy, it wouldn’t be cool,’ ” she said.

Green was raised in the suburbs and—although she identifies as black—realizes that being light-skinned has its advantages. She firmly believes that racism is still an issue in America.

“I mean I have a significant amount of white privilege being half white, being light skinned and being suburban,” she said. “We live in a super progressive place and we have a lot of friends who aren’t small-minded people … I don’t have to deal with it on a day-to-day basis but I don’t believe at all that racism is over.”

“(Racism is) getting better,” he said. “I don’t think it was typical for mixed relations in America until the last 50 years.”

In a similar situation is Sabrina Stephens, a freshman general business major, who is white and has been dating Charles Williams, who is black, for six months.

Stephens has support from the majority of her family and friends, but has been experiencing problems with some of her grandparents. This was especially the case when one wrote an insensitive comment on a picture of the interracial couple.

“Both sets of grandparents are divorced and remarried, so my dad’s dad does not know about my relationship yet. He’s very judgmental and old-schooled and I don’t want to start that conversation yet,” Stephens said. “My mom’s dad commented ‘nasty’ on my picture with Charles on Facebook.”

Stephens has no doubt that she and Williams will eventually marry, but said that certain comments from friends about potential children can be irritating.

Christen-Syed and Syed have an 8-year-old son.

Syed expressed concerns about the two going out when they’re not with Shannon because of how judgmental some strangers can be.

“When our son was born, he was much darker complexion than he has now. Now he’s really light-skinned,” Syed said. “When we’re out, people just assume he’s not my son. I’ve had to become aware and conscious of it. It makes me really nervous sometimes in public and cautious of his safety with me. Most people just assume it’s a friend’s kid, not my kid. But some of it is our perception, it’s not always clear.”

Being a white woman, Stephens said that she has never experienced racism, but knows that its existence is a problem in society.

“Even in my family, (racism) is still there,” she said. “It makes me so mad because he is such a good person and then, some people just go ‘oh, he’s black, so he’s a thug, and he’s no good.’ Well, actually, he wakes up every morning and goes to work for, eight, nine, 10 hours depending on the day. He’s really nice to me and that’s all that matters.”

According to a Pew Research Study, the majority of the American population seem to think that black/white relationships are more controversial than other races marrying each other. Of a similar mindset is Derek Meyer and Elaine Chen, who have been married for six years.

Meyer, an international relations major, is white, while Chen, a fashion merchandising major, is Chinese. The two met while Meyer was abroad in China teaching English. They said that while they have never experienced racism or odd comments, they are aware that other interracial couples might experience it.

Hana Barkowitz is a diversity reporter for The Kent Stater. Contact her at [email protected]