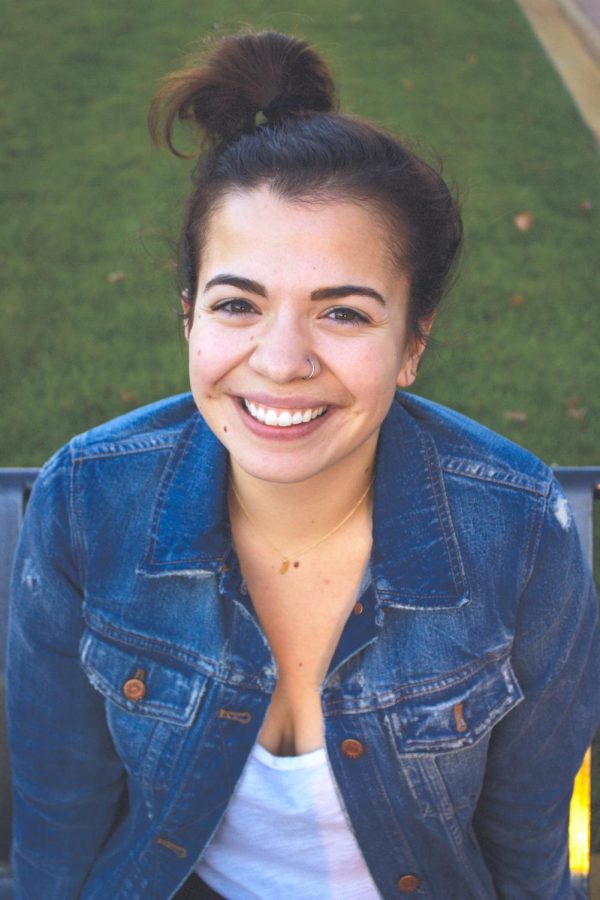 I was sitting in Reagan National Airport, waiting for a flight back home to Cleveland last spring when my phone buzzed. The screen read “Joshie”.

It takes a certain amount of mental preparation to open a text from your brother who says he hates you, so I sat there for a minute or two before I actually read it.

I closed my eyes, took a breath and looked. The text said he loved me and that he was going to jail.

I didn’t ask him why. I already knew the answer. Josh was addicted to heroin.

My name is Hannah, I’m a senior at Kent State and Josh is my little brother.

He’s three years younger than me but four years behind me in school.

Fifth grade was when it became a real nuisance to have a little brother. I was a big kid and he was a little one. Josh just wanted to hang out with his older sister, and I really enjoyed bossing him around so it worked out well. He would let me dress him up in tutus and dresses. We would put on shows. Naturally, they were written and directed by me. He would follow my lead wherever we went. But as we got older, that all changed.

Our parents got divorced when I started sixth grade. We moved across town to a smaller house and my mom got a job as a substitute teacher. She was sleeping on the couch because she didn’t have a bed and couldn’t afford a new one until she made some money. Our mom was sad, but at that age, we couldn’t see she was slipping into depression.

I quickly adjusted to life at my new school. My brother started at a charter school. He had trouble in public school because of his ADHD. He liked his new school, but he always needed a little extra help.

Josh wasn’t into organized sports. In my life, I’ve played nine different sports. My brother never played any. The year I quit cheerleading, I dove into the world of theater and was in five different plays. My brother would reluctantly attend performances and hated when I would sing show tunes in the house.

In high school, I was busy with (cheerleading), swimming, choir and honors and AP classes. My brother was put in special education, which he hated because of his learning disability.

I graduated when I was 17 years old and moved two weeks later to San Francisco for design school, leaving my brother behind with a mother whose depression was getting worse.

Despite being only two hours away, I didn’t go home much because I knew what was waiting for me — a depressed mother and an angry brother. Being the child of a depressed parent is hard. It’s hard to not blame yourself for how they are feeling. After all, she always called us her whole world. Did it mean we weren’t good enough?

We both had to live in constant fear her depression would swallow her whole. We had already come close to losing her, and that reality lived in our minds. I chased perfection to ensure I only had good news to tell her. Josh became angry, lashing out at me and my parents. He felt like my mom used up all of her love on me and there was nothing left for him. He had to face high school on his own.

The faster I moved forward in my life, the slower and more backward Josh moved in his.

His best friend, Kyle, died when Josh was 16. Kyle was riding his bike home from a youth meeting at our church and hit a rock. He flew over the handlebars and—even though he was wearing his helmet—hit the ground in just the right way. He was brain dead instantly.

I came home for a weekend trip when Josh was a junior in high school. Before he left for school, we got into an argument about how he talked to our mom.

That day, my brother didn’t come home and my mom started to worry. She is the worrier to end all worriers. I told her she should stop freaking out and just wait for him to come home. She didn’t listen. She knew something was wrong and drove around for more than an hour until she found him.

He was laying next to a cement bench passed out in front of a Food 4 Less. His friends left him there.

My mom called me in hysterics. “Your brother took something and he had a seizure. I’m taking him to the hospital.”

When I got to the hospital, I didn’t go in. I was scared he was going to die and by not going in, I could pretend it wasn’t happening. I sat in the car for two hours. It was then I realized my brother might have a problem.

My brother survived. He says he didn’t know what was mixed in with the pot he smoked. The tests they took at the hospital couldn’t figure it out either.

Another year passed and he managed to graduate high school. Barely, but he did graduate.

Later, the texts started. “Fuck you.” “You ruined my life.” “Selfish bitch.” “I hate you.” I learned later they only came after he asked my parents for money and they said no. He wanted to get high and since he didn’t have a job, he needed money from someone.

At first I tried to respond to the texts, but that only led to more fighting. So eventually, I just stopped replying.

Intellectually, I knew he didn’t mean it. He loved me even though he was never really good at showing it, but I knew he did.

While I was interning in D.C., I saw a Facebook post by my brother. It hinted he was arrested and would soon be going to jail. A quick look at the Monterey County Police crime log and I found out that my brother made a death threat and was found in possession of illegal weapons, including a set of brass knuckles.

He already had several misdemeanor charges on his record at that point, including theft.

It was hard to believe. The Josh I left behind was funny and loved practical jokes. He was my baby brother, and the baby brother I remembered would never have done that.

Trying to save himself

The most recent time he was in jail, I began to miss calls from an unfamiliar phone number. My dad told me my brother was trying to get in contact with me from jail.

I set up my account with the calling company so I could actually talk to him. I wasn’t sure what to expect when I finally picked up.

“I asked the judge to put me in,” he said. “I don’t want me to be the one in our family to die from this.” We have two cousins who overcame heroin addictions when we were younger.

Josh decided he needed to go to jail in order to detox.

About half way through our conversation, he broke down crying. He apologized to me for everything bad he said to me the past few years. He told me he loved me, and that he never stopped looking up to me.

After that first phone call, we talked to each other almost every day. If there was a day he didn’t call, I would worry. I spent most of my time worrying about him. Every thing I knew about jail was from movies or TV shows. I feared my brother would say the wrong thing to the wrong person and be killed. If my phone rang with the calling service’s number, I dropped everything to talk to him.

He is lucky. He passes as white, despite our Hispanic heritage—being a part of the Mexican group in jail means a lot more rules and a lot more violence.

I can’t remember a time in my adult life when my brother and I have been closer. We talked about my girlfriend and my time as the editor of The Kent Stater. He told me when he gets out he wants to be a journalist like me.

We spent a lot of time talking about books. One day we were talking about Katniss’ character progression in The Hunger Games. I started to cry. I’m not even really sure why I did. I think it’s because it was the first time I could remember my brother being passionate about anything in a long time, even if it was just about some stupid book.

My brother was released from jail after two months for good behavior. He still has to go back in, but since he is clean again the judge decided he could wait for his trial at home. For now, my brother is in limbo.

He can’t get a job because he never knows when he might have to meet with his lawyer or go to court. Josh can easily get into an inpatient program while he waits for his court date because my dad used to work for the city, but he doesn’t want to go.

Everyday he sits and waits for his sentence. A sentence that will determine how much of his twenties will be wasted because of decisions he made while high on heroin.

We haven’t talked since he was released from jail in February. I miss talking to him everyday, and I still worry about how he is doing.

The hardest part about loving someone with an addiction is the uncertainty. The only thing I know for sure is that whether or not I recognize the number, I’ll always pick up the call.

Hannah Armenta is a city reporter for the Kent Stater. Contact her at [email protected]