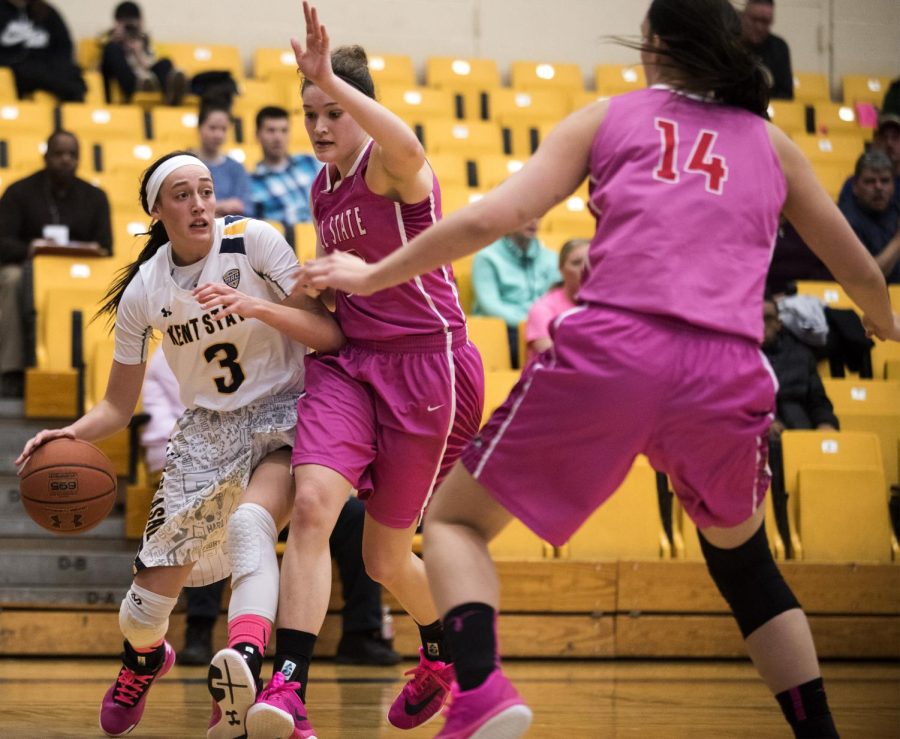 On any given day of clinicals, Kent State senior nursing major Larissa Lurken puts on a pair of scrubs. Outside of her academics, though, she can be seen on the basketball court as part of the university’s women’s basketball team, dressed in her typical attire of a jersey, pair of shorts and

Before clinicals, Kent State nursing students put on a pair of scrubs. Before games, student athletes put on their athletic gear and uniforms.

Larissa Lurken, a senior nursing major and guard on the Kent State women’s basketball team, wears both during a typical week.

Lurken, currently the only nursing student on the women’s basketball team, grew up in the West surrounded by nurses.

“My mom is a rehab nurse back where I live in Minnesota,” Lurken said. “My sister is also a nurse; I am kind of following in their footsteps.”

Lurken added that basketball has always been a large part of her life.

“I don’t even remember starting basketball because I was so young,” Lurken said. “My dad played (a little at) community college, my sister played and my whole family plays; basketball is in the family.”

During Lurken’s junior year of high school, college coaches began looking at her for their respective teams. Lurken described this recruitment process as a “whirlwind of emotions.”

“I was always nervous talking to college coaches,” Lurken said. “It was definitely an exciting feeling that people were contacting me.”

A recruiter from Kent State watched Lurken play at a basketball tournament. Prior to that tournament, Lurken had neither been to Ohio nor heard of Kent State. However, during the summer before her senior year, she decided Kent State was the school for her.

“I wanted to go far away,” Lurken said. “I had been around the same people my whole life and I wanted to experience what it would be like at other places. I came out here and fell in love with the campus.”

With an accredited nursing program and upper division standing, Kent State offered Lurken a place to pursue her goals.

“I had other offers at other places, but this was one of my only Division 1 offers (and) I knew I wanted to play Division 1,” Lurken said. “I also knew that Kent (State) had a good nursing program.”

As a basketball player at Kent State, Lurken broke her personal record—during high school she had scored 36 points for her team. On Jan. 27—when she broke her record—she led her team to victory against Northern Illinois University by putting up 37 points.

“I did not even realize (I scored 37 points),” Lurken said. “I did not notice until the very end of the game. Obviously, it felt pretty good to get it.”

In between the basketball practices and record-breaking games, Lurken focuses her time and energy on her nursing courses. For her clinicals, she goes to Akron General Hospital once a week for 12 hours at a time.

“Right now, I work with adults,” Lurken said. “It’s not my favorite. I like the experience, but I want to work with kids. Adults have a lot of different things going on and I learn a lot every single day.”

Lurken admits that the nursing coursework is stressful.

“Nursing is hard because there is so much information and it is hard to learn all of it,” Lurken said. “You learn every single system of the body in one semester. But there is so much (more to learn).”

Lurken said the most important part of balancing nursing and basketball is time management. She aims to coordinate her schedules so that both aspects of her life don’t interfere with the other.

“It is definitely hard to manage,” Lurken said. “The amount of studying that is required for nursing is so much and I also spend a lot of time here (at the MACC).”

Despite the hectic schedules—the clinical work and basketball practices—Lurken said she has never felt defeated.

“I would tell other nursing students to not stress so much,” Lurken said. “That will get you nowhere.”

Lauryn Rosinski is a health reporter for The Kent Stater. Contact her at [email protected]