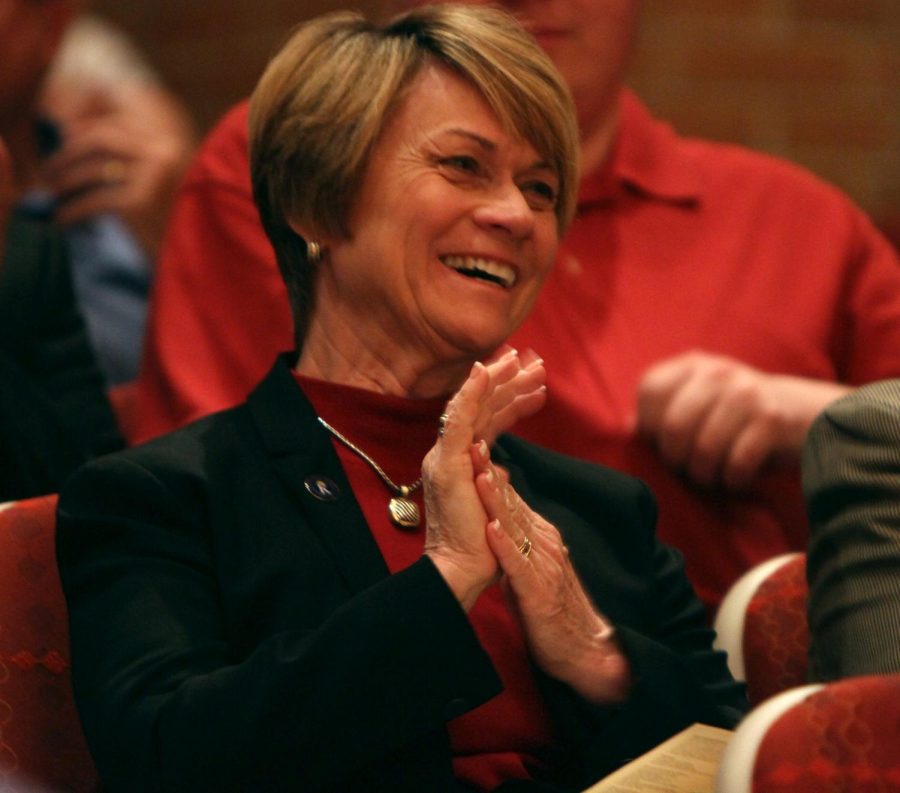 President Beverly Warren applauds after a performance at the Center for Performing Arts on April 24, 2016. This was President Warren's first public appearance since having surgery early this month.

In her first public appearance after announcing she was diagnosed with breast cancer earlier this month, Kent State President Beverly Warren watched her own work — a 24-stanza poem entitled “Praise Song for Kent State” — become a vocal and instrumental performance during Sunday’s “Singing Verse” event Sunday at the Carl F.W. Ludwig Recital Hall in the university’s Center for Performing Arts.

The event, co-sponsored by the Wick Poetry Center, the Kent State Fashion School and School of Music’s composition and voice studios, converted 15 mostly student-written poems into vocal performances and instrumentals.

Warren underwent surgery two weeks ago at the Cleveland Clinic as part of her ongoing treatment for breast cancer, but returned to campus to attend the event Sunday.

Warren acknowledged the “overwhelming” support, both online and in-person, she has received since her treatment started.

“It’s been very gratifying to see how many people have been so supportive and reached out to me over the last couple weeks,” Warren said. “I’m slowly coming back in. I don’t know that I can work my (12-hour days) right now, but I’m getting back into the swing of things.”

Perkins, the pianist who escorted Warren from the crowd to the stage, said he was honored to be part of the event.
“I hadn’t actually heard the poem before, so I had no idea what I was going to be working with, but there was a lot of excitement that went into that,” he said. “I was really glad she got to make it out and hear it.”

The poem was a response to another piece students in the writer’s club at Holden Elementary Club wrote for Warren, which they called “The Torch.” Both the initial poem and Warren’s response came just before the presidential inauguration last year. Warren recited her work there, but didn’t know it would be turned into a song for the Singing Verse event until two weeks ago. The piece mentions Kent State staples, including black squirrels, the rock on the front campus and a rising college town.

“I came up with the idea, wrote a little bit and bounced it off others (and) had people sort of come in and critique … so I would actually say it was kind of a group effort,” Warren said. “It took about six weeks from start to finish to … think of the emotion about what I wanted to say about being a part of this community.”

Heredos, who performed the song, said she was happy she could help bring Warren’s words to life.

“I talked to her afterward, and she really enjoyed the performance, I think,” she said. “I told her that since I’m graduating (in May) and because I have so many fond memories of Kent, I loved how her poem really captured some of the things that I felt in the five years that I’ve been here.”

Although Warren said she doesn’t typically write poetry, she does enjoy writing creatively, albeit she’s busier now more than ever. On a six-hour flight to California for an alumni event in January, she penned a poem for children in Florence, Italy, to celebrate the campus abroad. That poem addressed the prompt, “Where I’m from.” She read her work to elementary students in Florence via Skype.

As for her “Praise” poem, she’s not sure if it will be further developed and used again in the future. The work, the final performance at Sunday’s event, resulted in the loudest applause of the evening.

The last two lines of the poem read, “Praise song for the path we will travel tomorrow, arms linked, minds open, hearts full,”; words that are now indicative of the support Warren has received and will continue to receive in the future.

“I don’t know what’s next for my poem because there’s so much to be thankful for,” Warren said. “I just really miss being back in the thick of things and being with the students, so I’m trying to bounce back.”

Jimmy Miller is the managing editor of The Kent Stater. Contact him at [email protected]