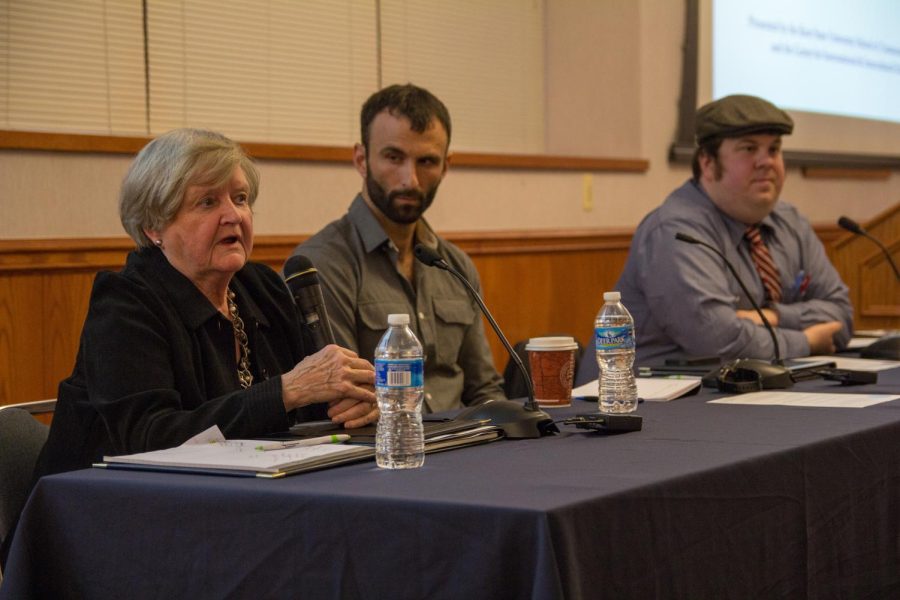 The School of Communication Studies and The Center for International and Intercultural Education hosted its Spring Global Issues Forum “Human Trafficking: A Global and Local Epidemic” Wednesday night in the Moulton Hall Ballroom, with about 30 students and faculty in attendance.

“I’ve learned that the US Congress passed the Trafficking Victims’ Protection Act in the year 2000, and that the United Nations had identified human trafficking as the fastest growing criminal activity in the world, and today it is a multibillion dollar business,” said Kathleen Chandler, a member of the Board of County Commissioners.

Eric Heisig, a federal courts reporter, and Jason Motlagh, a freelance journalist from the Pulitzer Center for Crisis Reporting, sat alongside Chandler. Heisig talked about his experience covering a human trafficking ring that brought young Guatemalans to the United States and forced them to work on egg farms in Central Ohio. Motlagh talked about his experience in Thailand and the forced labor in the seafood industry there.

“In Toledo, a lot of the girls who had been trafficked, thought they had a boyfriend, someone that would treat them well, take care of them, buy them things,” Chandler said. “This would go on for a few weeks, where they would groom them, and then they would take them out of town and they would be raped or gang raped and beaten.”

Chandler went on to say that the traffickers would prey on runaways, vulnerable girls, which they could take advantage of and threaten them if they were to leave. Heisig echoed these sentiments and added that a lot of victims are scared to come forward because they fear law enforcement.

“It’s (escaping) a fear of their captors or their pimps or their boss, and it’s a fear of law enforcement,” Heisig said. “In the case of the Guatemalans, they were brought over illegally, and there is a fear of deportation.”

On the opposite side of the spectrum, Motlagh talked about forced labor in Thailand, Burma and Bangladesh.

One-third of the seafood brought into the United States comes from Thailand, and Motlagh said a lot of the people working on those fishing boats are trafficked. He told the story of a 14 year-old girl who had scratches all over her arms from peeling the shrimp and working in the industry.

When asked if the people who are trading with such companies know of what’s going. Motlagh said they are aware and it’s a “willful ignorance.”

“We can’t be ignorant anymore, we have to be aware,” Motlagh said.

“It’s a lot bigger than you think in the U.S., and to talk about it here in Cleveland is strange, and it’s scary,” Coppin said.

“I think the most important thing is to be educated about it, talk to your friends about it, and do whatever we can to spread the word that this is going on,” Chandler responded.

Motlagh agreed and added that we, as consumers, need to understand where products come from.

“I hope our extreme examples from overseas helped provoke people to think a little more carefully about the decisions they’re making on a daily basis,” Motlagh said. “There’s an underbelly to a lot of these products we rely on every day, and it’s important that people remember that if they’re not paying very much for these products, that someone at the far end is.”

To watch a video of the discussion visit the following link: https://www.youtube.com/watch?v=NdQac5kJQa0

Latisha Ellison is the CCI reporter for The Kent Stater, contact her at [email protected]