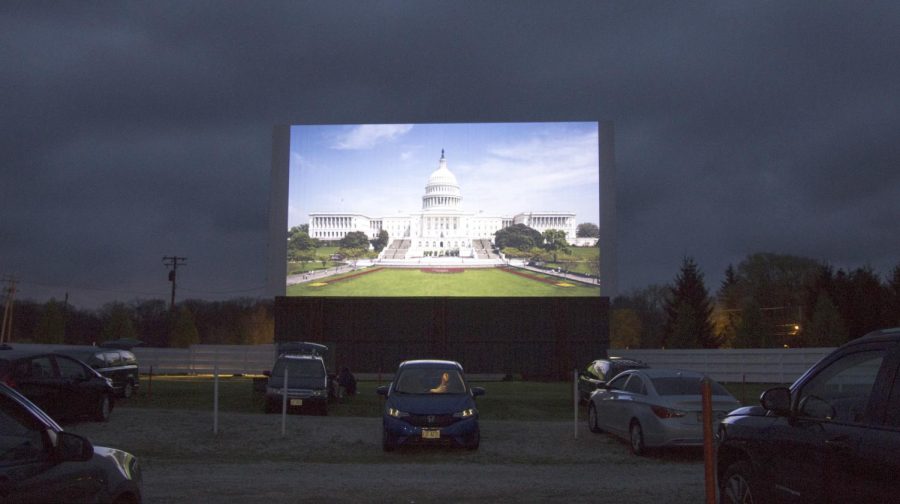 A woman sits in her car while the national anthem plays on the screen at the Midway Drive In on Friday April 29, 2016. While drive ins may seem like a thing of the past, those still open are thriving.

For many Kent State students driving east on State Route 59, the road seems to end at Walmart. In their minds, they need not travel any further toward Ravenna to satisfy their living needs—they can get their ramen, detergent and party materials all in one store.

However, students who continue a few seconds past Walmart can discover a potential solution for their entertainment needs.

The Midway Twin Drive-In dusted off its projectors and opened its box office for the season last month. The outdoor theater, around since 1949, has adapted to the changing landscape of cinema through the years, allowing it to succeed while many drive-ins across the country disappear.

Michael Marxen, general manager of Midway Twin and Chardon’s Mayfield Road Drive-In, began his career in drive-in operations right out of high school. He has seen the evolution of the industry first-hand.

“It’s a testament to the customer base because without them, we wouldn’t be here,” Marxen said.

Midway Twin sports two jumbo screens that each display a double-feature of newly-released blockbusters once the sun goes down.

Part of the allure of the drive-in theater is watching a movie under the stars—it’s when those stars become replaced with rain clouds that it becomes an issue – especially with Ohio’s unpredictable forecasts.

“Weather can definitely be a problem,” said Ed Eckhardt, manager of the drive-in. “Unfortunately, that’s something out of our control.”

The first drive-in theatre opened in 1933 in Camden, New Jersey, and charged 25 cents per car and per person. The trend became an American icon, peaking in the ’50s with nearly 5,000 locations across the country.

Today, less than 400 drive-in theatres remain in the U.S.

Though relying on natural darkness limits the number of screening possible per day compared to traditional movie theaters, it wasn’t until recently that business really took a hit for drive-ins. In 2013, movie studios required theaters to convert from film to digital projections. This costly upgrade (upward of $50,000 per screen in some cases) forced many sites to go belly-up.

Midway Twin opted for the makeover.

“Our owner made a big investment to keep up with modern technology,” Eckhardt said. “It was worth it because now it’s a much brighter, crisper image.”

With its investment in the future, Midway Twin is taking several measures to guarantee it earns customers’ $20 per carload. One of those measures includes the installation of a stage where local bands can perform before the movie.

“We compete so heavily for people’s free time and entertainment dollar,” Marxen said. “We try to give customers more value for their buck.”

Competition is only increasing as the city of Ravenna moves forward with plans to construct a brand new movie theater. With Kent Plaza Theater in the other direction, Midway Twin will eventually find itself between two local theaters.

Eckhardt and Marxen are confident that the uniqueness of the drive-in theater will keep them afloat.

“I don’t think it’s going to interfere with us,” Eckhardt said. “We’re a very different breed; the experience is completely different.”

“You go to an indoor theater just to watch a movie,” Marxen said. “When you come here, you’re planning an event.”

“I couldn’t even tell you how many times I’ve been there,” Paulus said. “It’s been something my family and friends look forward to every summer.”

Although Midway Twin prides itself on being a family-oriented attraction, it’s no stranger to the more mature fare as well. The managers ensure students that the road, indeed, does not end at Walmart.

“We’re a great value for students too,” Marxen said. “We really cater to all ages.”

Benjamin VanHoose is an entertainment reporter for the Kent Stater. Contact him at [email protected]