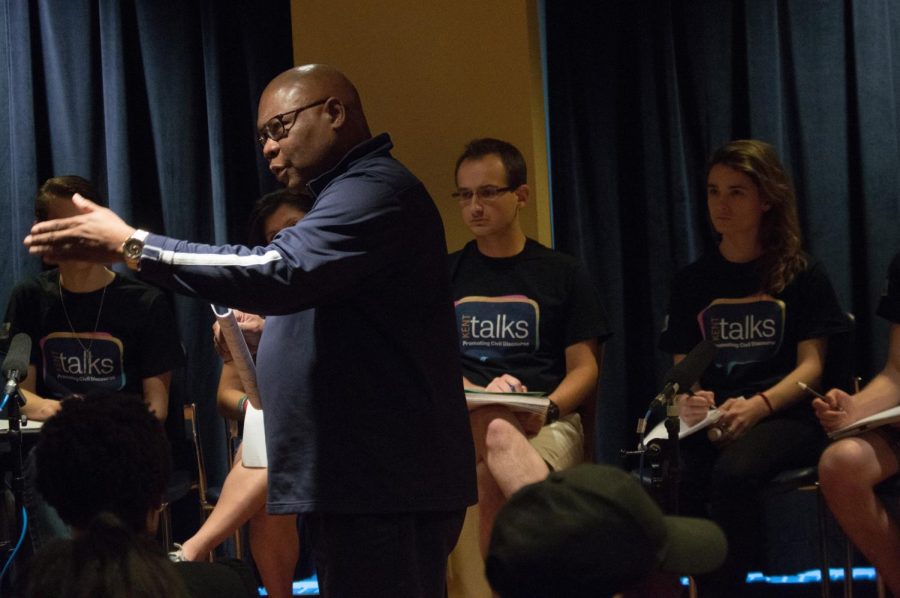 Kelvin Berry, moderator for the Kent Talks event, addresses a question asked by a member of the audience Monday, April 18, 2016.

“It (Kent Talks) was formed to create a platform that might be about the platform of civil discourse,” said Kelvin Berry, director of economic development and community relations. “Civil discourse simply put is this: That is to promote a conversation about the things that are uncomfortable or maybe we all don’t agree on so we can listen to each other, listen to another perspective and some point in time, create change.”

This session of Kent Talks served as a forum for SDAC to introduce themselves and listen to the concerns of students. It was also streamed to Kent State’s regional campuses to include all students in the conversation.

The board is made up of 11 students divided into three committees: Outreach, reports, and communication. SDAC was created to be the voice for students to voice their concerns to administration about the climate on campus.

Conversation began slow, but quickly took off during a Q&A session led by Berry.

Students brought up concerns of cultural appropriation, faculty sensitivity, student ignorance, openness to learn about each other’s differences and many other topics.

“I think people were very honest about coming out and talking about the problems that they’ve had on campus,” said Matthew Chernesky, leader of the SDAC board. “I think that by sharing their stories, we were able to have a constructive dialogue about the changes that we can make on this campus.”

The crowd, composed of undergraduate and graduate students, shared stories of what made them uncomfortable while the SDAC board took notes in preparation to create initiatives. Since it is a newly formed organization, plans will not be complete until the fall semester.

“I loved seeing the different perspectives of the students because it wasn’t just one voice,” Beatrice Cahill-Camden, a SDAC board member, said. “I think I am used to hearing a particular group of students, whether it’s people in my gender or my race.”

Cahill-Camden felt tonight was beneficial because, “people came out from all different parts of campus who are different in what they study and what is important to them.”

After the session, SDAC board members agreed that they are confident and excited about the future, but there is a lot of work to be done.

“I felt empowered by tonight,” Chernesky said. “I think that it has given us a lot of great ideas about policy implementations or recommendations that we can make, so I am very confident that all of the stories we heard will be able to be used in the future conversations that SDAC has.”

Stephanie Martoccia is a diversity reporter for The Kent Stater. Contact her at [email protected]