Learning at all ages: Continuing education at age 73 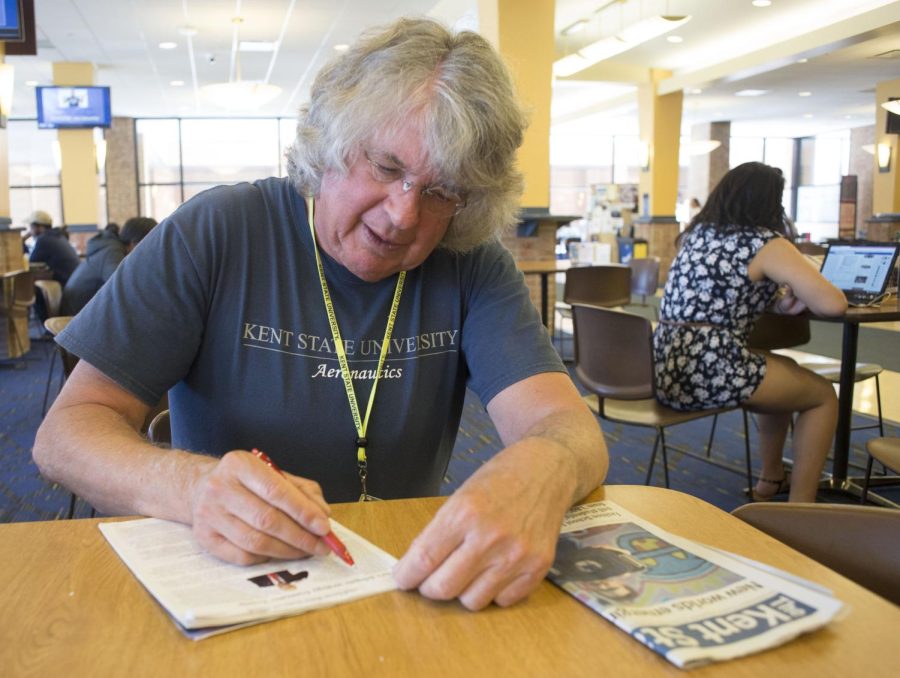 Calvin Carstensen, a 73-year-old student, sits in the Student Center on Monday, April 18, 2016. Calvin has been taking courses consistently every year as a guest/senior student since 2000, which is over 30 semesters.

Calvin Carstensen sits inside The Hub of the Kent State Student Center skimming through the latest issue of TIME Magazine.

At 73, with a birthday coming up, Carstensen is enrolled in the Senior Guest Program at Kent State, which allows Ohio residents 60 years and older to attend regular classes on a tuition-free basis.

Despite the fact he lives alone, Carstensen said that he wouldn’t change anything with his life.

“I’m happy with how things are,” Carstensen said.

He became interested in the senior program during his time in graduate school, when he became involved in community education. After retiring in 2000, he decided to come back to school.

“I’ve been in this ever since, and it’s been great,” he said.

In Fall 2013, Carstensen enrolled in The History of Costume taught by Catherine Leslie, an associate professor of fashion merchandising.

He enjoyed the course, so he signed up for Leslie’s Fashion Fundamentals course. Leslie said the personal interest he took in her was a welcome surprise from usual student behavior.

Leslie said Carstensen was a model student, always arriving early and sitting in the front row. He frequently contributed and opened up the floor for class discussion.

“Sometimes he would share with the class his observations,” Leslie said. “I thought that was really cool, from a teaching standpoint.”

She said Carstensen is skilled at connecting different people in his life, with him introducing her to a number of people in the community.

“We get caught in our own bubbles, and he is like a bridge,” she said.

Carstensen has been involved with the aeronautics program at Kent State, coaching the flight team for four years. He is now a judge for the National Intercollegiate Flying Association.

“There’s no one who ever began flight training after age 65; they never made it to full licensure, but you’re looking at him,” he said.

Ben Satyshur, aviation safety program manager at Kent State, said he met Carstensen in 2008 and that Carstensen has been very involved with the program — even after he quit coaching the flight team.

“All of the girls and guys think of him as a part of the team,” Satyshur said.

Satsyshur said Carstensen is very intelligent and always focuses on giving back to the program, even purchasing the flagship plane for the aeronautics program.

While he has been actively involved in the academic world, when he was younger, Carstensen struggled throughout grade school and high school with his grades — caused in large part by his dyslexia.

“Through my teenage years … I was well below average,” he said.

In college, he said he did not perform well, but ultimately attended West Virginia Wesleyan College. He chose to major in physics, largely so that he would not have to read much.

“I thought that would minimize my need to read, and I didn’t do very well, ” he said.

Carstensen enrolled in the Evelyn Wood School of Reading Dynamics, an online speed-reading program, and learned how to read properly using his hands.

During his time in graduate school at the University of Bridgeport in Connecticut, he learned German. After graduating, he decided to teach physics in Germany.

“All the physics I ever taught was stuff I learned on my own,” Carstensen said. “My degree was worthless.”

Carstensen said he wants to continue taking classes as a senior guest as long as he’s able and has already scheduled his classes for this fall.

“I’m really happy doing this, and I have no plans to be stopping,” he said.

Olivia Minnier is an administration reporter for The Kent Stater. Contact her at [email protected]