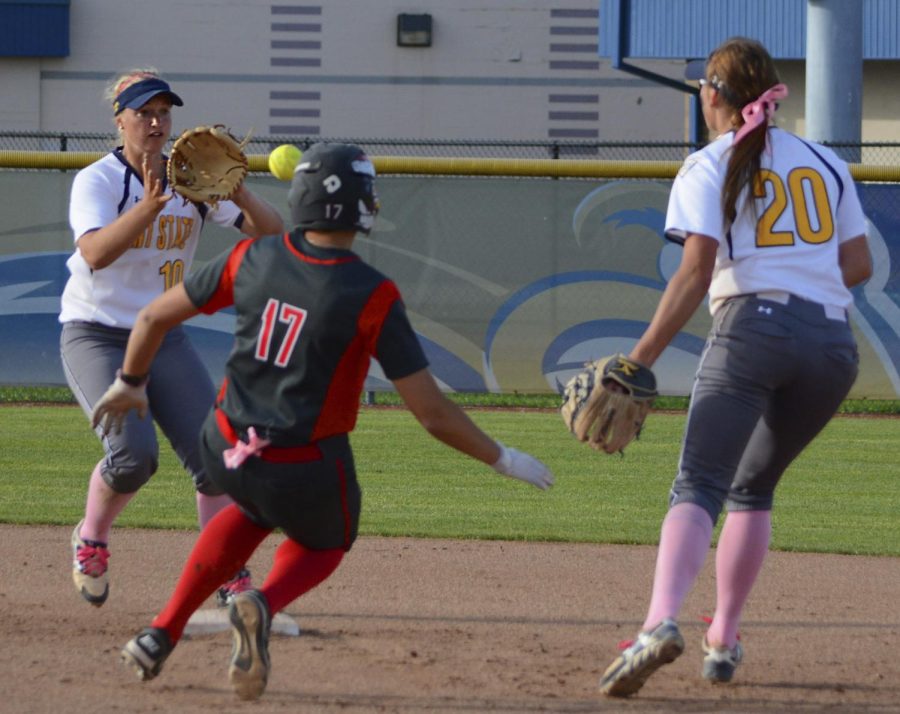 Then a sophomore, infielder Holly Spears catches a ball tossed by former Kent State infielder Michele Duffy in a rundown with a Youngstown State player on April 25, 2017. [FILE]

After turning a double play to retire the Youngstown State University Penguins in the top of the third, the Kent State softball team huddled in front of its dugout at the Diamond at Dix and chanted, “turn up.”

Trailing 1-0, the Flashes were in need of offensive production and, more importantly, a victory after dropping the first game of Wednesday’s doubleheader on a senior Miranda Castiglione game-winning grand slam in the seventh.

But Kent State didn’t “turn up” that inning. Or the following.

Rather, the Flashes “turned up” in short spurts, extending at bats, capitalizing on YSU fielding errors and scoring runs on sacrifice flies and bloop base hits in the fifth and sixth innings.

“They’re a team that battles, which is good. That’s a good test for us because, as we go through the rest of the MAC season, there can be some ups and downs and we’re going to have to bounce back,” interim head coach Eric Oakley said. “It shows a lot of character and I’m proud of them for bouncing back in game two.”

Kent State was able to collect hits against YSU right-hander junior Caitlyn Minney in the first four innings, but struggled to advance runners into scoring position, stranding six players on base during that stretch.

The bottom of the fifth, though, was a turning point. Pitcher sophomore Emily Dobbin began the inning with a single and senior Arika Roush’s sacrifice bunt moved her to second.

After getting down in the count, 0-2, Speers managed to foul off three pitches to extend the at-bat, drove a pitch the opposite way to score Duffy on the sac fly.

“I felt that Holly was going to get a good shot there and unfortunately came up just a little short at the fence. She’s a great two strike hitter,” Oakley said of his shortstop. “I never worry when Holly has two strikes. The more you battle, the better chance you have as a batter, no question.”

The Flashes added to their lead in the following frame. With two outs, Youngstown State centerfielder senior Jordan Macey dropped a routine fly ball off the bat of freshman Hunter Brancifort and freshman Bailey Brownfield’s grounder to short was bobbled by senior Katie Smallcomb.

Roush, the next batter, drove a 3-2 pitch to center, scoring and Duffy’s single to right enabled Dobbins to come home.

“Our players are very smart on the bases. A little bit more speed with that smartness definitely helps getting the extra runs,” Oakley said. “And we did, we ran the bases well today and that paid off.”

Pitcher junior Ronnie Ladines brought into the game in a save situation in the top of the seventh, surrendered one run with two outs after junior Brittney Moffatt doubled to left-center, but she got the next batter, sophomore Stevie Taylor, to pop-up to Speers, ending the game.

Kent State begins a five game road swing Friday against Bowling Green before traveling to Columbus to take on Ohio State next Wednesday.