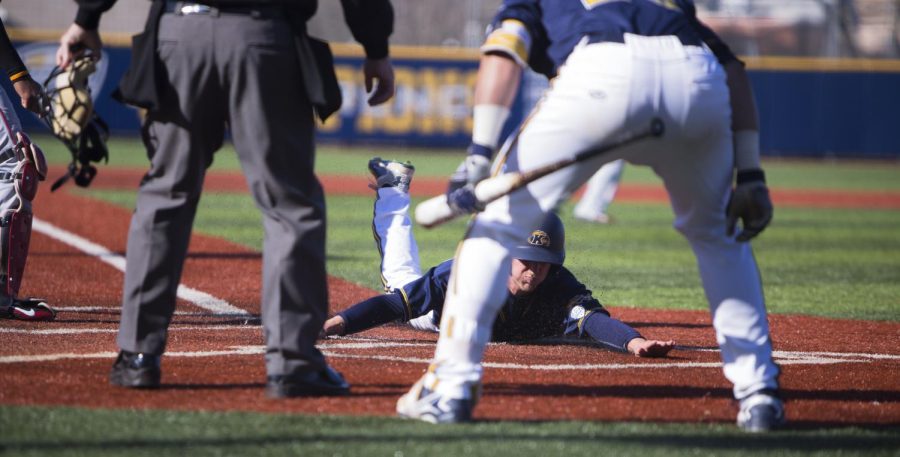 Junior Sam Hurt slides into home following redshirt junior Luke Burch in the third inning of the game against The Ohio State University on Tuesday, April 5, 2016.

Scoring runs plus great starting pitching is a great formula for winning most baseball teams around the nation and that was no different Tuesday for the Kent State Flashes.

In their first of five home games in six days the Flashes welcomed in the 19-7-1 Ohio State Buckeyes who came into the game with the third highest winning percentage in the Big Ten.

But only in baseball will the MAC out-do the Big Ten, and the Flashes proved that with the help of yet another stellar start from freshman Connor Wollersheim.

Wollersheim has come into his own lately dominating the latter part of March and keeping it going now as the calendar flips to a cold and wet April.

The left-hander from Neenah, Wisconsin dazzled Buckeye batters, striking out four and allowing only three hits over the span of five and two-thirds scoreless innings.

With Wollersheim’s win over the Buckeyes, Connor now holds the third lowest ERA for a Kent State starter this season while allowing the lowest amount of hits among those who have started five or more games with 24.

After back-to-back starts of less than four innings each against Milwaukee and Pittsburgh it may have seemed that Wollersheim still had some work to do at the college level giving up a total of six runs in exactly six innings.

The last three starts have been phenomenal for the young arm as Wollersheim has only allowed one earned run over a span of 16.2 innings while going at least five innings in every start, serving big help to a heavily-worked bullpen.

With Tuesday being Wollersheim’s second straight win at home, Connor may want to get comfortable toeing only the Kent State rubber with it looking like his next two starts will also come at Schoonover Stadium.

The ease of Tuesday’s performance by Wollersheim was only helped by the Flashes ability to score seven runs in the first three innings giving their starter much breathing room to work with.

As always it was a different guy leading the Flashes to their 20th victory of the season, Tuesday’s hit leader was right-fielder Luke Burch who had his second straight three-hit ballgame, and third multi-hit game in the last four.

This four-game stretch by Burch has taken his .287 average and raised it to a phenomenal .321.

The Flashes will be at home for four more games with tomorrow’s one game match-up coming against Canisus College (12-15) and then a weekend series against the Toledo Rockets (5-23-1).

Zach Harley is a sports reporter for The Kent Stater. Contact him at [email protected]