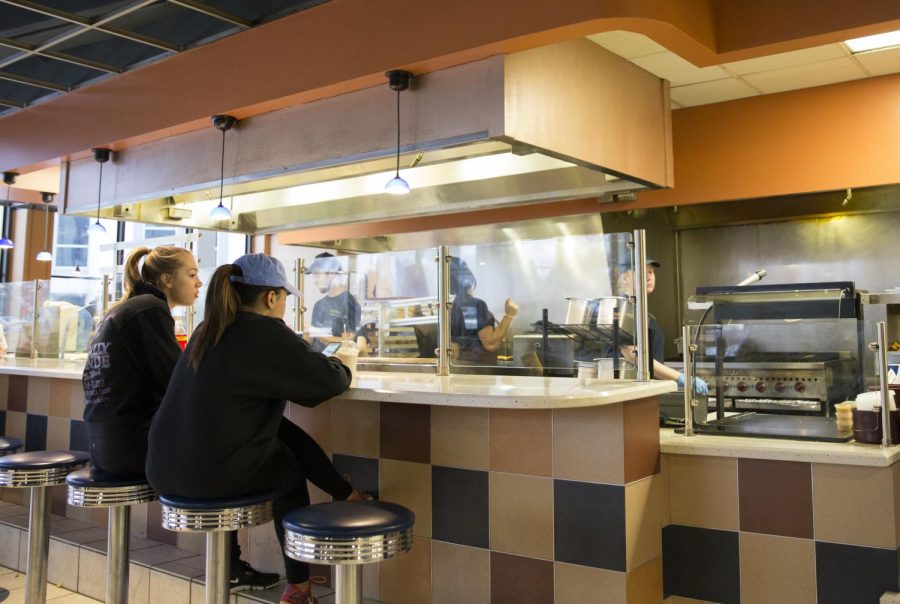 Students sit at the counter of Rosie’s Diner and Market in the Tri-Towers Rotunda on Sunday, April 10, 2016.

Rosie’s Diner and Market is temporarily discontinuing its delivery services due to its delivery van having mechanical issues.

According to Richard Roland, director of University Dining Services at Kent State, the van’s return could vary greatly while it’s in repair.

“It could honestly be only a couple of days or even a couple of weeks until the van returns,” Roland said, “Aside from that we also have to update the servers so that we can have more Rosie employees who are able to make deliveries.”

Roland added that although maintenance of their other vehicles contributed to the decision, students can still call Rosie’s and make a pick-up order.

According to Rosie’s web page, delivery service primarily runs from 6 p.m. to 2 a.m., where foods such as pizza and submarine sandwiches are typically delivered.

Keely Geise, a senior integrated language arts major and employee of Rosie’s, said the servers that list who are able to make deliveries is somewhat dated. She said she is curious to see what happens to the employees who work specifically with delivery.

“I know we have a good amount of people who work on pizza, which is primarily what we deliver aside from chips and drinks.” Geise said, adding that although the delivery menu has been getting smaller, people still order delivery from Rosie’s.

Currently, Rosie’s is the only Kent State Dining Service establishment that delivers. This can leave students who depend on its delivery service at an inconvenience. Roland has said that the management at Rosie’s is doing everything within its influence to resume delivery.

Lauren Anderson, a junior teaching english as a second language major, feels that this announcement could hurt Rosie’s reputation because she thinks that it’s one of the more popular dining halls at Kent State.

“Although I’ve never personally ordered delivery, it sucks for those who actually have,” Anderson said.

Angelo Angel is an entertainment reporter for The Kent Stater. Contact him at [email protected]