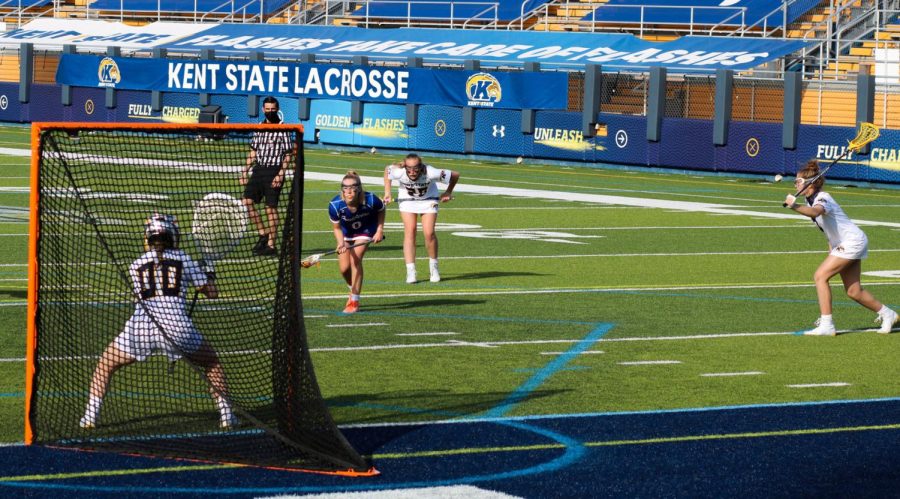 Monday the Flashes scored 21, tying a school record in their 21-12 win over Presbyterian College.

Kent State had never taken more than 30 shots this season. On Monday they blew past that number with 43 shots, a school record.

The Flashes had never taken more than 21 shots on goal. Monday they took 35, another school record.

It was one of the team’s best offensive performances in its three-year history.

“We’ve been doing some things in practices that haven’t translated to the game yet,” coach Brianne Tierney said. “It’s finally translated. We had been waiting for that turning point.”

Junior midfielder Madison Rapier said the win was the high point of the season so far.

“The win against Akron was great but we only beat them by one point,” Rapier said. “In the second half we started playing better and were connecting so well. Today was just fun. We all knew we had each other’s backs, and that gets everyone’s energy up. Everyone was so excited. It was the best feeling.”

Rapier led the team in goals with five. She also had a team-leading seven draw controls.

“She has a natural ability to win the draw control,” Tierney said. “And she has so much confidence carrying the ball. She was unbelievable today, and she’s one of the best players I’ve ever coached.”

The Flashes led 6-5 after a back-and-forth first half. But in the first 15 minutes of the second half, KSU poured on eight goals, then after a rally by Presbyterian cut the lead to 16-11, the Flashes scored five more.

“We started to see the weak spots of their defense,” she said. “Once we saw that we started getting great passes and drives. People started connecting so much better once we figured out what worked for us.”

Rapier said the team also caught on to Presbyterian’s offense.

Tierney said that her players worried less about being taken out of the game because of a mistake and became more focused.

“They were sharing the ball and passing a lot better,” she said. “With so many players coming in and out they couldn’t worry about the stakes, they just needed to make one good thing happen. They were less selfish. We started to tire them out a bit, and using a lot of different players worked to our advantage.”

Kent State had struggled with draw controls this season, not winning the draw battle in any game this year. But Monday the Flashes beat Presbyterian at the draw 21-14. That was good for eight more total controls than in any other game this season.

Rapier said the team had a new mentality on draw controls.

“We decided that we have nothing to lose there,” she said. “Just go for the ball. Do anything possible to get the ball. That helped stop the overthinking we had about where the ball’s going to or what move we’ll make next.”

Freshman goalkeeper Taylor Monturo played the majority of the game between the pipes, making seven saves and allowing seven goals.

The Flashes next play at Youngstown State University on Sunday. The Penguins are 1-2 and tied for fourth in the MAC.

This season is YSU’s first with a women’s lacrosse team.

“They’re a brand new team, but so were we two years ago,” Rapier said. “So we know not to underestimate them. It’s going to be a fun game.”

Jimmy Oswald is a sports reporter. Contact him at [email protected]