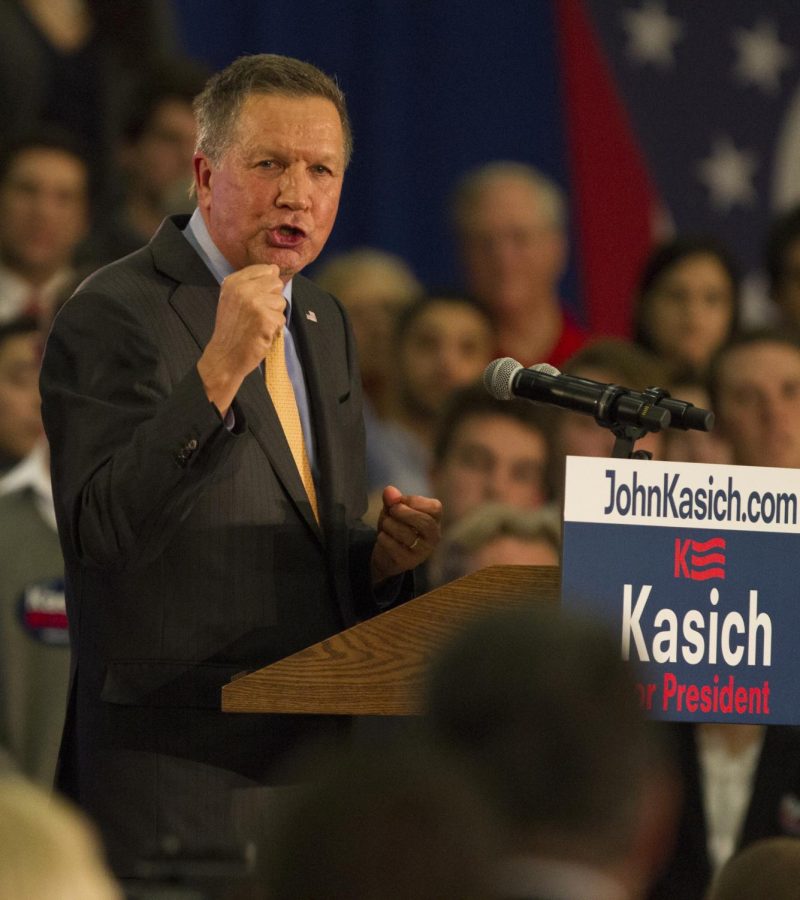 Gov. John Kasich speaks to a crowd of supporters at the Lou Higgins Recreation Center in Berea, Ohio after winning the Ohio Primary election Tuesday, March 15, 2016 .

In the white, brown and gold gym at Baldwin Wallace University, Ohio Gov. John Kasich’s campaign staff, volunteers and attendees gathered to see him celebrate his win in the Ohio primary election.

Kasich notched his first and only victory of the primary season by carrying his home state, but he has the fewest delegates of anyone still in the running.

In order to receive the Republican nomination, a candidate will need 1,237 delegates. Before Tuesday, Kasich stood at 70, compared to candidate Donald Trump’s lead of 460. Following his Ohio win, Kasich’s total delegate number rose to 136.

Tuesday’s primaries were especially important not only for Kasich, but Sen. Marco Rubio, who had hoped to secure a win in his home state of Florida. In Berea, people anticipated the results with a sense of hope and urgency.

As the results from various precincts trickled in, Rubio’s campaign met its demise when he lost Florida to Trump. In contrast, Kasich’s supporters only grew more enthralled when the numbers began to turn in his favor.

A line formed outside, filled with patiently waiting attendees of all ages. Inside, rows of neatly aligned chairs were positioned to see Kasich, who announced his candidacy for the presidential race in July 2015.

Chagrin Falls residents Lee and Linda Miller both expressed their hope for Kasich and his campaign.

“(Kasich) is honest and he has run a fantastic business in the state of Ohio,” Lee said. “We have a balanced budget. While I’m not inside of the show, it doesn’t seem to have any corruption.”

Nearly everyone in attendance wore a “Kasich Works” sticker, with some carrying posters. One supporter stood out, wearing a faded Mario hat and cardboard over his chest and back with a variety of phrases, including “Hi Pres. To Be!” and “Thank you pal!”

As the night continued, the sense of optimism hung in the air, growing as polls produced better and better results for the governor. The thunderous cheers echoing throughout the gym escalated as Kasich campaign members relayed the results when they came in.

Prior to Kasich’s appearance, Lt. Gov. Mary Taylor came on stage to introduce the governor.

“The only person who balanced the budget (in the state and Washington, D.C.) is John Kasich,” Taylor said. “Our guy is going to win.”

Throughout the night, the featured jazz band kept the spirit alive by playing for the audience, Manno keeping rhythm with his flags.

One supporter came all the way from Maryland. Ray Miles sat silently supporting Kasich in his anticipated night, sporting a “Democrats for Kasich” shirt.

“I’m a person who always comes to Ohio because Ohio gets to make the decisions,” Miles said.

In the white noise of conversation and music, an eruption of screams and cheers met the main screen in the front of the room, declaring in all caps: “Kasich wins Ohio.”

Chants of “O-H, I-O” could be heard echoed from one side of the room to the other.

With the news of the Kasich campaign’s victory, supporters expressed their belief in his potential to be the good the GOP and America needs.

“I have two concerns today: one is (to) stop Trump and Cruz because I think they both are a disgrace to this country,” Miles said. “Secondly, I’m really impressed with John Kasich, mainly for … his warm personality. I think he can be somebody that can promote healing, but the main thing is his concern for healthcare.”

Accompanied by his wife and two daughters, Kasich delivered his victory speech following welcoming chants of “Kasich” from the crowd.

Though one protestor was calmly escorted from the building by security after shouting phrases like “Trump” repeatedly, Kasich continued.

Baldwin Wallace student Mike Harlow attended with a friend to show their support for the Ohio governor.

“I came for the Bernie Sanders rally, but I was more excited to see Kasich,” he said.

Harlow mentioned the difference in crowds the two candidate’s rallies drew. Kasich had more of a mix of people, while Sanders had nearly no media coverage and consisted mostly of teenagers, he said. As the results came in, he was surprised.

“I was pretty stunned, to be honest,” he said “I think it’s good because I know that he’s won because of the success that he’s had here.”

At the end of the victorious night for the once stagnant campaign, Kasich left the audience on a note of pride and humility.

“We’re all part of a giant mosaic, a snapshot in time (of) all of us here,” he said. “And it’s our job as Americans, our job as people who want to be decent and live good lives … to dig down and understand that purpose, and never underestimate our ability to change the world. All I can do is thank you from the bottom of my heart.”

The Associated Press contributed reporting to this story.