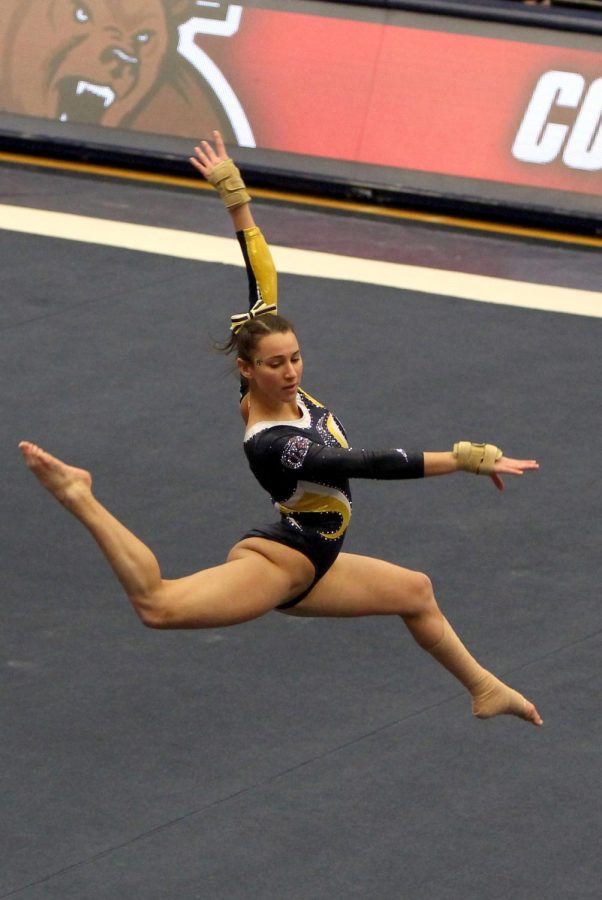 Junior Samantha Gordon leaps across the floor in the senior night competition against Cornell on March 5. The Goldend Flashes beat the Cornell Big Red Bears 196.000-193.175

A concussion kept sophomore gymnast Rachel Stypinski from competing for three weeks, but she plans to prove she’s “not an underdog” by making her all-around debut at the NCAA Regionals.

“I think instead of breaking me down, (being out for a few meets) has gotten me ready and more determined,” Stypinski said. “I know that people are looking at me like I don’t have a good advantage. I’m looked at as an underdog right now, and I don’t like being the underdog. I want to prove everyone wrong and come back stronger than I was before I got hurt and make it to (NCAA Nationals).”

Stypinski will add vault to her lineup to increase her chances at making it to Nationals as an all-around competitor should the Flashes fall Saturday.

The Kent State team did not qualify for Regionals in 2015. But an undefeated conference season and increased success on the road earned the Flashes a regional qualifying score of 195.595, the second highest score in the Mid-American Conference.

Junior Skyelee Lamano said Oklahoma may be the top team in the country, but Saturday’s meet is just like any other.

“We’re all doing the same skills,” Lamano said. “We all have with the same start values for the most part. Obviously we’d like to go in there and be the underdog and kick butt. It’s always fun to see where you’re at and see who gets those top two spots.”

Coach Brice Biggin said his goal is to earn a first or second place finish as a team.

“The big push is to get a team (to Nationals),” Biggin said. “And that way we’re all traveling. But (Stypinski) certainly is talented enough that, if she goes out and hits her first three events, she just needs to do a decent vault and she’ll at least put herself in a position (to go to Nationals). She just needs a lot of help from her friends and her teammates. We’re going to try our hardest to see what we can do as a team.”

Senior Nicolle Eastman said the team has become more confident in their abilities away from home. She described their progress as a “night and day difference” from the beginning of the season.

Biggin said making it to Regionals as a team shows the Flashes have improved.

“Qualifying for Regionals proves that we did do a better job away from home,” Biggin said. “We got back to (Regionals)– a meet that we really feel we should be at every year. Now it’s a matter of going out there and taking advantage of it. We need to go out and just worry about hitting our routines.”

Junior Jordan Hardison said Kent State needs to “keep the spirit up” Saturday and not “lose that focus.” Hardison said the Flashes may have lost focus March 19 at the Mid-American Conference Championships, causing them to finish fifth.

Biggin said it’s important for the Flashes to believe in themselves during Saturday’s competition.

“I want (the gymnasts) to go in with the utmost confidence that they belong and they’ve earned this spot,” Biggin said. “When you get to this level, if you start to look at the other teams and go ‘Gosh, we’re competing with the no. 1 team in the country,’ you get caught up in playing the game. I don’t want to play the game.”

Biggin earned his tenth MAC Coach of the Year title at the MAC Championships. He said the award is a “reflection on the (Kent State gymnastics) program and the way (the team) works together.”

Stypinski was honored, too, receiving the MAC Gymnast of the Year award despite not competing at the championship meet.

Assistant Coach Craig Ballard said he’s ready to “see if (the Flashes’) best is good enough to get them to (Nationals)” as they compete at 4 p.m. in Iowa City, Iowa.

“(I want to) leave everything out there,” Ballard said. “If we do our thing and it’s not good enough and somebody beats us because they’re better than us, then that’s fine. If we go out there and give it everything we’ve got and stick our routines, I like our chances.”

Elise Kogelnik is a sports reporter for The Kent Stater. Contact her at [email protected]